In this section, you analyze the factors that classify a murder as first-degree murder. Keep in mind that the criminal act, criminal intent, causation, and harm elements of murder have already been discussed.

States and the federal government usually include premeditated murder, murder by a specified means, and very serious felony murders in their first-degree murder statutes. Felony murder is discussed shortly.

Definition of Willful, Deliberate, and Premeditated

Most jurisdictions define willful as a specific intent to kill, purposely, or express malice. Jurisdictions differ when interpreting deliberate and premeditated. A minority of jurisdictions equate express malice or purposely with deliberation and premeditation, which means that the prosecution need only prove specific intent to kill for a first-degree premeditated murder conviction (Hawthorne v. State, 2010). However, this interpretation could blur the distinction between first and second-degree murder. The majority of jurisdictions have defined deliberate as calm and methodical, without passion or anger (People v. Anderson, 2011). Premeditated generally means the defendant reflected on the act or planned ahead (People v. Cole, 2011). In other words, if the defendant specifically intends to kill the victim and rationally, purposefully, takes steps that culminate in the victim’s death, the defendant has committed first-degree premeditated murder in many jurisdictions.

Often it is the act itself that proves the killing was willful, deliberate, and premeditated. If the killing is carried out in a manner that indicates a strong and calculated desire to bring about the victim’s death, the trier of fact can and often does conclude that the murder was premeditated (State v. Snowden, 2010).

Most jurisdictions agree that an extended period of time is not a requirement of premeditation (Commonwealth v. Carroll, 2010). Thus a murder can be premeditated and first degree even if it is conceived only moments before the actual killing (State v. Schrader, 2010). Some jurisdictions do not require any appreciable time lapse between the formation of intent and the criminal act (State v. Snowden, 2010).

Imagine that Joannie and her husband Tim are in a terrible fight in the kitchen. Tim tells Joannie that he is going to get a divorce and will thereafter seek full custody of their two young children. Joannie states, “Wait here. I need to go to the bathroom. I will be right back.” She walks down the hall, but goes into the bedroom, rather than the bathroom, and removes a handgun from the nightstand drawer. She then walks to the bathroom and flushes the toilet. Hiding the handgun in the pocket of her bathrobe, she walks back into the kitchen, removes it, and shoots Tim four times in the abdomen, killing him.

In this scenario, Joannie probably could be convicted of premeditated murder in most jurisdictions. Joannie shoots and kills Tim in a calm, methodical manner, evidencing deliberation. Her manufactured excuse and flushing of the toilet indicate planning. The act of shooting Tim four times shows that Joannie has a specific intent to kill and a strong and calculated desire to bring about Tim’s death. Note that timing is not an issue here. Even a few minutes are enough to carry out a premeditated murder if the proper facts are present.

Example of a Spontaneous Killing

Compare the previous example with this scenario. Frank, Dillon’s supervisor, calls Dillon into his office and fires him. Enraged, Dillon grabs a heavy brass paperweight from the top of Frank’s desk and strikes him in the forehead, killing him instantly. In this example, Dillon acts in anger, not calm, cool, reflection. The act of grabbing a heavy brass paperweight appears impulsive, not planned. There is no evidence to indicate that Dillon knew he would be fired or knew that there was a brass paperweight on Frank’s desk. In addition, the single blow to the head does not necessarily indicate that Dillon had a strong and calculated desire to kill Frank. Dillon’s conduct may be supported by murder intent (most likely implied malice, knowingly, or recklessly under circumstances manifesting extreme indifference to the value of human life), but there is no evidence of specific intent to kill, deliberation, or premeditation. Thus Frank’s killing would probably not be first-degree premeditated murder in most jurisdictions.

Murder by a Specified Means

Murder by a specified means is a specific method of killing that is extremely heinous. Most states list the specified means in their first-degree murder statutes. Some examples of commonly included specified means are murder by drive-by shooting, destructive device like a bomb, weapon of mass destruction, ammunition designed to puncture a bulletproof vest, poison, torture, or lying in wait, which is an ambush-style killing (Cal. Penal Code, 2010). Note that all the aforementioned methods of killing involve premeditation to a certain extent and could also probably qualify as first-degree premeditated murder. 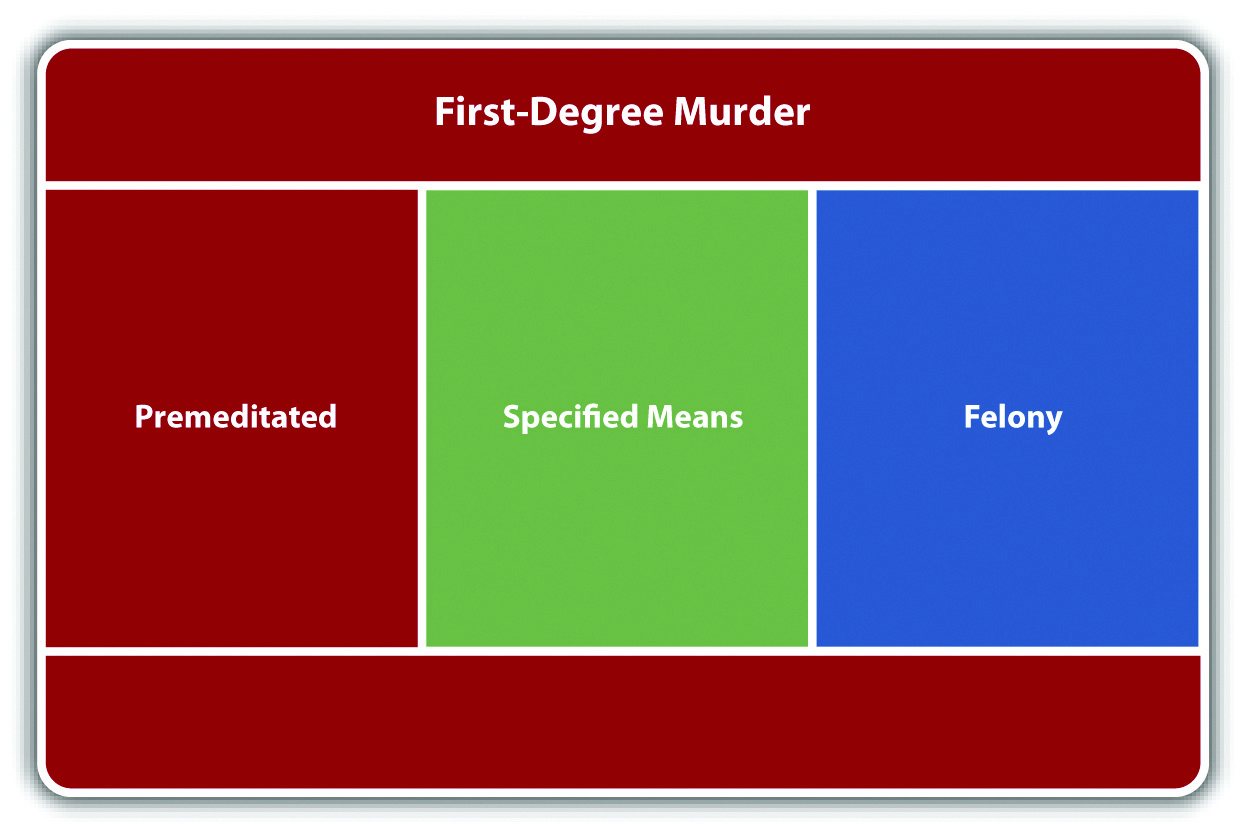 A jury convicted Scott Peterson of first-degree premeditated murder for the killing of his pregnant wife Laci Peterson. They also convicted him of second-degree murder for the killing of his unborn son Conner (Montaldo, C. 1, 2010). The governing statute was California Penal Code § 189 (Cal. Penal Code, 2010). After issuing the verdict, the jury sentenced Peterson to death based on the special circumstance of killing more than one person (Montaldo, C. 2, 2010).

The prosecution was successful without direct evidence or proof of the cause of death (Montaldo, C. 1, 2010).