Blood transfusions in humans were risky procedures until the discovery of the major human blood groups by Karl Landsteiner, an Austrian biologist and physician, in 1900. Until that point, physicians did not understand that death sometimes followed blood transfusions, when the type of donor blood infused into the patient was incompatible with the patient’s own blood. Blood groups are determined by the presence or absence of specific marker molecules on the plasma membranes of erythrocytes. With their discovery, it became possible for the first time to match patient-donor blood types and prevent transfusion reactions and deaths.

Antigens are substances that the body does not recognize as belonging to the “self” and that therefore trigger a defensive response from the leukocytes of the immune system. (Seek more content for additional information on immunity.) Here, we will focus on the role of immunity in blood transfusion reactions. With RBCs in particular, you may see the antigens referred to as isoantigens or agglutinogens (surface antigens) and the antibodies referred to as isoantibodies or agglutinins. In this chapter, we will use the more common terms antigens and antibodies.

Antigens are generally large proteins, but may include other classes of organic molecules, including carbohydrates, lipids, and nucleic acids seen on RBCs. Following an infusion of incompatible blood, erythrocytes with foreign antigens appear in the bloodstream and trigger an immune response. Proteins called antibodies (immunoglobulins), which are produced by certain B lymphocytes called plasma cells, attach to the antigens on the plasma membranes of the infused erythrocytes and cause them to adhere to one another.

More than 50 antigens have been identified on erythrocyte membranes, but the most significant in terms of their potential harm to patients are classified in two groups: the ABO blood group and the Rh blood group.

Normally the body must be exposed to a foreign antigen before an antibody can be produced. This is not the case for the ABO blood group. Individuals with type A blood—without any prior exposure to incompatible blood—have preformed antibodies to the B antigen circulating in their blood plasma. These antibodies, referred to as anti-B antibodies, will cause agglutination and hemolysis if they ever encounter erythrocytes with B antigens. Similarly, an individual with type B blood has pre-formed anti-A antibodies. Individuals with type AB blood, which has both antigens, do not have preformed antibodies to either of these. People with type O blood lack antigens A and B on their erythrocytes, but both anti-A and anti-B antibodies circulate in their blood plasma.

The Rh blood group is classified according to the presence or absence of a second erythrocyte antigen identified as Rh. (It was first discovered in a type of primate known as a rhesus macaque, which is often used in research, because its blood is similar to that of humans.) Although dozens of Rh antigens have been identified, only one, designated D, is clinically important. Those who have the Rh D antigen present on their erythrocytes—about 85 percent of Americans—are described as Rh positive (Rh+) and those who lack it are Rh negative (Rh−). Note that the Rh group is distinct from the ABO group, so any individual, no matter their ABO blood type, may have or lack this Rh antigen. When identifying a patient’s blood type, the Rh group is designated by adding the word positive or negative to the ABO type. For example, A positive (A+) means ABO group A blood with the Rh antigen present, and AB negative (AB−) means ABO group AB blood without the Rh antigen.

Besides being a consideration for blood transfusion, parents who differ based on Rh status must be cautious to ensure that maternal antibodies do not destroy their child’s red blood cells during fetal development, which can cause hemolytic anemia.

Table summarizes the distribution of the ABO and Rh blood types within the United States.

Clinicians are able to determine a patient’s blood type quickly and easily using commercially prepared antibodies. An unknown blood sample is allocated into separate wells. Into one well a small amount of anti-A antibody is added, and to another a small amount of anti-B antibody. If the antigen is present, the antibodies will cause visible agglutination of the cells. The blood should also be tested for Rh antibodies.

Cross Matching Blood Types :
This sample of a commercially produced “bedside” card enables quick typing of both a recipient’s and donor’s blood before transfusion. The card contains three reaction sites or wells. One is coated with an anti-A antibody, one with an anti-B antibody, and one with an anti-D antibody (tests for the presence of Rh factor D). Mixing a drop of blood and saline into each well enables the blood to interact with a preparation of type-specific antibodies, also called anti-seras. Agglutination of RBCs in a given site indicates a positive identification of the blood antigens, in this case A and Rh antigens for blood type A+. For the purpose of transfusion, the donor’s and recipient’s blood types must match.
ABO Transfusion Protocols
To avoid transfusion reactions, it is best to transfuse only matching blood types; that is, a type B+ recipient should ideally receive blood only from a type B+ donor and so on. That said, in emergency situations, when acute hemorrhage threatens the patient’s life, there may not be time for cross matching to identify blood type. In these cases, blood from a universal donor—an individual with type O− blood—may be transfused. Recall that type O erythrocytes do not display A or B antigens. Thus, anti-A or anti-B antibodies that might be circulating in the patient’s blood plasma will not encounter any erythrocyte surface antigens on the donated blood and therefore will not be provoked into a response. One problem with this designation of universal donor is if the O− individual had prior exposure to Rh antigen, Rh antibodies may be present in the donated blood. Also, introducing type O blood into an individual with type A, B, or AB blood will nevertheless introduce antibodies against both A and B antigens, as these are always circulating in the type O blood plasma. This may cause problems for the recipient, but because the volume of blood transfused is much lower than the volume of the patient’s own blood, the adverse effects of the relatively few infused plasma antibodies are typically limited. Rh factor also plays a role. If Rh−individuals receiving blood have had prior exposure to Rh antigen, antibodies for this antigen may be present in the blood and trigger agglutination to some degree. Although it is always preferable to cross match a patient’s blood before transfusing, in a true life-threatening emergency situation, this is not always possible, and these procedures may be implemented. 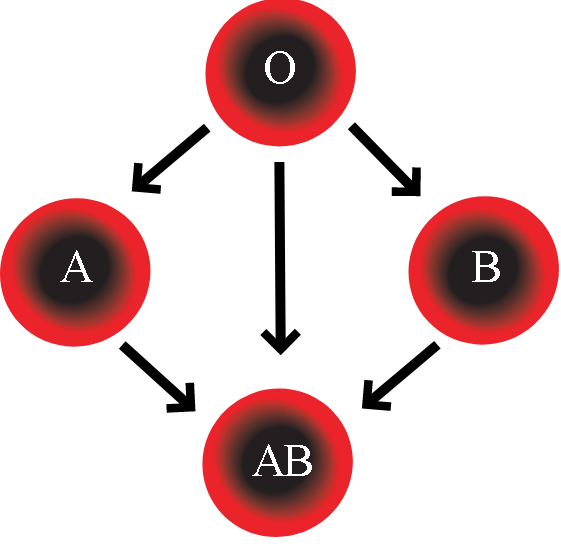 A patient with blood type AB+ is known as the universal recipient. This patient can theoretically receive any type of blood, because the patient’s own blood—having both A and B antigens on the erythrocyte surface—does not produce anti-A or anti-B antibodies. In addition, an Rh+ patient can receive both Rh+ and Rh− blood. However, keep in mind that the donor’s blood will contain circulating antibodies, again with possible negative implications.

At the scene of multiple-vehicle accidents, military engagements, and natural or human-caused disasters, many victims may suffer simultaneously from acute hemorrhage, yet type O blood may not be immediately available. In these circumstances, medics may at least try to replace some of the volume of blood that has been lost. This is done by intravenous administration of a saline solution that provides fluids and electrolytes in proportions equivalent to those of normal blood plasma. Research is ongoing to develop a safe and effective artificial blood that would carry out the oxygen-carrying function of blood without the RBCs, enabling transfusions in the field without concern for incompatibility. These blood substitutes normally contain hemoglobin- as well as perfluorocarbon-based oxygen carriers.

If a patient receives blood during a transfusion that is not compatible with his or her blood type, severe problems can occur. Acute hemolytic transfusion reactions occur if donated blood cells are attacked by matching host antibodies. This can cause shock-like symptoms, such as fever, hypotension, and disseminated intravascular coagulation from immune system mediated endothelial damage. Transfusion reactions are also associated with acute renal failure. Lung injury is common as well, due to pulmonary edema from fluid overload if plasma volume becomes too high or neutrophil activation during a transfusion reaction. If the donated blood is contaminated with bacteria, it may induce septic shock in the patient.

Hemolytic disease of the newborn (HDN) or erythroblastosis fetalis:

In contrast to the ABO group antibodies, which are preformed, antibodies to the Rh antigen are produced only in Rh− individuals after exposure to the antigen. This process, called sensitization, occurs following a transfusion with Rh-incompatible blood or, more commonly, with the birth of an Rh+ baby to an Rh− mother. Problems are rare in a first pregnancy, since the baby’s Rh+ cells rarely cross the placenta (the organ of gas and nutrient exchange between the baby and the mother). However, during or immediately after birth, the Rh− mother can be exposed to the baby’s Rh+ cells (Figure 3). Research has shown that this occurs in about 13−14 percent of such pregnancies. After exposure, the mother’s immune system begins to generate anti-Rh antibodies. If the mother should then conceive another Rh+ baby, the Rh antibodies she has produced can cross the placenta into the fetal bloodstream and destroy the fetal RBCs. This condition, known as hemolytic disease of the newborn (HDN) or erythroblastosis fetalis, may cause anemia in mild cases, but the agglutination and hemolysis can be so severe that without treatment the fetus may die in the womb or shortly after birth. 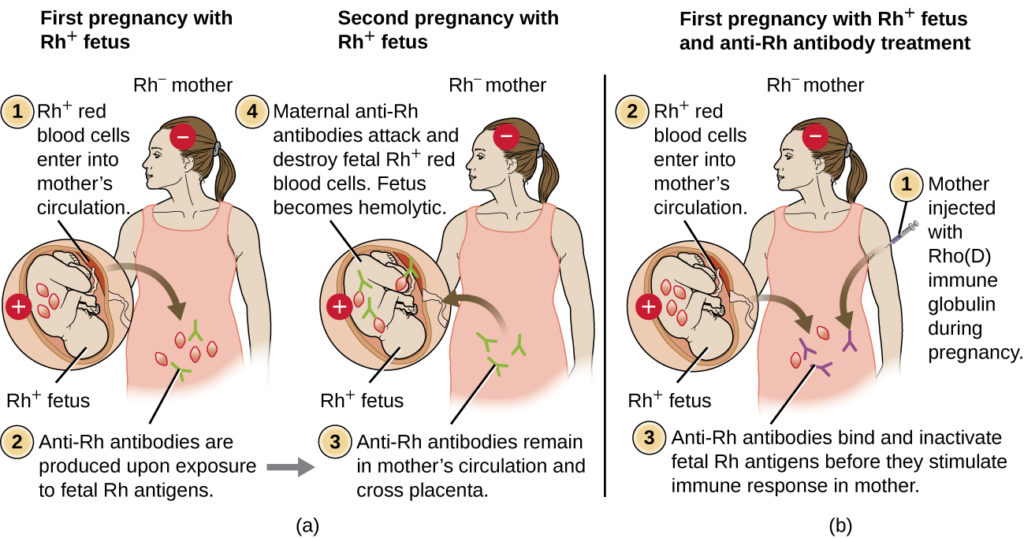 Figure 3: (a) When an Rh− mother has an Rh+ fetus, fetal erythrocytes are introduced into the mother’s circulatory system before or during birth, leading to production of anti-Rh IgG antibodies. These antibodies remain in the mother and, if she becomes pregnant with a second Rh+ baby, they can cross the placenta and attach to fetal Rh+ erythrocytes. Complement-mediated hemolysis of fetal erythrocytes results in a lack of sufficient cells for proper oxygenation of the fetus. (b) HDN can be prevented by administering Rho(D) immune globulin during and after each pregnancy with an Rh+ fetus. The immune globulin binds fetal Rh+ RBCs that gain access to the mother’s bloodstream, preventing activation of her primary immune response.

Figure 4:  Erythroblastosis Fetalis The first exposure of an Rh− mother to Rh+ erythrocytes during pregnancy induces sensitization. Anti-Rh antibodies begin to circulate in the mother’s bloodstream. A second exposure occurs with a subsequent pregnancy with an Rh+ fetus in the uterus. Maternal anti-Rh antibodies may cross the placenta and enter the fetal bloodstream, causing agglutination and hemolysis of fetal erythrocytes.

A drug known as RhoGAM, short for Rh immune globulin, can temporarily prevent the development of Rh antibodies in the Rh− mother, thereby averting this potentially serious disease for the fetus. RhoGAM antibodies destroy any fetal Rh+ erythrocytes that may cross the placental barrier. RhoGAM is normally administered to Rh− mothers during weeks 26−28 of pregnancy and within 72 hours following birth. It has proven remarkably effective in decreasing the incidence of HDN. Earlier we noted that the incidence of HDN in an Rh+subsequent pregnancy to an Rh− mother is about 13–14 percent without preventive treatment. Since the introduction of RhoGAM in 1968, the incidence has dropped to about 0.1 percent in the United States.