The central nervous system is able to make conscious decisions about how to react to information, such as deciding how to change our behavior if we are cold or in pain. Another option is to use the sensory information to inform a visceral reflex arc, like those involved in the regulation of blood pressure or body temperature. Here we will consider using sensory information to inform somatic reflexes, where automatic motor responses occur as a result of the sensory stimuli.

No matter which type of CNS mediated reflex or response we are referring to, the general model is the same. Sensory information activates a receptor that sends information to the CNS via an afferent neuron, some level of synaptic or higher level processing occurs, and, if a response is necessary or appropriate, the response is initiated through efferent neurons. You might recognize this as the same model used to maintain homeostasis. Reflexes are a unique category of responses because they do not require the higher centers used for conscious or voluntary responses. Instead reflexes are involuntary, stereotyped (they are repeatable under the same stimulus conditions) responses that occur quickly.

As mentioned, reflexes can either be visceral or somatic. Visceral reflexes involve a glandular or non-skeletal muscular response carried out in internal organs such as the heart, blood vessels, or structures of the GI tract. They utilize neurons of the autonomic nervous system to elicit their actions. Visceral reflexes have been more fully discussed in the section on the autonomic nervous system. In contrast, somatic reflexes involve unconscious skeletal muscle motor responses. In doing so, these reflexes utilize some of the same lower motor neurons (alpha motor neurons) used to control skeletal muscle during conscious movement. Because reflexes are quick, it makes sense that somatic reflexes are often meant to protect us from injury. As examples, reflexes contribute to the maintenance of balance and rapid withdrawal of the hand or foot from damaging stimuli.

Somatic reflexes can either be intrinsic (present at birth) or learned. We will be focusing on intrinsic reflexes, which occur as the result of normal human development. Learned reflexes are much more complicated in their anatomical structure and result from repetitive actions, such as athletic training. Reflexes can also be categorized by the number of synapses they involve (monosynaptic reflex versus polysynaptic reflex) or the relative position of the sensory receptors to the responding muscles (ipsilateral = same side of the body, contralateral = opposite sides of the body).

One of the simplest reflexes is a stretch reflex. In this reflex, when a skeletal muscle is stretched, a muscle spindle in the belly of the muscle is activated. The axon from this receptor travels to the spinal cord where it synapses with the motor neuron controlling the muscle, stimulating it to contract. This is a rapid, monosynaptic, ipsilateral reflex that helps to maintain the length of muscles and contributes to joint stabilization. A common example of this reflex is the knee jerk reflex that is elicited by a rubber hammer striking against the patellar tendon, such as during a physical exam. When the hammer strikes, it stretches the tendon, which pulls on the quadriceps femoris muscle. Because bones and tendons do not typically pull muscles, the muscle “thinks” it is stretching very rapidly, and the reflex acts to counteract this stretch. In doing so, the “knee jerk” occurs. 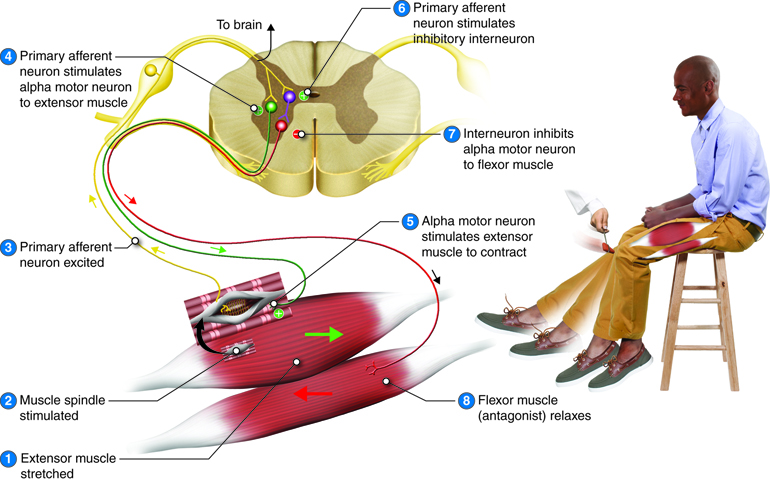 Stretch Reflex. When a muscle is stretched (1), muscle spindles (2) send information to the spinal cord (3) where it synapses on motor neuron of the same muscle (4) causing it to contract (5). At the same time, stimulation of an inhibitory interneuron (6) prevents contraction of the antagonistic muscle (7 and 8). This work by Cenveo is licensed under a Creative Commons Attribution 3.0 United States (http://creativecommons.org/licenses/by/3.0/us/).

Recall from the beginning of this unit that when you touch a hot stove, you reflexively pull your hand away. Sensory receptors in the skin sense extreme temperature and the early signs of tissue damage. To avoid further damage, information travels along the sensory fibers from the skin and into the posterior (dorsal) horn of the spinal cord. Once in the spinal cord, the sensory fibers synapse with a variety of interneurons that mediate the responses of the reflex. These responses included a strong initial withdrawal of the flexor muscle (caused by activation of the alpha motor neurons), inhibition of the extensor muscle (mediated through inhibitory interneurons), and sustained contraction of the flexor (mediated by a spinal cord neuronal circuit). And as already discussed, the sensory information will also travel to the brain to develop a conscious awareness of the situation such that conscious decision-making can take over immediately after the reflex occurs.

Imagine what would happen if, when you stepped on a sharp object, it elicited a strong withdrawal reflex of your leg. You would likely topple over. In order to prevent this from happening, as the flexor (withdrawal) reflex involving the injured leg happens, an extension reflex of the opposite (contralateral) leg occurs at the same time, creating a crossed-extensor reflex. In this case, the ipsilateral limb reacts with a withdrawal reflex (stimulating flexor muscles and inhibiting extensor muscles on same side), but the contralateral extensor muscles contract so that the person can appropriately shift balance to the opposite foot during the reflex. 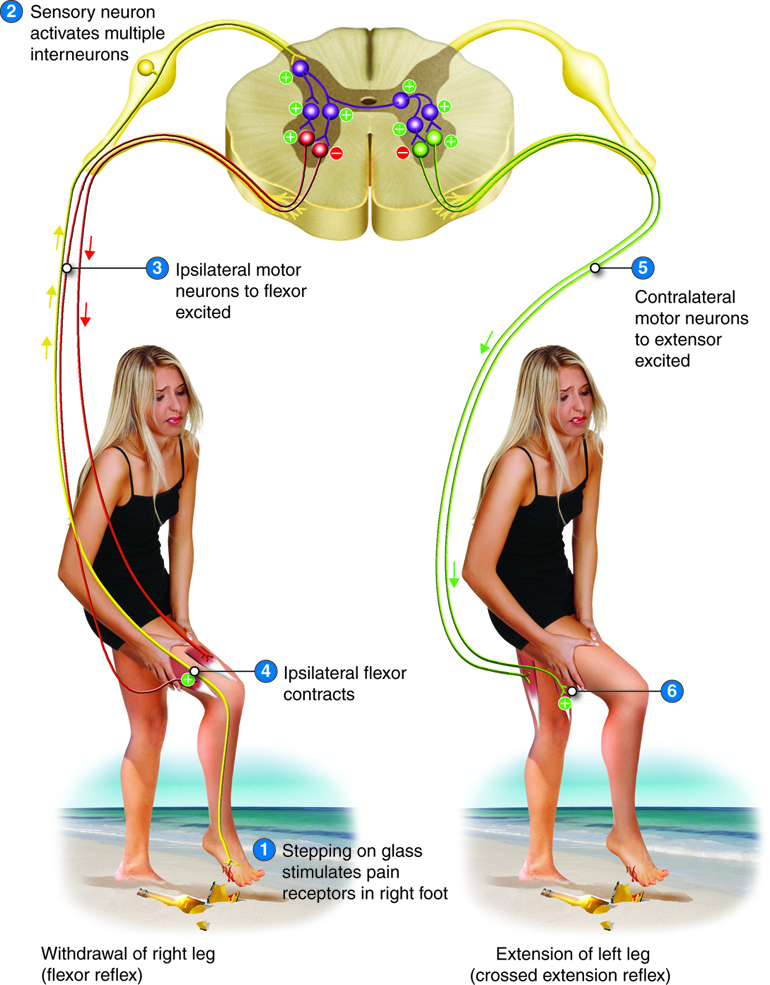 Crossed-Extensor Reflex. In this reflex, as withdrawal from the damaging stimulus occurs in the ipsilateral leg, extension occurs in the contralateral leg as a way of maintaining balance. This work by Cenveo is licensed under a Creative Commons Attribution 3.0 United States (http://creativecommons.org/licenses/by/3.0/us/).
Licenses and Attributions
CC licensed content, Shared previously