What is your brain made of?

Everything you can see, touch, smell, feel, and taste is made of atoms. Atoms are the basic building-block of all matter (including you and me, and everyone else you’ll ever meet), so if we want to know about what Earth is made of, then we have to know a few things about these incredibly small objects.

Everyday experience should convince you that matter is found in myriad forms, yet all the matter you have ever seen is made of atoms, or atoms stuck together in configurations of dizzying complexity. A chemical element is a substance that cannot be made into a simpler form by ordinary chemical means. The smallest unit of a chemical element is an atom , and all atoms of a particular element are identical.

Parts of an Atom

There are two parts to an atom ( Figure below ): 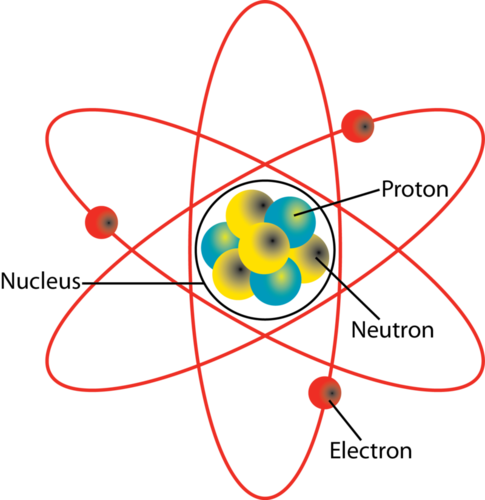 Major parts of an atom. What chemical element is this? (Hint: 3 protons, 3 electrons)

In the previous section we said that many atoms are more stable when they have a net charge: they are more stable as ions. When a cation gets close to an anion, they link up because of their different net charges — positive charges attract negative charges and vice versa. When two or more atoms link up, they create a molecule . A molecule of water is made of two atoms of hydrogen (H) and one atom of oxygen (O). The molecular mass is the sum of the masses of all the atoms in the molecule. A collection of molecules is called a compound.