Ocean water moves in predictable ways along the ocean surface. Surface currents can flow for thousands of kilometers and can reach depths of hundreds of meters. These surface currents do not depend on weather; they remain unchanged even in large storms because they depend on factors that do not change.

Winds on Earth are either global or local. Global winds blow in the same directions all the time and are related to the unequal heating of Earth by the Sun — that is, more solar radiation strikes the equator than the polar regions –- and the rotation of the Earth — that is, the Coriolis effect. The causes of the global wind patterns will be described in detail in the Earth’s Atmosphere chapter.

Water in the surface currents is pushed in the direction of the major wind belts:

Wind is not the only factor that affects ocean currents. The Coriolis effect describes how Earth’s rotation steers winds and surface ocean currents (Figure  below). Coriolis causes freely moving objects to appear to move to the right in the Northern Hemisphere and to the left in the Southern Hemisphere. The objects themselves are actually moving straight, but the Earth is rotating beneath them, so they seem to bend or curve. 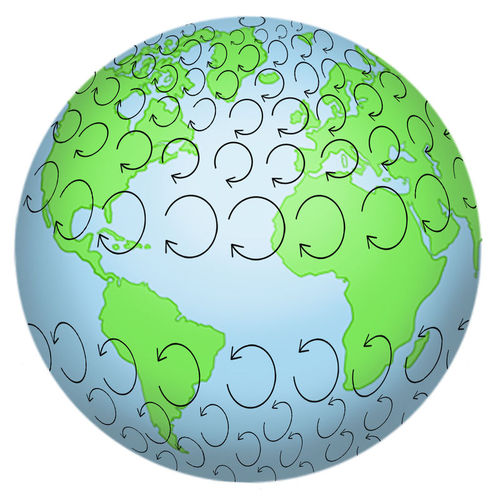 The Coriolis effect causes winds and currents to form circular patterns. The direction that they spin depends on the hemisphere that they are in.

Coriolis effect is demonstrated using a metal ball and a rotating plate in this video. The ball moves in a circular path just like a freely moving particle of gas or liquid moves on the rotating Earth (5b): http://www.youtube.com/watch?v=Wda7azMvabE (2:04).

Shape of the Ocean Basins

When a surface current collides with land, the current must change direction. In the Figure  below, the Atlantic South Equatorial Current travels westward along the equator until it reaches South America. At Brazil, some of it goes north and some goes south. Because of Coriolis effect, the water goes right in the Northern Hemisphere and left in the Southern Hemisphere. 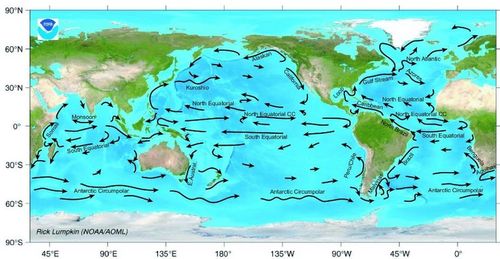 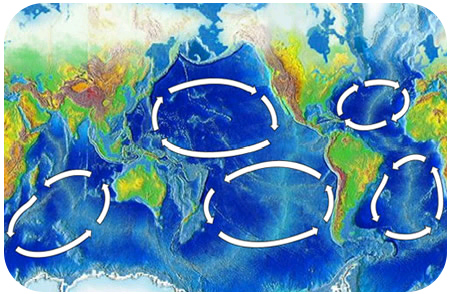 The Gulf Stream’s warm waters raise temperatures in the North Sea, which raises the air temperatures over land between 3 to 6oC (5 to 11oF). London, U.K., for example, is at the same latitude as Quebec, Canada. However, London’s average January temperature is 3.8oC (38oF), while Quebec’s is only -12oC (10oF). Because air traveling over the warm water in the Gulf Stream picks up a lot of water, London gets a lot of rain. In contrast, Quebec is much drier and receives its precipitation as snow.

In a satellite image of water temperature in the western Atlantic it is easy to pick out the Gulf Stream, which brings warmer waters from the equator up eastern North America.

Two things then happen. The dense water pushes deeper water out of its way and that water moves along the bottom of the ocean. This deep water mixes with less dense water as it flows. Surface currents move water into the space vacated at the surface where the dense water sank (Figure  below). Water also sinks into the deep ocean off of Antarctica.

Cold water (blue lines) sinks in the North Atlantic, flows along the bottom of the ocean and upwells in the Pacific or Indian. The water then travels in surface currents (red lines) back to the North Atlantic. Deep water also forms off of Antarctica.

Since unlimited amounts of water cannot sink to the bottom of the ocean, water must rise from the deep ocean to the surface somewhere. This process is called upwelling (Figure  below).

Upwelling forces denser water from below to take the place of less dense water at the surface that is pushed away by the wind.

Generally, upwelling occurs along the coast when wind blows water strongly away from the shore. This leaves a void that is filled by deep water that rises to the surface.

Upwelling is extremely important where it occurs. During its time on the bottom, the cold deep water has collected nutrients that have fallen down through the water column. Upwelling brings those nutrients to the surface. Those nutrient support the growth of plankton and form the base of a rich ecosystem. California, South America, South Africa, and the Arabian Sea all benefit from offshore upwelling.

An animation of upwelling is seen here: http://oceanservice.noaa.gov/education/kits/currents/03coastal4.html.