Throughout human history, people have discovered fossils and wondered about the creatures that lived long ago. In ancient times, fossils inspired legends of monsters and other strange creatures. The Chinese writer Chang Qu reports the discovery of “dragon bones”, which were probably dinosaur fossils in China 2,000 years ago. The griffin, a mythical creature with a lion’s body and an eagle’s head and wings, was probably based on skeletons of Protoceratops that were discovered by nomads in Central Asia (Figure 11.1).

Another fossil reminded the Greeks of the coiled horns of a ram. The Greeks named them ammonites after the ram god Ammon. Similarly, legends of the Cyclops may be based on fossilized elephant skulls found in Crete and other Mediterranean islands. Can you see why (Figure 11.2)?

Many of the real creatures whose bones became fossilized were no less marvelous than the mythical creatures they inspired (Figure 11.3). The giant pterosaur Quetzalcoatlus had a wingspan of up to 12 meters (39 feet). The dinosaur Argentinosaurus had an estimated weight of 80,000 kg, equal to the weight of seven elephants! Other fossils, such as the trilobite and ammonite, impress us with their bizarre forms and delicate beauty.

A fossil is any remains or trace of an ancient organism. Fossils include body fossils, left behind when the soft parts have decayed away, as well as trace fossils, such as burrows, tracks, or fossilized waste (feces) (Figure 11.4). 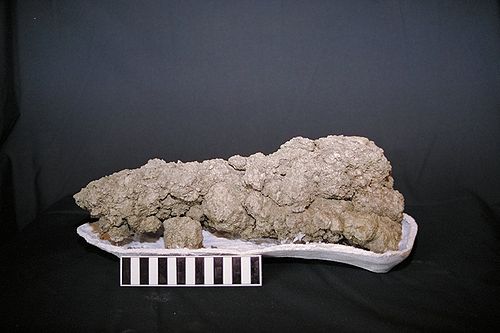 Figure 11.4: Coprolite (fossilized waste or feces) from a meat-eating dinosaur.

The process of a once living organism becoming a fossil is called fossilization. Fossilization is a very rare process: of all the organisms that have lived on Earth, only a tiny percentage of them ever become fossils. To see why, imagine an antelope that dies on the African plain. Most of its body is quickly eaten by scavengers, and the remaining flesh is soon eaten by insects and bacteria, leaving behind only scattered bones. As the years go by, the bones are scattered and fragmented into small pieces, eventually turning into dust and returning their nutrients to the soil. It would be rare for any of the antelope’s remains to actually be preserved as a fossil. 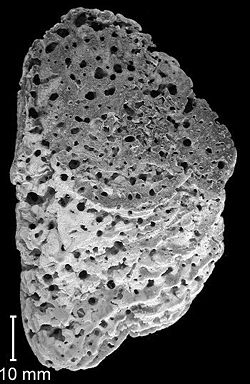 Figure 11.5: Fossil shell that has been attacked by a boring sponge.

For animals that lack hard shells or bones, fossilization is even more rare. As a result, the fossil record contains many animals with shells, bones, or other hard parts, and few softbodied organisms. There is virtually no fossil record of jellyfish, worms, or slugs. Insects, which are by far the most common land animals, are only rarely found as fossils. Because mammal teeth are much more resistant than other bones, a large portion of the mammal fossil record consists of teeth. This means the fossil record will show many organisms that had shells, bones or other hard parts and will almost always miss the many soft-bodied organisms that lived at the same time.

Because most decay and fragmentation occurs at the surface, the main factor that contributes to fossilization is quick burial. Marine animals that die near a river delta may be buried by sediment carried by the river. A storm at sea may shift sediment on the ocean floor, covering and helping to preserve skeletal remains.

On land, burial is rare, so consequently fossils of land animals and plants are less common than marine fossils. Land organisms can be buried by mudslides or ash from a volcanic eruption, or covered by sand in a sandstorm. Skeletons can be covered by mud in lakes, swamps, or bogs as well. Some of the best-preserved skeletons of land animals are found in the La Brea Tar Pits of Los Angeles, California. Although the animals trapped in the pits probably suffered a slow, miserable death, their bones were preserved perfectly by the sticky tar.

In spite of the difficulties of preservation, billions of fossils have been discovered, examined, and identified by thousands of scientists. The fossil record is our best clue to the history of life on Earth, and an important indicator of past climates and geological conditions as well. The fossil record also plays a key role in our lives. Fossil fuels such as coal, gas, and oil formed from the decayed remains of plants and animals that lived millions of years ago.

Fossilization can occur in many ways. Most fossils are preserved in one of five processes (Figure 11.6): preserved remains, permineralization, molds and casts, replacement, and compression.

The rarest form of fossilization is the preservation of original skeletal material and even soft tissue. For example, insects have been preserved perfectly in amber, which is ancient tree sap. Several mammoths and even a Neanderthal hunter have been discovered frozen in glaciers. These preserved remains allow scientists the rare opportunity to examine the skin, hair, and organs of ancient creatures. Scientists have collected DNA from these remains and compared the DNA sequences to those of modern creatures.

The most common method of fossilization is permineralization. After a bone, wood fragment, or shell is buried in sediment, it may be exposed to mineral-rich water that moves through the sediment. This water will deposit minerals into empty spaces, producing a fossil. Fossil dinosaur bones, petrified wood, and many marine fossils were formed by permineralization.

In some cases, the original bone or shell dissolves away, leaving behind an empty space in the shape of the shell or bone. This depression is called a mold. Later the space may be filled with other sediments to form a matching cast in the shape of the original organism. Many mollusks (clams, snails, octopi and squid) are commonly found as molds and casts because their shells dissolve easily.

In some cases, the original shell or bone dissolves away and is replaced by a different mineral. For example, shells that were originally calcite may be replaced by dolomite, quartz, or pyrite. If quartz fossils are surrounded by a calcite matrix, the calcite can be dissolved away by acid, leaving behind an exquisitely preserved quartz fossil.

Some fossils form when their remains are compressed by high pressure. This can leave behind a dark imprint of the fossil. Compression is most common for fossils of leaves and ferns, but can occur with other organisms, as well.

Some rock beds have produced exceptional fossils. Fossils from these beds may show evidence of soft body parts that are not normally preserved. Two of the most famous examples of soft organism preservation are the Burgess Shale in Canada and the Solnhofen Limestone in Germany. The Burgess Shale is 505 million years old and records the first explosion of shelled organisms in Earth’s oceans. Many of the Burgess Shale fossils are bizarre animals that seem unrelated to any other animal group. The Solnhofen Limestone is 145 million years old and contains fossils of many soft-bodied organisms that are not normally preserved, such as jellyfish. The most famous Solnhofen fossil is Archaeopteryx, one of the earliest birds. Although it resembles a dinosaur fossil, impressions of feathers can clearly be seen (Figure 11.7).

The fossil record shows clearly that over time, life on Earth has changed. Fossils in relatively young rocks tend to resemble animals and plants that are living today. In older rocks, fossils are less similar to modern organisms.

As scientists collected fossils from different rock layers and formations, they discovered that they could often recognize the rock layer by the assemblage of fossils it contained. Some fossils proved particularly useful in matching up rock layers from different regions. These fossils, calledindex fossils, are widespread but only existed for a relatively brief period of time. When a particular index fossil is found, the relative age of the bed is immediately known.

In contrast to index fossils, living fossils are organisms that have existed for a tremendously long period of time without changing very much at all. For example, the Lingulata brachiopods have existed from the Cambrian period to the present, a time span of over 500 million years! Modern specimens of Lingulata are almost indistinguishable from their fossil counterparts (Figure 11.8).

Fossils are our best form of evidence about the history of life on Earth. In addition, fossils can give us clues about past climates, the motions of plates, and other major geological events.

The first clue that fossils can give is whether an environment was marine (underwater) or terrestrial (on land). Along with the rock characteristics, fossils can indicate whether the water was shallow or deep, and whether the rate of sedimentation was slow or rapid. The amount of wear and fragmentation of a fossil can allow scientists to estimate the amount of wave action or the frequency of storms.

Often fossils of marine organisms are found on or near tall mountains. For example, the Himalayas, the tallest mountains in the world, contain trilobites, brachiopods, and other marine fossils. This indicates that rocks on the seabed have been uplifted to form huge mountains. In the case of the Himalayas, this happened when the Indian Subcontinent began to ram into Asia about 40 million years ago.

Fossils can also reveal clues about past climate. For example, fossils of plants and coal beds have been found in Antarctica. Although Antarctica is frozen today, in the past it must have been much warmer. This happened both because Earth’s climate has changed and because Antarctica has not always been located at the South Pole.

One of the most fascinating patterns revealed by the fossil record is a number of mass extinctions, times when many species died off. Although the mass extinction that killed the dinosaurs is most famous, the largest mass extinction in Earth history occurred at the end of the Permian period, about 250 million years ago. In this catastrophe, it is estimated that over 95% of species on Earth went extinct! The cause of these mass extinctions is not definitely known, but most scientists believe that collisions with comets or asteroids were the cause of at least a few of these disasters.

amber
Fossilized tree sap.
body fossil
The remains of an ancient organism. Examples include shells, bones, teeth, and leaves.
cast
A structure that forms when sediments fill a mold and harden, forming a replica of the original structure.
fossil
Any remains or trace of an ancient organism.
fossil fuel
A fuel that was formed from the remains of ancient organisms. Examples include coal, oil, and natural gas.
fossilization
The process of becoming a fossil.
index fossil
A fossil that identifies and shows the relative age of the rocks in which it is found. Index fossils come from species that were widespread but existed for a relatively brief period of time.
living fossil
A modern species or genus that has existed on Earth for millions of years without changing very much.
marine
Of or belonging to the sea.
mass extinction
A period of time when an unusually high number of species became extinct.
microfossil
A fossil that must be studied with the aid of a microscope.
mold
An impression made in sediments by the hard parts of an organism.
permineralization
A type of fossilization in which minerals are deposited into the pores of the original hard parts of an organism.
terrestrial
Of or belonging to the land.
trace fossil
Evidence of the activity of an ancient organism. Examples include tracks, trails, burrows, tubes, boreholes, and bite marks.