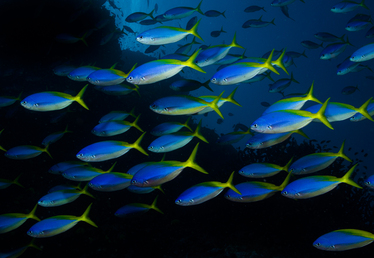 LIVING RESOURCES
The ocean provides important living and nonliving resources. To be maintained for future use, these resources must be managed sustainably. Most fish are caught by lines or nets as they swim in the open waters of the ocean. Some species of fish are being over-harvested, which means their rate of reproduction cannot keep up with the rate at which people consume them.Bottom trawling is a method of fishing that involves towing a weighted net across the seafloor to harvest fish. In many areas where bottom trawling is done, ecosystems are severely disturbed by the large nets. For this reason, in a few areas in the world, laws limit bottom trawling to waters not more than 1,000 m deep or waters far from protected and sensitive areas. Still these actions protect some of the seafloor. Besides food, ocean organisms have other uses. Some provide us with medications.

NONLIVING RESOURCES
Oil and natural gas are the most valuable non-living resources taken from the ocean. Extracting these resources requires drilling into the seafloor. Oil platforms have dozens of oil wells that are drilled in places where the ocean is sometimes 2,000 m deep. A description of the Deepwater Horizon oil spill affecting the Gulf of Mexico is located in the Human Actions and Earth’s Waters chapter.

The seafloor has some valuable minerals. Manganese nodules containing manganese, iron, copper, nickel, phosphate, and cobalt may be as small as a pea or as large as a basketball. Estimates are that there may be as much as 500 billion tons of nodules on the seafloor. The minerals in manganese nodules have many uses in the industrial world, but currently they are not being mined. Think back to the discussion of ore deposits in the Earth’s Minerals chapter. Why do you think these seafloor resources are not being mined?

Oceans are a harsh placed to live. In the intertidal zone, conditions change rapidly as water covers and uncovers the region and waves pound on the rocks. Most of the environments at sea are cold and at just about any depth below the surface the pressure is very high. Beyond the photic zone, the ocean is entirely black. Organisms have adapted to these conditions in many interesting and effective ways. The size and variety of different habitats means that the oceans are home to a large portion of all life on Earth. It’s interesting to note that the smallest and largest animals on Earth live in the oceans.

Marine animals breathe air or extract oxygen from the water. Some float on the surface and others dive into the ocean’s depths. There are animals that eat other animals, and plants generate food from sunlight. A few bizarre creatures break down chemicals to make food! The following section divides ocean life into seven basic groups. 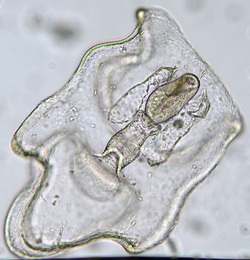 PLANKTON
Plankton are organisms that cannot swim but that float along with the current. The word “plankton” comes from the Greek for wanderer. Most plankton are microscopic, but some are visible to the naked eye.Phytoplankton are tiny plants that make food by photosynthesis. Because they need sunlight, phytoplankton live in the photic zone. Phytoplankton are responsible for about half of the total primary productivity (food energy) on Earth. Like other plants, phytoplankton release oxygen as a waste product.

Zooplankton, or animal plankton, eat phytoplankton as their source of food. Some zooplankton live as plankton all their lives and others are juvenile forms of animals that will attach to the bottom as adults. Some small invertebrates live as zooplankton. 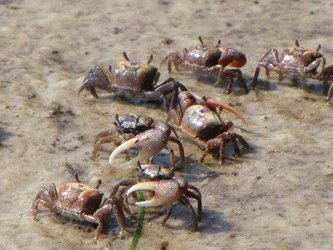 PLANTS AND ALGAE
The few true plants found in the oceans include salt marsh grasses and mangrove trees. Although they are not true plants, large algae, which are called seaweed, also use photosynthesis to make food. Plants and seaweeds are found in the neritic zone where the light they need penetrates so that they can photosynthesize.MARINE INVERTEBRATES
The variety and number of invertebrates, animals without a backbone, is truly remarkable. Marine invertebrates include sea slugs, sea anemones, starfish, octopi, clams, sponges, sea worms, crabs, and lobsters. Most of these animals are found close to the shore, but they can be found throughout the ocean. 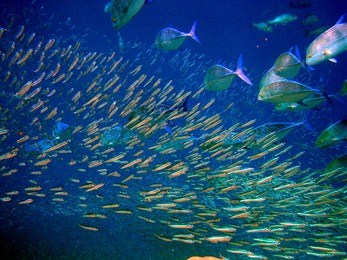 FISH
Fish are vertebrates; they have a backbone. What are some of the features fish have that allows them to live in the oceans? All fish have most or all of these traits. 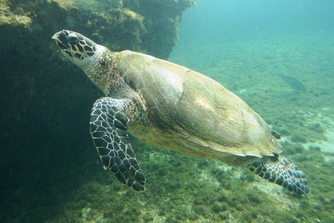 REPTILES
Only a few types of reptiles live in the oceans and they live in warm water. Why are reptiles so restricted in their ability to live in the sea? Sea turtles, sea snakes, saltwater crocodiles, and marine iguana that are found only at the Galapagos Islands sum up the marine reptile groups. Sea snakes bear live young in the ocean, but turtles, crocodiles, and marine iguanas all lay their eggs on land. 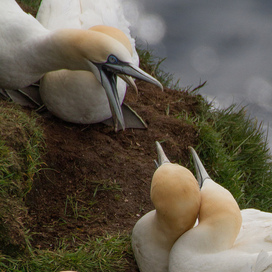 SEABIRDS AND MARINE MAMMALS
Many types of birds are adapted to living in the sea or on the shore. What are the common traits of mammals? Mammals are endothermic (warm-blooded) vertebrates that give birth to live young; feed them with milk; and have hair, ears, and a jaw bone with teeth. What traits might mammals have to be adapted to life in the ocean? 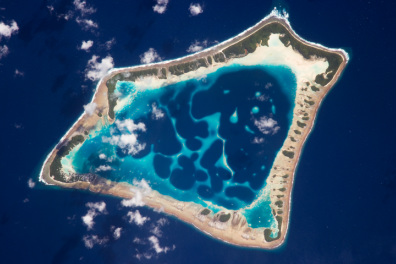 INTERTIDAL
A great abundance of life is found in the intertidal zone. High energy waves pound the organisms that live in this zone and so they must be adapted to pounding waves and exposure to air during low tides. Hard shells protect from pounding waves and also protect against drying out when the animal is above water. Strong attachments keep the animals anchored to the rock.

In a tide pool, as in the photo, what organisms are found where and what specific adaptations do they have to that zone? The mussels on the top left have hard shells for protection and to prevent drying because they are often not covered by water. The sea anemones in the lower right are more often submerged and have strong attachments but can close during low tides. Many young organisms get their start in estuaries and so they must be adapted to rapid shifts in salinity.

REEFS
Corals and other animals deposit calcium carbonate to create rock reefs near the shore. Coral reefs are the “rainforests of the oceans” with a tremendous amount of species diversity.

Reefs can form interesting shapes in the oceans. Remember that hot spots create volcanoes on the seafloor. If these volcanoes rise above sea level to become islands, and if they occur in tropical waters, coral reefs will form on them. Since the volcanoes are cones, the reef forms in a circle around the volcano. As the volcano comes off the hot spot, the crust cools. The volcano subsides and then begins to erode away. Eventually, all that is left is a reef island called an atoll. A lagoon is found inside the reef.