Digging for Food in Early New York: Introduction and Link 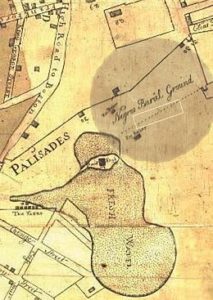 Nan Rothschild is an historical archeologist and Associate Professor at Columbia University. Jonathan Deutsch is a trained chef and Assistant Professor in Department of Food and Hospitality at Kingsborough Community College, CUNY. Annie Hauck-Lawson is president of the Association for the Study of Food and Society and Associate Professor of foods and nutrition at Brooklyn College (ret.).

Rothschild begins her essay by stating, “Food forms the core of a person, both physically and metaphorically, in its expression of identity when people of different social classes and ethnic backgrounds select or favor certain items (50). What people ate, or refused to eat, how they procured and prepared their food, tells us who they are and describes their culture (as Brillat-Savarin famously noted). But how do we know what people who lived hundreds of years ago ate? We can examine the written texts they left, such as cookbooks (either professionally published or handwritten recipe collections), in addition to restaurant menus, personal letters and diaries. As an historical archeologist, Rothschild looks at other physical evidence. Based on real estate records, she looks for identified households and their privies and garbage remains, their middens. She pays particular attention to the so-called African Burial ground that was unearthed in 1991 in lower Manhattan. This site contained both the physical remains of African slaves living in New York City in the Eighteenth Century and the remains of what they ate. She finds special significance in the bones of these individuals and the animals they ate, called faunal research.  She also looks at evidence from identified dwellings of families representing different ethnic and cultures in New York, including a bordello. Her essay is an excellent example of archeological research.

The text can be found as an Ebsco Ebook: