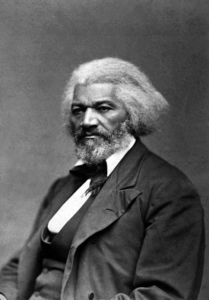 Frederick Douglass (1817-1895) published the Narrative of the Life of Frederick Douglass, An American Slave, Written by Himself in 1845. Douglass was born Frederick Augustus Washington Bailey in 1818 on a slave plantation in eastern Maryland. His mother, Harriet Bailey, was a slave at Holme Hill Farm. His father is unknown, but was a white man, rumored to be his mother’s owner, Aaron Anthony. After he died, Douglass (age 8) became the property of Thomas Auld and his wife Sophia in Baltimore. Finding Douglass to be an unusually inquisitive and intelligent child, Mrs. Auld begin to teach him to read. But Mr. Auld soon furiously stopped these lessons, since learning “would forever unfit him to be a slave.” Somehow, despite all the significant obstacles placed in his path (note the metaphors), including all the power of his owner and of slave culture, Douglass would build on Mrs. Auld’s few lessons and learn to read and write on his own. In Chapters VI and VII of his Narrative, Douglass powerfully recounts how he learned to read and write. The story abounds with insights about learning as liberation. He led one of the most heroically-inspiring American lives.