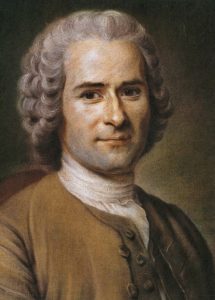 Jean Jacques Rousseau (1712-1778) was born in Switzerland and was orphaned by age ten. At age thirty, he traveled to Paris and began to establish himself in intellectual circles. He distinguished himself by writing essays and novels, many of which were declared controversial by French and Genevan authorities due to their critique of Christianity. His ideas influenced the French Revolution, which began shortly after his death. Rousseau’s most famous work, Du contrat social (The Social Contract), articulates the ideal relationship between the individual and the society in which he lives. Like Locke, Rousseau believed that humanity was created good. The first line of his novel Emile summarizes his political philosophy: “God makes all things good; man meddles with them and they become evil.”[1] As you read these excerpts from The Social Contract, pay close attention to Rousseau’s use of analogy as he unveils his theory of how individuals may, through consciously and willingly abdicating certain rights, create a society that will improve the common good.