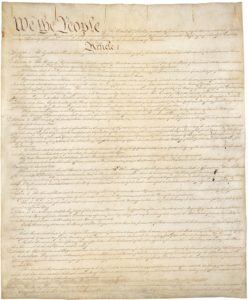 Page 1 of the U.S. Constitution

Unlike the Declaration of Independence, which served its purpose at a single point in history and is now a textual artifact, the Constitution of the United States is alive. This document, which sets forth the structure of the American government, was ratified by the thirteen colonies between 1787 (Delaware) and 1790 (Rhode Island). Since then, it has been amended twenty-seven times. The National Archives links to several important essays about the original Constitution, the Bill of Rights (Amendments 1–10), and Amendments 11-27. As you read the Constitution and its amendments in their entirety, take note of how Rousseau and Locke continue to influence American thought. You should also note anything that surprises or confuses you about this cornerstone of the United States of America.