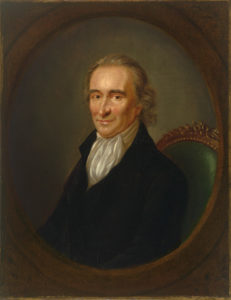 Thomas Paine was born in England and emigrated to the American colonies in 1774. While in England, he made the acquaintance of Benjamin Franklin, who helped him establish himself via letters of introduction. Paine’s pamphlet Common Sense, which was published in Philadelphia in January of 1776, argued that the colonies should declare independence from Great Britain. As you read these excerpts from Common Sense, pay close attention to his analysis of the English system of government and the conclusions that he draws from this analysis in order to assert his position about the necessity for American independence.