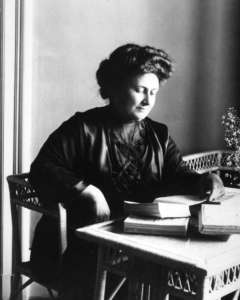 Maria Montessori (1870-1952) grew up in Rome. A gifted student, she overcame prejudice to study and graduate from the University of Rome’s medical school, becoming the first female physician in Italy. Her work with children inspired her to found the Casa dei Bambini in 1907, a revolutionary school located in one of the most downtrodden neighborhoods in Rome. The Montessori Method that arose from her school spawned international schools that continue today. There are currently 4,500 Montessori schools in the U.S. and 20,000 worldwide. Her child-centered educational model, described in the first chapter of her book The Montessori Method (1909), is replete with imagery that echoes the liberatory language of Frederick Douglass and Plato while anticipating educational revolutionaries such as Paolo Freire. For example, her progressive argument for an improved form of “scientific pedagogy,” contrasts methods that result in an “instrument of slavery” in the classroom and those that promote a “movement of social liberation.”