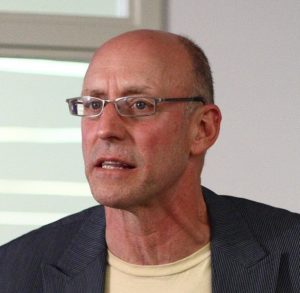 Michael Pollan (b. 1955) is a journalist, essayist, and professor of journalism at the UC Berkeley Graduate School of Journalism. Pollan is a contributing writer for the New York Times Magazine and a former executive editor for Harper’s Magazine. He has written five books. Pollan is well known for his work on the environment and food. Among his many honors, in 2009 he was named by Newsweek as one of the top 10 “New Thought Leaders.” The Omnivore’s Dilemma was named one of the ten best books of 2006 by both the New York Times and the Washington Post.

According to Michael Pollan, “The first time I opened Peter Singer’s “Animal Liberation,” I was dining alone at the Palm, trying to enjoy a rib-eye steak cooked medium-rare. If this sounds like a good recipe for cognitive dissonance (if not indigestion), that was sort of the idea. Preposterous as it might seem, to supporters of animal rights, what I was doing was tantamount to reading “Uncle Tom’s Cabin” on a plantation in the Deep South in 1852.” Pollan’s article, “An Animal’s Place,” was originally published in the New York Times Magazine on November 10, 2002. In his essay, Pollan considers the “place” of animals raised for food in contemporary America. He carefully considers the arguments advanced by Peter Singer in his book Animal Liberation, who claims that animal rights are the next civil rights movement.  Pollan argues against many of Singer’s claims, but is forced to acknowledge the many problems, especially the ethical issues, engendered by our treatment of animals in so-called “factory” farms.  Wallace’s essay “Consider the Lobster” (see the Exploration section) is, in part, indebted to Pollan and it is interesting to consider the conversation these two skilled writers are having about the ethics of inflicting pain on animals for our pleasure. Pollan will propose a compromise in his elaborate description of Polyface Farm in Virginia and how this farm treats its animals.