Plato, introduction to the “Allegory of the Cave” 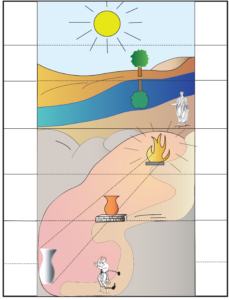 Plato’s “Allegory of the Cave”

We begin our explorations by reading examples of education as a process of fulfillment and liberation. Plato (428-347 B.C.E.), an aristocratic student of Socrates, grew up amid the deadly power struggles between Athens and Sparta. His philosophy, often associated with the development of idealism and antimaterialism, elevates spirit above sensory perception. His famous short narrative, “The Allegory of the Cave,” comprises Book VII of The Republic, his most elaborate analysis of what an ideal government would be like. The “Allegory” and its powerful imagery is one of the foundational documents of western thought and civilization; its echoes are everywhere. There are many ways to interpret this rich narrative, its imagery of slavery, liberation, and enlightenment. As we’ll see, Plato’s ideas and imagery resonate through many of the writers in this module who propose their own ideal educational systems.