In his 1998 essay “‘Only Connect’: The Goals of a Liberal Education,” American historian William Cronon interrogates the notion of a “liberal education.” After exploring the etymology of the word “liberal” and the history of the “liberal arts,” he turns to the question of what a liberal education looks like in our contemporary moment. After asserting that a liberal education “aspires to nurture the growth of human talent in the service of human freedom” (1), Cronon questions whether the lengthy “liberal arts” course requirements at most colleges and universities are designed to meet this goal. As an alternative to lists of courses, he offers a list of personal attributes that exemplify a liberally educated person. He concludes this list with a powerful statement about the importance of learning to connect with others:

More than anything else, being an educated person means being able to see connections that allow one to make sense of the world and act within it in creative ways… A liberal education is about gaining the power and the wisdom, the generosity and the freedom to connect (5). 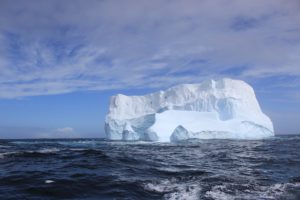 The texts in this course have been compiled with the principle of “only connect” in mind. Each module, or unit, consists of a series of readings linked by a common theme. For example, in the American Government module, you will begin by reading the work of the Enlightenment philosophers who inspired Thomas Jefferson and the other Founding Fathers as they created the Declaration of Independence and The U.S. Constitution. In the Education module, you will notice a common theme of education as a source of freedom, both figuratively and literally.

Each text in this curriculum is like an iceberg: intriguing–and perhaps even forbidding–at first glance, but far more complex when you look beneath the surface. Avoid being a passive reader of these texts. Look up words you don’t know. Use library and web resources to enrich and clarify your understanding. Consider your personal relationship to each reading. Ask questions in class. Debate respectfully with your peers. Attend your professor’s office hours. Create study groups.

Cronon, William. “‘Only Connect’: The Goals of a Liberal Education.” The American Scholar, vol. 67, no. 4, Autumn 1998, https://www.williamcronon.net/writing/cronon_only_connect.pdf. Accessed 26 August 2019.