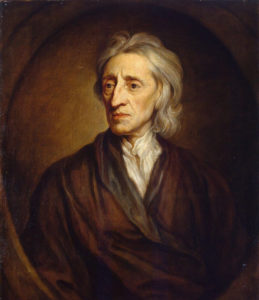 John Locke was an English philosopher who lived from 1632 – 1704. Educated at Christ’s Church College at Oxford University, he went on to become one of the foremost philosophers of the Enlightenment. Locke is perhaps most famous for his theory of the human mind. He believed that at birth, the mind is a tabula rasa (blank slate) “upon which the world describes itself through the experience of the five senses” (“John Locke”).[1] In contrast to his contemporary fellow philosopher Thomas Hobbes, Locke described the natural state of man as “a state of perfect freedom to order their actions, and dispose of their possessions and persons, as they think fit, within the bounds of the law of nature, without asking leave, or depending upon the will of any other man.” This attitude formed the basis of his political philosophy. As you read these excerpts from his essay The Second Treatise of Government, pay attention to how Locke structures his argument, as well as how he works with the ideas of other philosophers such as Richard Hooker. You will also wish to take special note of any ideas that seem familiar from or relevant to contemporary political discourse.