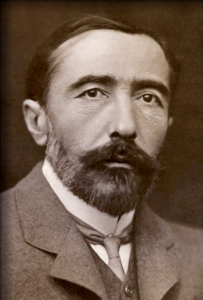 Joseph Conrad was born in Berdyczow, which, at the time of his birth, on December 3, 1857, was a city in Ukraine. His birth name was Jozef Teodor Konrad Korzeniowski, anglicized years later when he became a British citizen. Before one of those border realignments that regularly occur in that part of the world, Berdyczow had been a part of the Kingdom of Poland. The distinction is important because Polish nationalism shaped Conrad’s early years. His parents were Polish nobility, and Conrad’s father, in addition to working as a writer and a translator, was a political activist, whose goal was to free Poland from Russian domination.  For this, he was arrested and his family exiled to Vologda. Within seven years, both of Conrad’s parents had died of tuberculosis and he was sent to live with his mother’s brother, his Uncle Tadeusz, in Krakow.

Determined to be a sailor, Conrad left home at 16 and moved to Marseilles, France, where he began his apprenticeship, working entry-level positions on several merchant ships. His career floundered, however, when he learned that to continue this line of work he needed the permission from the Russian consul, who was more likely to conscript Conrad into the Russian army than grant permission. Moreover, Conrad had gambling debts he could not pay. In despair, he wounded himself in the chest in a half-hearted suicide attempt, which prompted his uncle to settle Conrad’s debts and to help him relocate to England. For the next 16 years, Conrad worked in the British mercantile marine, rising in rank to master mariner. In 1886, at the age of 29, he became a British citizen.

In 1890, Conrad captained a steamer up the Congo River, an adventure that inspired Heart of Darkness. As a Pole whose father was a political activist fighting to rebuild a nation ruthlessly conquered by other European powers, Conrad was sensitive to the exploitation and disruption that occurs when one culture will use any means, including aggressive military action, to impose its will upon another. The motive is often the theft of natural resources, such as oil, precious metals, or forests. In Heart of Darkness, it is ivory, valuable in Europe at the time for the manufacture of piano keys, elaborate chess pieces, jewelry, billiard balls, toiletry items, and ornaments of various kinds. Lured by the promise of wealth, adventurers and fortune hunters, with the blessing of Belgium’s King Leopold, who took his cut, rushed to the Congo ready and eager to decimate the elephant population and harvest its ivory. Heart of Darkness was first published in three installments in 1899 in Blackwoods Magazine. In 1902, it was one of the stories in Conrad’s book, Youth, a Narrative, and Two Other Stories. It is among Conrad’s best-known works, and one of the great novellas in the English language.

The plots of Conrad’s stories often revolve around the relationship between an opinionated but ethical main character—Marlow in Heart of Darkness and Lord Jim—and another essentially decent man, tempted and corrupted by the promise of wealth and power. Nostromo, for example, the head of the longshoreman’s union in a South American country in the midst of a revolution, is entrusted because of his reputation as the most brave and honourable of men to protect a shipment of silver, which the mine owner, Charles Gould, fears will fall into the hands of the revolutionaries. The boat in which Nostromo has hidden the silver is rammed by a warship belonging to the revolutionary forces. Nostromo saves and hides the silver on a deserted island, but he claims it sank with his boat. Embittered by his sense that the elite politicians and businessmen of his nation patronize him, Nostromo begins to recover the silver for himself until he is shot and killed by the island’s lighthouse keeper who mistakes Nostromo for an intruder. Such plots, conflicts, and moral dilemmas make for complex stories with the characters developed with considerable psychological intensity, anticipating the work of Conrad’s great successors: D. H. Lawrence, Virginia Woolf, and James Joyce.

Conrad’s style also makes him one of the great novelists of the late-19th and early-20th centuries. His plots are rich and complex, often forsaking a linear narrative in favour of a recursive one, which adds depth and suspense to the story. He did not learn English until he was in his early twenties, and he always spoke with a heavy accent, yet he mastered the vocabulary and the rhythms of the language so thoroughly that the landscapes and the cityscapes that he renders, often in exquisite detail, come to life. His ear for dialogue is equally true.

After 1911, Conrad continued his impressive pace as a novelist and short story writer. Critics generally agree that his best work was behind him, although opinion on the merits of some of his later novels, Chance (1914), Victory (1915), and The Shadow Line (1917), is divided.  Conrad certainly remained a popular novelist, whose works sold well, and who, despite heavy expenses and debts that resulted from a sometimes profligate lifestyle, became a wealthy man. Sales were helped by the stories’ exotic settings and spirit of romantic adventure, which appealed to an ever-growing late-Victorian readership.

Conrad was hard at work, lecturing and writing, until his death in August 1924, with his final novel, Suspense, left unfinished.