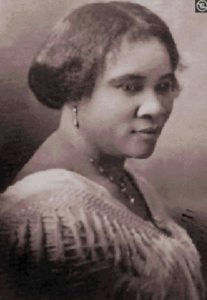 Madam C.J. Walker, the first self-made female millionaire in the USA. In early twentieth-century USA it was not easy for a single woman to support herself and her child. Yet the widowed mother of one who moved to Denver in 1905 at the age of thirty-eight with savings of just $1.50 died fourteen years later one of the twentieth century’s most successful, self-made women entrepreneurs.

Sarah Breedlove was born in 1867 in Louisiana, to former slaves. Orphaned at the age of seven, she worked as a maid from the age of ten. By her fourteenth birthday, Sarah had married and three years later gave birth to her only daughter. In 1887, having been widowed, she moved with her daughter to St. Louis where her brothers lived.  She earned $1.50 a day as a laundress and cook, struggling to send her daughter to school.

By the age of thirty-five life did not look promising. However, things began to improve when she took employment as local agent for a hair-restoring product. At around the same time she met Charles Joseph (C.J.) Walker, a salesman whom she married and whose name she took. At around this time she was inspired by a dream to mix her own hair-restoring recipe, using products from Africa. This was so successful that she branched out on her own, with ‘Madam Walker’s Wonderful Hair Grower’. Her initial investment was $1.25.  She went on to make a fortune out of the shampoos and ointments developed for black hair.

By 1915 Madam C. J. Walker was by far the wealthiest African American woman in the country. She was invited to meetings of black leaders and was to lecture on business and politics. She spoke out on the social conditions endured by African Americans and devoted particular attention and money to the campaign to make lynching a federal crime. 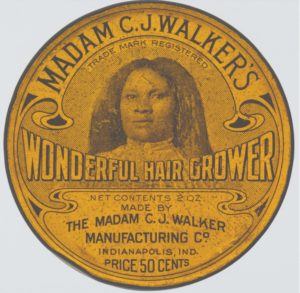