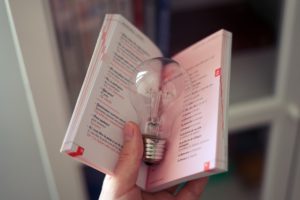 Inference is what you, as a reader, conclude based on reading a text.  Those conclusions are not stated directly in the text; they are thoughts that you develop based on evidence in the text.  Text evidence consists of content, point of view, language, and tone—the elements that an author uses to create meaning in a text.  These elements can be manipulated to imply meaning instead of stating it directly.  The meaning that’s implied and that you create based on your conclusions is what constitutes inference.  Making inferences is a comprehension strategy used by proficient readers to “read between the lines,” make connections, and draw conclusions about the text’s meaning and purpose.

You already make inferences all of the time.  For example, imagine you go over to a friend’s house and they point at the sofa and say, “Don’t sit there, Cindy came over with her baby again.”  What could you logically conclude?  First, you know there must be a reason not to sit where your friend is pointing.  Next, the reason not to sit there is related to the fact that Cindy just visited with her baby.  You don’t know what exactly happened, but you can make an inference and don’t need to ask any more questions to know that you do not want to sit there.

Imagine you witness the following situations at different times. What can you infer about each situation?

You do not know with 100% certainty that these inferences are true.  If you checked 100 strollers, 99 times you might find a baby, but maybe one time you might find something else, such as a pet or bags of groceries. 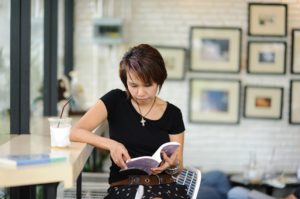 To make inferences from reading, consider the elements of the text, including content, point of view, language, and tone.  Or, you may want to take two or more details from the reading and see if you can draw a conclusion.  Remember, making an inference is not just making a wild guess.  You need to make a judgment that can be supported, just as you could reasonably infer there is a baby in a stroller, but not reasonably infer that there are groceries, even though both would technically be a “guess”.

Hybrid cars are good for the environment, but they may not perform as well as cars that run only on gasoline. The Toyota Prius gets great gas mileage and has low emissions making it a good “green” option. However, many people think that it is unattractive. The Prius also cannot accelerate as quickly as other models, and cannot hold as many passengers as larger gas-fueled SUVs and vans. Compared to similar gas-fueled options, hybrid cars also cost more money up front. A new hybrid car costs almost $3,500 more than the same car configured to run just on gasoline.

Based on the paragraph, which of the following is the most accurate, logical inference?

There’s nothing about car safety in the paragraph at all, so you can eliminate the first choice immediately.

The second choice is implied: if the car cost $3,500 more than other cars, then Toyota would be making a lot of money by selling the car.  But is it the most reasonable conclusion?

You may think that the third choice is true.  After all, people want to make hybrid cars because they believe that emissions are contributing to environmental damage, but this is not mentioned in the paragraph.  Even if you think it is true, the answer has to be supported by the text to be the correct answer to the problem.

The fourth choice can be inferred from the text.  If a person had a large family, was short on money, or needed a car that could accelerate quickly, then a hybrid might not be the best choice for them.

So there are two possible choices, 2 and 4.  When you compare the, though, you may conclude that choice 2 is not as accurate an implication because you don’t know how much it costs Toyota to make the cars, and you don’t know how many they sell, so you can’t reasonably infer that they are making a lot of money.  Choice 4 therefore is the most accurate and logical inference.

The ability to make accurate, logical inferences based on evidence is a key critical thinking and reading skill.  Inferences that are incorrect account for a number of logical errors or fallacies, which are often the result of inferences not appropriately based on evidence.

View the following video to review the concept of inference, which is applied to reading fiction, reading non-fiction, and reading real-life situations.

Based on the article “Forget Shorter Showers” by Derrick Jensen, which of the statements below is the most accurate, logical inference?

Statement 2 could be inferred from the article, but the word “all” is not supported in the text.  Jensen states that the group of people who live simply as a political action (not “all” people who live simply, such as those who choose a simple lifestyle) are unrealistic in thinking that their political statement will have an effect on resource use.

Statement 3 could be inferred, although it’s not entirely accurate or logical to assume that big manufacturers and conglomerates consciously play on human’s guilt.  Jensen does not specifically assign the origin of the guilt.  Also, it may not be accurate to assume that all human guilt is “inherent,” an essential characteristic of the human condition.