Quotations, paraphrases, and summaries all need to be attributed, or identified as “belonging” to their original authors.  Attribution is both an ethical practice and a legal necessity, to avoid “stealing” another person’s specific ideas.  Keep one basic rule about using sources in mind: your reader needs to be able to distinguish, at all times, which information is yours and which information comes from sources.

One standard method of attributing and introducing paraphrases and summaries is to use a phrase such as “according to,” or “Smith states that.” However, relying on “states” or “says” is not always your best choice as a writer. Here’s a list of 15 useful alternatives.

More precise choices such as these carry a lot more information than “says,” enabling you to relate more information with fewer words. For one thing, they can quickly convey what kind of idea you’re citing: a speculative one (“proposes”), a conclusive one (“determines”), a controversial one (“counters”). You can further show how you’re incorporating these sources into your own narrative through your word choice. For example, if you write that an author “claims” something, you’re presenting yourself as fairly neutral about that claim. If you instead write that the author “concludes” something, then you signal to your reader that you find that evidence more convincing. “Suggests” on the other hand is a much weaker endorsement.

Practice attributing and using sources with the brief exercise below, which includes quotations, paraphrases, summaries, and attributions.  The exercise is based on a short passage from a world history textbook. 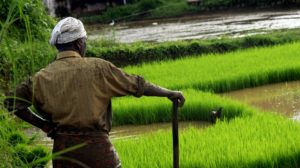 Like so many things desired by Europeans and supplied by Asians—at first luxury items for the elite such as silk or porcelain, but increasingly products like tea from China for the mass market—cotton textiles were produced well and cheaply in India. The British textile manufacturers focused on the “cheap” part and complained that with relatively higher wages, British manufacturers could not compete. India had a competitive advantage in the eighteenth century, being able to undersell in the world market virtually any other producer of textiles. Some thought the reason for cheap Indian textiles was because of a low living standard, or a large population earning depressed wages, but all of those have been shown to not be true: Indian textile workers in the eighteenth century had just as high a standard of living as British workers. So, if it was not a low standard of living that gave India its competitive advance, what did?

In a word: agriculture. Indian agriculture was so productive that the amount of food produced, and hence its cost, was significantly lower than in Europe. In the preindustrial age, when working families spent 60-80 percent of their earnings on food, the cost of food was the primary determinant of their real wages (i.e. how much a pound, dollar, a real, or a pagoda could buy). In India (and China and Japan as well), the amount of grain harvested from a given amount of seed was in the ration of 20:1 (e.g., twenty bushels of rice harvested for every one planted), whereas in England it was at best 8:1. Asian agriculture thus was more than twice as efficient as British (and by extension European) agriculture, and food—the major component in the cost of living—cost less in Asia.

1Robert B. Marks, The Origins of the Modern World: A Global and Ecological Narrative from the Fifteenth to the Twenty-first Century (Lanham, MD: Rowman & Littlefield, 2007), 95.

Drawing on this passage, try out different quoting, paraphrasing and summarizing options for a research essay on the economics of food supply:

Show a possible answer
“India (and China and Japan as well), the amount of grain harvested from a given amount of seed was in the ration of 20:1 (e.g., twenty bushels of rice harvested for every one planted), whereas in England it was at best 8:1” (Marks 95).

This sentence contains a significant statistic, is clearly-written, and would be appropriate in an essay focusing on the economics of food supply. It also contains correct attribution, with the author’s last name and exact page number in parentheses at the end, using MLA in-text citation format.

Show a possible answer
Indian agriculture was so fruitful that the amount of food farmed, and therefore its cost, was a lot lower than in Europe. When working families spent 60-80 percent of their wages on food in the preindustrial age, the cost of food was the primary determinant of their real wages (i.e. how much a pound, dollar, a real, or a pagoda could buy).

This unacceptable paraphrase simply changed a few words and retained the original text’s sentence structure. There’s no attribution of the paraphrase’s source.

Show a possible answer
Marks states that the percentage of income devoted to purchasing food in Indian families from the mid-eighteenth to mid-nineteenth century was very low compared to countries in Europe. Residents of India thus had more spending power, as comparatively so little of their wages needed to be devoted to the purchase of food (95).

This acceptable paraphrase changed sentence structures as well as wording. It also uses an attribution at the start and a citation at the end, so your reader can distinguish it from other sources of information as well as your own information in an essay.

By using the word “confirms” instead of “states,” there’s an implication that other researchers have agreed with this information, thus making the information seem more authoritative, as it no longer is confined to just the insight of one expert.

Show a possible answer
Marks confirms that in the 18th century, India sold fabric at far cheaper cost than other countries due to lower salary costs, which were not the result of a low standard of living, but were the result of an abundance of cheap food, which was grown at a far higher yield than in Europe (95).

This summary greatly condenses the two original paragraphs into one sentence, retaining the key concepts. It uses original language and sentence structure, and it is attributed correctly at the beginning and end.