What exactly is parallel structure? It’s simply the practice of using the same format for similar items. Parallel structure can be applied to a single sentence, a paragraph, or even multiple paragraphs. Compare the two following sentences:

Was the second sentence a smoother read than the first? The second sentence uses parallelism—all three verbs are in the same -ing form—whereas in the first sentence two use -ing form and one does not. Parallelism improves writing style and readability, and it makes sentences easier to read and understand. Parallelism is like running in the same direction.  It would be disruptive to see a runner running the wrong way in a race. 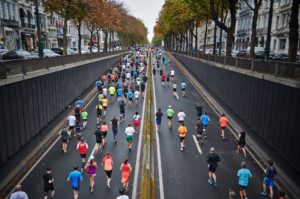 Lacking parallelism: “She likes cooking, jogging, and to read.”

Lacking parallelism: “The dog ran across the yard and jumped over the fence, and down the alley he sprinted.”

For additional examples and explanations of parallelism, view the following video.

Look at the following items. Identify and address any issues with parallelism.

When used this way, parallelism makes your writing or speaking much stronger. These repeated phrases seem to bind the work together and make it more powerful—and more inspiring. This use of parallelism can be especially useful in writing conclusions of academic papers or in persuasive writing.