We experience different states of consciousness and different levels of awareness on a regular basis. We might even describe consciousness as a continuum that ranges from full awareness to a deep sleep. Sleep is a state marked by relatively low levels of physical activity and reduced sensory awareness that is distinct from periods of rest that occur during wakefulness. Wakefulness is characterized by high levels of sensory awareness, thought, and behavior. In between these extremes are states of consciousness related to daydreaming, intoxication as a result of alcohol or other drug use, meditative states, hypnotic states, and altered states of consciousness following sleep deprivation. We might also experience unconscious states of being via drug-induced anesthesia for medical purposes. Often, we are not completely aware of our surroundings, even when we are fully awake. For instance, have you ever daydreamed while driving home from work or school without really thinking about the drive itself? You were capable of engaging in the all of the complex tasks involved with operating a motor vehicle even though you were not aware of doing so. Many of these processes, like much of psychological behavior, are rooted in our biology. 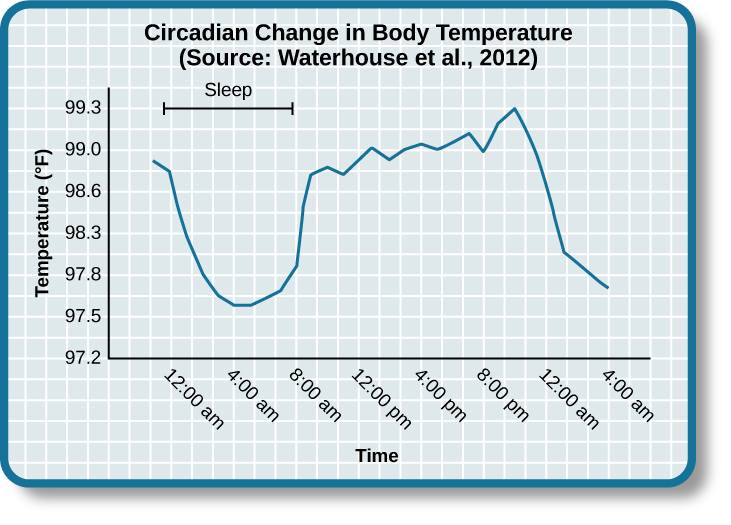 This chart illustrates the circadian change in body temperature over 28 hours in a group of eight young men. Body temperature rises throughout the waking day, peaking in the afternoon, and falls during sleep with the lowest point occurring during the very early morning hours.

If we have biological rhythms, then is there some sort of biological clock? In the brain, the hypothalamus, which lies above the pituitary gland, is a main center of homeostasis. Homeostasis is the tendency to maintain a balance, or optimal level, within a biological system.

The brain’s clock mechanism is located in an area of the hypothalamus known as the suprachiasmatic nucleus (SCN). The axons of light-sensitive neurons in the retina provide information to the SCN based on the amount of light present, allowing this internal clock to be synchronized with the outside world (Klein, Moore, & Reppert, 1991; Welsh, Takahashi, & Kay, 2010) ([link]).

Generally, and for most people, our circadian cycles are aligned with the outside world. For example, most people sleep during the night and are awake during the day. One important regulator of sleep-wake cycles is the hormone melatonin. The pineal gland, an endocrine structure located inside the brain that releases melatonin, is thought to be involved in the regulation of various biological rhythms and of the immune system during sleep (Hardeland, Pandi-Perumal, & Cardinali, 2006). Melatonin release is stimulated by darkness and inhibited by light.

There are individual differences with regards to our sleep-wake cycle. For instance, some people would say they are morning people, while others would consider themselves to be night owls. These individual differences in circadian patterns of activity are known as a person’s chronotype, and research demonstrates that morning larks and night owls differ with regard to sleep regulation (Taillard, Philip, Coste, Sagaspe, & Bioulac, 2003). Sleep regulation refers to the brain’s control of switching between sleep and wakefulness as well as coordinating this cycle with the outside world.

Watch this brief video describing circadian rhythms and how they affect sleep.

Whether lark, owl, or somewhere in between, there are situations in which a person’s circadian clock gets out of synchrony with the external environment. One way that this happens involves traveling across multiple time zones. When we do this, we often experience jet lag. Jet lag is a collection of symptoms that results from the mismatch between our internal circadian cycles and our environment. These symptoms include fatigue, sluggishness, irritability, and insomnia (i.e., a consistent difficulty in falling or staying asleep for at least three nights a week over a month’s time) (Roth, 2007).

Individuals who do rotating shift work are also likely to experience disruptions in circadian cycles. Rotating shift work refers to a work schedule that changes from early to late on a daily or weekly basis. For example, a person may work from 7:00 a.m. to 3:00 p.m. on Monday, 3:00 a.m. to 11:00 a.m. on Tuesday, and 11:00 a.m. to 7:00 p.m. on Wednesday. In such instances, the individual’s schedule changes so frequently that it becomes difficult for a normal circadian rhythm to be maintained. This often results in sleeping problems, and it can lead to signs of depression and anxiety. These kinds of schedules are common for individuals working in health care professions and service industries, and they are associated with persistent feelings of exhaustion and agitation that can make someone more prone to making mistakes on the job (Gold et al., 1992; Presser, 1995).

Rotating shift work has pervasive effects on the lives and experiences of individuals engaged in that kind of work, which is clearly illustrated in stories reported in a qualitative study that researched the experiences of middle-aged nurses who worked rotating shifts (West, Boughton & Byrnes, 2009). Several of the nurses interviewed commented that their work schedules affected their relationships with their family. One of the nurses said,

If you’ve had a partner who does work regular job 9 to 5 office hours . . . the ability to spend time, good time with them when you’re not feeling absolutely exhausted . . . that would be one of the problems that I’ve encountered. (West et al., 2009, p. 114)

While disruptions in circadian rhythms can have negative consequences, there are things we can do to help us realign our biological clocks with the external environment. Some of these approaches, such as using a bright light as shown in [link], have been shown to alleviate some of the problems experienced by individuals suffering from jet lag or from the consequences of rotating shift work. Because the biological clock is driven by light, exposure to bright light during working shifts and dark exposure when not working can help combat insomnia and symptoms of anxiety and depression (Huang, Tsai, Chen, & Hsu, 2013).

Watch this video to hear tips on how to overcome jet lag.

When people have difficulty getting sleep due to their work or the demands of day-to-day life, they accumulate a sleep debt. A person with a sleep debt does not get sufficient sleep on a chronic basis. The consequences of sleep debt include decreased levels of alertness and mental efficiency. Interestingly, since the advent of electric light, the amount of sleep that people get has declined. While we certainly welcome the convenience of having the darkness lit up, we also suffer the consequences of reduced amounts of sleep because we are more active during the nighttime hours than our ancestors were. As a result, many of us sleep less than 7–8 hours a night and accrue a sleep debt. While there is tremendous variation in any given individual’s sleep needs, the National Sleep Foundation (n.d.) cites research to estimate that newborns require the most sleep (between 12 and 18 hours a night) and that this amount declines to just 7–9 hours by the time we are adults.

If you lie down to take a nap and fall asleep very easily, chances are you may have sleep debt. Given that college students are notorious for suffering from significant sleep debt (Hicks, Fernandez, & Pelligrini, 2001; Hicks, Johnson, & Pelligrini, 1992; Miller, Shattuck, & Matsangas, 2010), chances are you and your classmates deal with sleep debt-related issues on a regular basis. [link] shows recommended amounts of sleep at different ages.

To assess your own sleeping habits, read this article about sleep needs.

The amount of sleep we get varies across the lifespan. When we are very young, we spend up to 16 hours a day sleeping. As we grow older, we sleep less. In fact, a meta-analysis, which is a study that combines the results of many related studies, conducted within the last decade indicates that by the time we are 65 years old, we average fewer than 7 hours of sleep per day (Ohayon, Carskadon, Guilleminault, & Vitiello, 2004). As the amount of time we sleep varies over our lifespan, presumably the sleep debt would adjust accordingly.

States of consciousness vary over the course of the day and throughout our lives. Important factors in these changes are the biological rhythms, and, more specifically, the circadian rhythms generated by the suprachiasmatic nucleus (SCN). Typically, our biological clocks are aligned with our external environment, and light tends to be an important cue in setting this clock. When people travel across multiple time zones or work rotating shifts, they can experience disruptions of their circadian cycles that can lead to insomnia, sleepiness, and decreased alertness. Bright light therapy has shown to be promising in dealing with circadian disruptions. If people go extended periods of time without sleep, they will accrue a sleep debt and potentially experience a number of adverse psychological and physiological consequences.

1. Healthcare professionals often work rotating shifts. Why is this problematic? What can be done to deal with potential problems?

2. Generally, humans are considered diurnal which means we are awake during the day and asleep during the night. Many rodents, on the other hand, are nocturnal. Why do you think different animals have such different sleep-wake cycles?

3. We experience shifts in our circadian clocks in the fall and spring of each year with time changes associated with daylight saving time. Is springing ahead or falling back easier for you to adjust to, and why do you think that is?

4. What do you do to adjust to the differences in your daily schedule throughout the week? Are you running a sleep debt when daylight saving time begins or ends?

1. Given that rotating shift work can lead to exhaustion and decreased mental efficiency, individuals working under these conditions are more likely to make mistakes on the job. The implications for this in the health care professions are obvious. Those in health care professions could be educated about the benefits of light-dark exposure to help alleviate such problems.

2. Different species have different evolutionary histories, and they have adapted to their environments in different ways. There are a number of different possible explanations as to why a given species is diurnal or nocturnal. Perhaps humans would be most vulnerable to threats during the evening hours when light levels are low. Therefore, it might make sense to be in shelter during this time. Rodents, on the other hand, are faced with a number of predatory threats, so perhaps being active at night minimizes the risk from predators such as birds that use their visual senses to locate prey.

biological rhythm  internal cycle of biological activity
circadian rhythm  biological rhythm that occurs over approximately 24 hours
consciousness  awareness of internal and external stimuli
homeostasis  tendency to maintain a balance, or optimal level, within a biological system
insomnia  consistent difficulty in falling or staying asleep for at least three nights a week over a month’s time
jet lag  collection of symptoms brought on by travel from one time zone to another that results from the mismatch between our internal circadian cycles and our environment
melatonin  hormone secreted by the endocrine gland that serves as an important regulator of the sleep-wake cycle
meta-analysis  study that combines the results of several related studies
pineal gland  endocrine structure located inside the brain that releases melatonin
rotating shift work  work schedule that changes from early to late on a daily or weekly basis
sleep  state marked by relatively low levels of physical activity and reduced sensory awareness that is distinct from periods of rest that occur during wakefulness
sleep debt  result of insufficient sleep on a chronic basis

brain’s control of switching between sleep and wakefulness as well as coordinating this cycle with the outside world
suprachiasmatic nucleus (SCN)  area of the hypothalamus in which the body’s biological clock is located
wakefulness  characterized by high levels of sensory awareness, thought, and behavior
Licenses and Attributions
CC licensed content, Shared previously