Ch. 12 The Rise of Nation-States

Members of the highest rank of the feudal Bulgarian, Moscovian, Ruthenian (Ukraine and Belarus), Wallachian, and Moldavian aristocracies, second only to the ruling princes (or tsars), from the 10th century to the 17th century.

A formal list of positions and ranks in the military, government, and court of Imperial Russia. Peter the Great introduced the system in 1722 while engaged in a struggle with the existing hereditary nobility, or boyars. It was formally abolished in 1917 by the newly established Bolshevik government.

Government departments in Imperial Russia established in 1717 by Peter the Great. The departments were housed in Saint Petersburg.

Russia’s second-largest city after Moscow and an important Russian port on the Baltic Sea. Established by Peter the Great, between 1713–1728 and 1732–1918 it was the imperial capital of Russia. It remains the most westernized city of Russia as well as its cultural capital.

A congregation of Orthodox church leaders in Russia. It was established by Peter the Great, Stefan Yavorsky, and Feofan Prokopovich in January 1721 to replace the Patriarchate of Moscow. It was abolished following the February Revolution of 1917 and replaced with a restored patriarchate under Tikhon of Moscow.

Peter’s Reforms of the Russia State

Unlike most of his predecessors, not only did Peter the Great recognize the weaknesses of the Russian state, which at the time was greatly influenced by the class of boyars (feudal elites), but also aspired to reform it following Western European models. Seeing boyars as obstacles standing in the way of Europeanization and reform, Peter introduced changes into a relatively antiquated system of Russian administration. In 1708, he established eight governorates and in 1711 the Governing Senate. All its members, originally ten individuals, were appointed by the tsar. The senate did not interrupt the activity and was the permanent operating state body. In 1713, Landrats (from the German word for “national council”) were created in each of the governorates. They were staffed by professional civil servants, who assisted a royally-appointed governor. In 1719, after the establishment of government departments known as the Collegia, Peter remade Russia’s administrative divisions once more. The new provinces were modeled on the Swedish system, in which larger, more politically important areas received more political autonomy, while smaller, more rural areas were controlled more directly by the state.

Peter’s distrust of the elitist and anti-reformist boyars culminated in 1722 with the creation of the Table of Ranks, a formal list of ranks in the Russian military, government, and royal court. The Table of Ranks established a complex system of titles and honorifics, each classed with a number denoting a specific level of service or loyalty to the tsar. Previously, high-ranking state positions were hereditary, but with the establishment of the Table of Ranks, anyone, including a commoner, could work their way up the bureaucratic hierarchy with sufficient hard work and skill. While all these administrative reforms aimed to weaken the position of the old boyar class, they also moved Russia towards authoritarian rule, where power was largely concentrated in the hand of the head of the state.

The Russian tsars traditionally exerted some influence on church operations. However, until Peter’s reforms, the church had been relatively free in its internal governance. Peter lost the support of the Russian clergy over his modernizing reforms as local hierarchs became very suspicious of his friendship with foreigners and his alleged Protestant propensities. The tsar did not abandon Orthodoxy as the main ideological core of the state, but attempted to start a process of westernization of the clergy, relying on those with a Western theological education. Simultaneously, Peter remained faithful to the canons of the Eastern Orthodox church. Inviting Ukrainian and Belorussian clergymen, mostly graduates of the highly acclaimed westernized Kiev-Mohyla Academy, unintentionally led to the “Ukrainization” of the Russian church, and by the middle of the 18th century the majority of the Russian Orthodox church was headed by people from Ukraine.

The traditional leader of the church was the Patriarch of Moscow. In 1700, when the office fell vacant, Peter refused to name a replacement and created the position of the custodian of the patriarchal throne, which he controlled by appointing his own candidates. He could not tolerate the thought that a patriarch could have power superior to the tsar, as indeed had happened in the case of Philaret (1619–1633) and Nikon (1652–1666). In 1721, he established the Holy Synod (originally the Ecclesiastical College), which replaced patriarchy altogether. It was administered by a lay director, or Ober-Procurator. The Synod changed in composition over time, but basically it remained a committee of churchmen headed by a lay appointee of the emperor. Furthermore, a new ecclesiastic educational system was begun under Peter. It aimed to improve the usually very poor education of local priests and monks. However, the curriculum was so westernized (emphasis on Latin language and subjects for the price of limited exposure to Greek, the Eastern Church Fathers, and Russian and Slavonic church languages) that monks and priests, while being formally educated, received poor training in preparation for a ministry to a Russian-speaking population steeped in the traditions of Eastern Orthodoxy.

In 1703, during the Great Northern War, Peter the Great established the Peter and Paul fortress on small Hare Island, by the north bank of the Neva River. The fortress was the first brick and stone building of the new projected capital city of Russia and the original citadel of what would eventually be Saint Petersburg. The city was built by conscripted peasants from all over Russia, and tens of thousands of serfs died building it. Peter moved the capital from Moscow to Saint Petersburg in 1712, but referred to Saint Petersburg as the capital (or seat of government) as early as 1704. Western European architects, most notably Swiss Italian Domenico Trezzini and French Jean-Baptiste Alexandre Le Blond, shaped the city in the initial stages of its construction. Such buildings as the Menshikov Palace, Kunstkamera, Peter and Paul Cathedral, and Twelve Collegia became prominent architectural landmarks. In 1724, Peter also established the Academy of Sciences, the University, and the Academic Gymnasium. Saint Petersburg is still the most Westernized city in and the cultural capital of Russia. 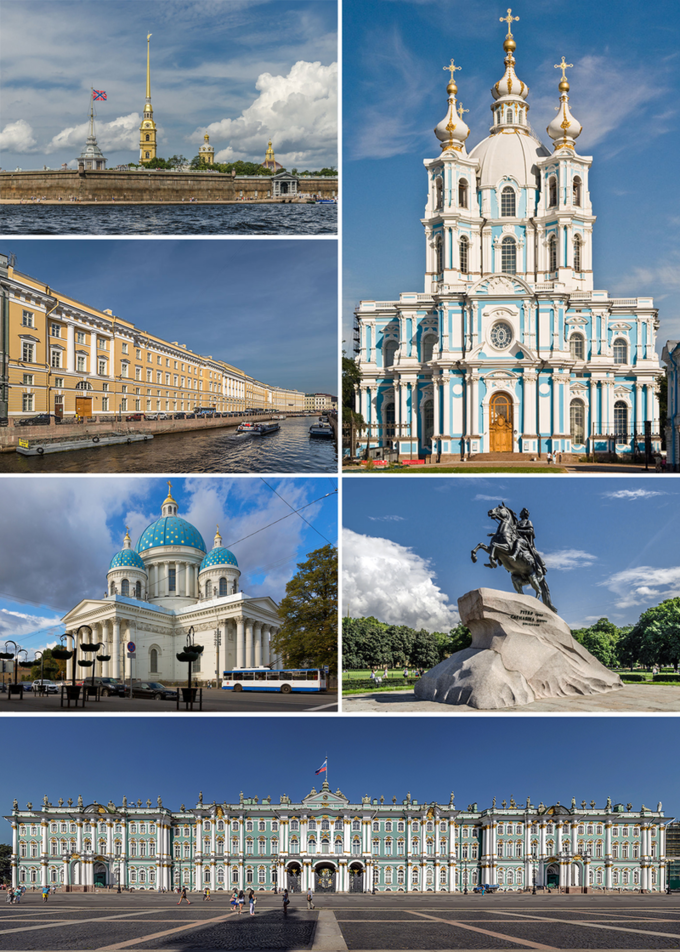 Peter had two wives, with whom he had fourteen children, but only three survived to adulthood. Upon his return from his European tour in 1698, he sought to end his unhappy arranged marriage to Eudoxia Lopukhina. He divorced the tsaritsa and forced her into joining a convent. Only one child from the marriage, Tsarevich Alexei, survived past his childhood. In 1712, Peter formally married his long-time mistress, Martha Skavronskaya, who upon her conversion to the Russian Orthodox church took the name Catherine.

Peter suspected his eldest child and heir, Alexei, of being involved in a plot to overthrow the emperor. Alexei was tried and confessed under torture during questioning conducted by a secular court. He was convicted and sentenced to be executed. The sentence could be carried out only with Peter’s signed authorization, but Alexei died in prison, as Peter hesitated before making the decision. In 1724, Peter had his second wife, Catherine, crowned as empress, although he remained Russia’s actual ruler. He died a year later without naming a successor. As Catherine represented the interests of the “new men,” commoners who had been brought to positions of great power by Peter based on competence, a successful coup was arranged by her supporters in order to prevent the old elites from controlling the laws of succession.
Catherine was the first woman to rule Imperial Russia (as empress), opening the legal path for a century almost entirely dominated by women, including her daughter Elizabeth and granddaughter-in-law Catherine the Great, all of whom continued Peter the Great’s policies in modernizing Russia.