All the land, not necessarily all physically connected to the manor house, that was retained by the lord of a manor for his own use and support, under his own management.

Peasants under feudalism, specifically relating to manorialism. It was a condition of bondage that developed primarily during the High Middle Ages in Europe.

The most common type of serf in the Middle Ages. They had more rights and a higher status than the lowest serf, but existed under a number of legal restrictions that differentiated them from freemen.

Men who were not serfs in the feudal system.

Manorialism was an essential element of feudal society and was the organizing principle of rural economy that originated in the villa system of the Late Roman Empire. Manorialism was widely practiced in medieval Western Europe and parts of central Europe, and was slowly replaced by the advent of a money-based market economy and new forms of agrarian contract.

Manorialism was characterized by the vesting of legal and economic power in the lord of a manor. The lord was supported economically from his own direct landholding in a manor (sometimes called a fief), and from the obligatory contributions of the peasant population who fell under the jurisdiction of the lord and his court. These obligations could be payable in several ways: in labor, in kind, or, on rare occasions, in coin. Manorial structures could be found throughout medieval Western and Eastern Europe: in Italy, Poland, Lithuania, Baltic nations, Holland, Prussia, England, France, and the Germanic kingdoms.

The main reason for the development of the system was perhaps also its greatest strength: the stabilization of society during the destruction of Roman imperial order. With a declining birthrate and population, labor was the key factor of production. Successive administrations tried to stabilize the imperial economy by freezing the social structure into place: sons were to succeed their fathers in their trade, councilors were forbidden to resign, and coloni, the cultivators of land, were not to move from the land they were attached to. The workers of the land were on their way to becoming serfs. As the Germanic kingdoms succeeded Roman authority in the West in the 5th century, Roman landlords were often simply replaced by Gothic or Germanic ones, with little change to the underlying situation or displacement of populations. Thus the system of manorialism became ingrained into medieval societies.

Manors each consisted of three classes of land:

Additional sources of income for the lord included charges for use of his mill, bakery, or wine-press, or for the right to hunt or to let pigs feed in his woodland, as well as court revenues and single payments on each change of tenant. On the other side of the account, manorial administration involved significant expenses, perhaps a reason why smaller manors tended to rely less on villein tenure.

Serfdom was the status of peasants under feudalism, specifically relating to manorialism. It was a condition of bondage that developed primarily during the Middle Ages in Europe.

Serfs who occupied a plot of land were required to work for the lord of the manor who owned that land, and in return were entitled to protection, justice, and the right to exploit certain fields within the manor to maintain their own subsistence. Serfs were often required to work on not only the lord’s fields, but also his mines, forests, and roads. The manor formed the basic unit of feudal society, and the lord of a manor and his serfs were bound legally, economically, and socially. Serfs formed the lowest class of feudal society.

Many of the negative components of manorialism, and feudalism in general, revolve around the bondage of the serf, his lack of social mobility, and his low position on the social hierarchy. However, a serf had some freedoms within his constraints. Though the common wisdom is that a serf owned “only his belly”—even his clothes were the property, in law, of his lord—he might still accumulate personal property and wealth, and some serfs became wealthier than their free neighbors, although this happened rarely. A well-to-do serf might even be able to buy his freedom. A serf could grow what crops he saw fit on his lands, although a serf’s taxes often had to be paid in wheat. The surplus crops he would sell at market.

The landlord could not dispossess his serfs without legal cause, was supposed to protect them from the depredations of robbers or other lords, and was expected to support them by charity in times of famine. Many such rights were enforceable by the serf in the manorial court.

A villein (or villain) was the most common type of serf in the Middle Ages. Villeins had more rights and a higher status than the lowest serf, but existed under a number of legal restrictions that differentiated them from freemen. Villeins generally rented small homes with or without land. As part of the contract with the landlord, the lord of the manor, they were expected to spend some of their time working on the lord’s fields. Contrary to popular belief, the requirement was not often greatly onerous, and was often only seasonal, as was the duty to help at harvest-time, for example. The rest of villeins’ time was spent farming their own land for their own profit.

Like other types of serfs, villeins were required to provide other services, possibly in addition to paying rent of money or produce. Villeins were tied to the land and could not move away without their lord’s consent and the acceptance of the lord to whose manor they proposed to migrate to. Villeins were generally able to hold their own property, unlike slaves.

Villeinage was not a purely uni-directional exploitative relationship. In the Middle Ages, land within a lord’s manor provided sustenance and survival, and being a villein guaranteed access to land and kept crops secure from theft by marauding robbers. Landlords, even where legally entitled to do so, rarely evicted villeins, because of the value of their labour. Villeinage was preferable to being a vagabond, a slave, or an un-landed laborer.

In many medieval countries, a villein could gain freedom by escaping from a manor to a city or borough and living there for more than a year, but this action involved the loss of land rights and agricultural livelihood, a prohibitive price unless the landlord was especially tyrannical or conditions in the village were unusually difficult. 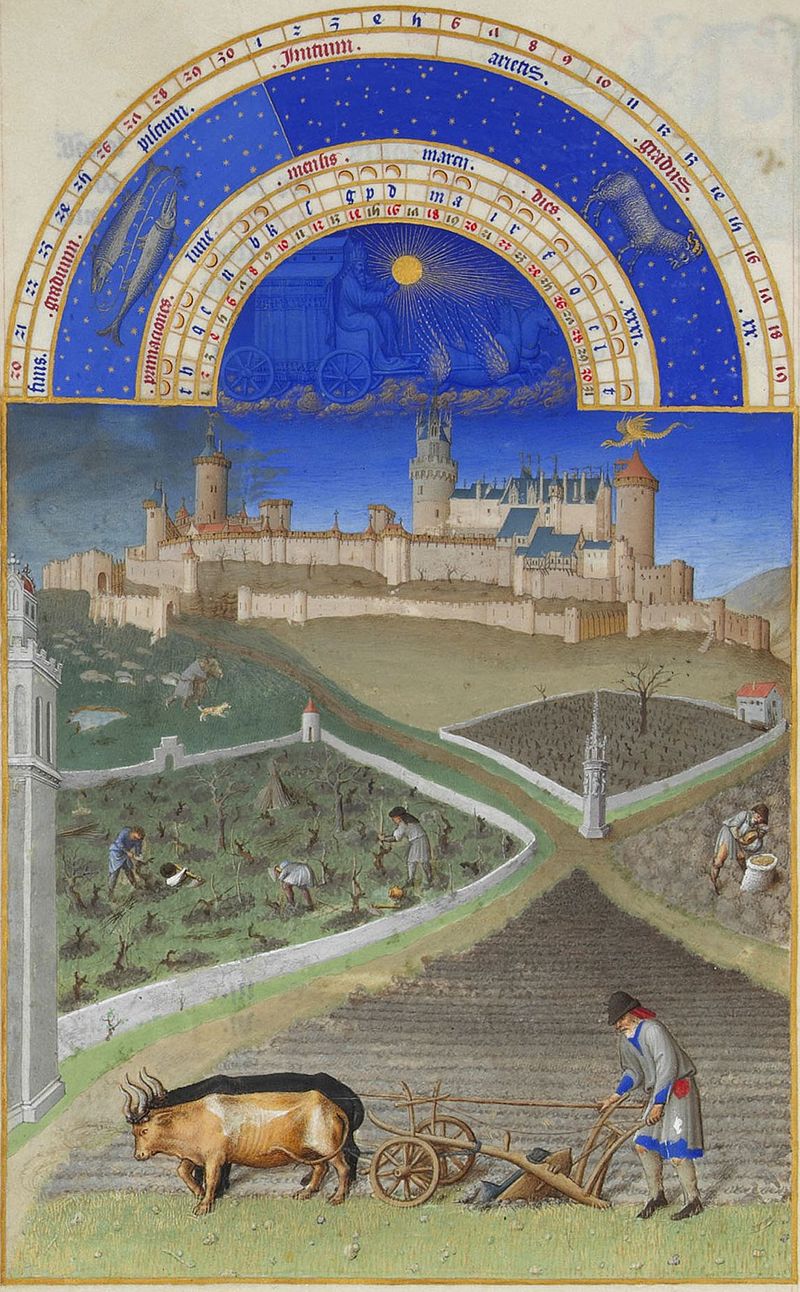 Plowing a French field (French ducal manor in March Les Très Riches Heures du Duc de Berry, c.1410). In the foreground, a farmer plowing a field with a plow pulled by two oxen; man the leader with a long pole. Winemakers prune the vine in a pen and till the soil with a hoe to aerate the soil. On the right, a man leans on a bag, presumably to draw seeds that he will then sow. Finally, in the background, a shepherd takes the dog that keeps his flock. In the background is the castle of Lusignan (Poitou), property of the Duke of Berry. Seen on the right of the picture, above the tower Poitiers, is a winged dragon representing the fairy Melusine.