A ruler of the Carolingian Dynasty renowned for his thirty-year military campaign to spread Christianity in Europe and for his interests in education and religion.

A Viking ship intended for warfare and exploration and designed for speed and agility. Longships were equipped with a sail as well as oars, making navigation independent of the wind possible.

A confederation of medieval West Slavic tribes within the territory of modern northern Germany.

A historical and cultural-linguistic region in northern Europe characterized by a common Germanic heritage and related languages. It includes the three kingdoms of Denmark, Norway, and Sweden.

The capital city of the Roman, Byzantine, Latin, and Ottoman empires. During the 12th century, it was the largest and wealthiest city in Europe.

Vikings were Norse seafarers who originated in Scandinavia and raided, traded, explored, and settled in wide areas of Europe, Asia, and the North Atlantic islands. The period from the earliest recorded raids in the 790s until the Norman conquest of England in 1066 is commonly known as the Viking Age of Scandinavian history. Vikings used the Norwegian Sea and Baltic Sea for sea routes to the south.

There have been several archaeological finds of Viking ships of all sizes, providing knowledge of the craftsmanship that went into building them. There were many types of Viking ships, built according to their intended uses, though the most iconic type is probably the longship. Longships were intended for warfare and exploration, designed for speed and agility, and equipped with oars to complement the sail, making navigation independent of the wind possible. It was the longship that allowed the Norse to “go Viking” (on an expedition), which might explain why this type of ship has become almost synonymous with the concept of Vikings. Longships were the epitome of Scandinavian naval power at the time, and were highly valued possessions.

Ships were an integral part of Viking culture. They facilitated everyday transportation across seas and waterways, exploration of new lands, raids, conquests, and trade with neighboring cultures. They also held a major religious importance; magnates and people with a high status were sometimes buried in a ship along with animal sacrifices, weapons, provisions, and other items.

Our knowledge about the arms and armor of the Viking age is based on archaeological finds, pictorial representation, and to some extent on the accounts in the Norse sagas and Norse laws recorded in the 13th century. According to custom, all free Norse men were required to own weapons and were permitted to carry them all the time. Weapons were indicative of a Viking’s social status; a wealthy Viking would have a complete ensemble of a helmet, shield, mail shirt, and sword. A typical bóndi (freeman) was more likely to fight with a spear and shield, and most also carried a knife and side-arm. Bows were used in the opening stages of land battles and at sea, but they tended to be considered less “honorable” than a weapon that could be used in close combat. Vikings were relatively unusual for the time in their use of axes as a main battle weapon.

The warfare and violence of the Vikings were often motivated and fueled by their belief in Norse religion, focusing on Thor and Odin, the gods of war and death. Apart from two or three representations of (ritual) helmets with protrusions that may be either stylized ravens, snakes, or horns, no depiction of the helmets of Viking warriors, and no preserved helmet, has horns. The stereotypical Viking helmet was thus mainly a fiction of a later romanticized image of the Viking. The formal, close-quarters style of Viking combat (either in shield walls or aboard “ship islands”) would have made horned helmets cumbersome and hazardous to the warrior’s own side.

The Vikings are believed to have engaged in a disordered style of frenetic, furious fighting, although the brutal perception of the Vikings is largely a misconception, likely attributed to Christian misunderstandings regarding paganism at the time.

Facilitated by advanced seafaring skills, Viking activities at times also extended into the Mediterranean littoral, North Africa, the Middle East, and Central Asia. Following extended phases of exploration on seas and rivers, expansion, and settlement, Viking communities and polities were established in diverse areas of northwestern Europe, European Russia, and the North Atlantic islands, and as far as the northeastern coast of North America. During their explorations, Vikings raided and pillaged, but also engaged in trade, settled wide-ranging colonies, and acted as mercenaries. This period of expansion witnessed the wider dissemination of Norse culture while simultaneously introducing strong foreign cultural influences into Scandinavia itself, with profound developmental implications in both directions.

Vikings under Leif Ericsson, the heir to Erik the Red, reached North America and set up a short-lived settlement in present-day L’Anse aux Meadows, Newfoundland and Labrador, Canada. Longer and more-established settlements were formed in Greenland, Iceland, Great Britain, and Normandy.

Viking expansion into continental Europe was limited. Their realm was bordered by powerful cultures to the south. Early on it was the Saxons, who occupied Old Saxony, located in what is now northern Germany. The Saxons were a fierce and powerful people and were often in conflict with the Vikings. To counter the Saxon aggression and solidify their own presence, the Danes constructed the huge defense fortification of Danevirke in and around Hedeby. The Vikings soon witnessed the violent subduing of the Saxons by Charlemagne in the thirty-year Saxon Wars from 772–804. The Saxon defeat resulted in their forced christening and the absorption of Old Saxony into the Carolingian Empire.

Fear of the Franks led the Vikings to further expand Danevirke, and the defense constructions remained in use throughout the Viking Age and even up until 1864. The south coast of the Baltic Sea was ruled by the Obotrites, a federation of Slavic tribes loyal to the Carolingians and later the Frankish empire. The Vikings, led by King Gudfred, destroyed the Obotrite city of Reric on the southern Baltic coast in 808 and transferred the merchants and traders to Hedeby. This secured their supremacy in the Baltic Sea, which endured throughout the Viking Age. 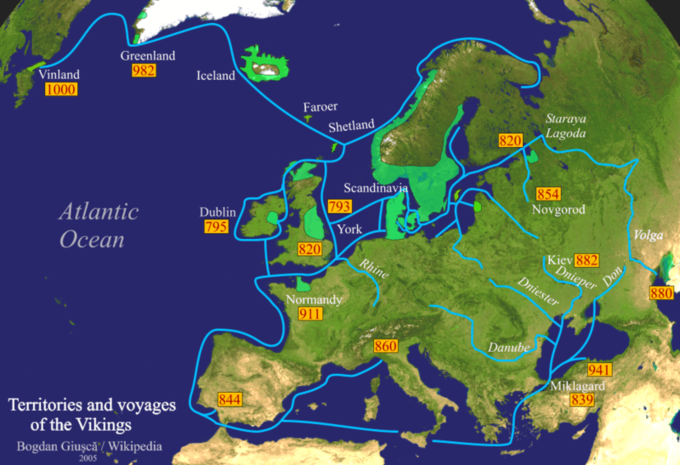 Viking expeditions (blue line)
Light blue: Itineraries of the Vikings, depicting the immense breadth of their voyages through most of Europe, the Mediterranean Sea, Northern Africa, Asia Minor, the Arctic, and North America. Light green: main settlement areas, in the first millennium

The 200-year Viking influence on European history is filled with tales of plunder and colonization, and the majority of these chronicles came from western witnesses and their descendants. Medieval Christians in Europe were totally unprepared for the Viking incursions and could find no explanation for their arrival and the accompanying suffering they experienced at their hands, save the “Wrath of God.” More than any other single event, the attack on Lindisfarne demonized perception of the Vikings for the next twelve centuries. Not until the 1890s did scholars outside Scandinavia begin to seriously reassess the achievements of the Vikings, recognizing their artistry, technological skills, and seamanship.

Studies of genetic diversity have provided scientific confirmation to accompany archaeological evidence of Viking expansion. They additionally indicate patterns of ancestry, imply new migrations, and show the actual flow of individuals between disparate regions. Genetic evidence contradicts the common perception that Vikings were primarily pillagers and raiders. An article by Roger Highfield summarizes recent research and concludes that, as both male and female genetic markers are present, the evidence is indicative of colonization instead of raiding and occupying. However, this is also disputed by unequal ratios of male and female haplotypes, which indicate that more men settled than women, an element of a raiding or occupying population.