Nearly 95% of all earthquakes take place along one of the three types of tectonic plate boundaries, but earthquakes do occur along all three types of plate boundaries. About 80% of all earthquakes strike around the Pacific Ocean basin because it is lined with convergent and transform boundaries. Called the Ring of Fire, this is also the location of most volcanoes around the planet. About 15% take place in the Mediterranean-Asiatic Belt, where convergence is causing the Indian Plate to run into the Eurasian Plate creating the largest mountain ranges in the world. The remaining 5% are scattered around other plate boundaries or are intraplate earthquakes. 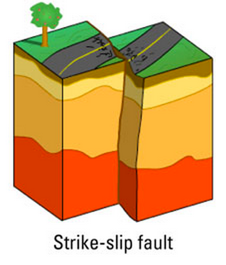 Recall that transform plate boundaries occur where two tectonic plates are grinding parallel to each other rather than colliding or subducting. Deadly earthquakes occur at transform plate boundaries, creating strike-slip faults, because they tend to have shallow focuses where the rupture occurs. The faults along the San Andreas Fault zone produce around 10,000 earthquakes a year. Most are tiny, but occasionally one is massive. In the San Francisco Bay Area, the Hayward Fault was the site of a magnitude 7.0 earthquake in 1868. The 1906 quake on the San Andreas Fault had a magnitude estimated at about 7.9.During the 1989 World Series, a magnitude 7.1 earthquake struck Loma Prieta, near Santa Cruz, California, killing 63 people, injuring 3,756, and cost $6 billion. A few years later in Northridge, California, a magnitude 6.7 earthquake killed 72 people, injured 12,000 people, and caused $12.5 billion in damage. This earthquake occurred on an unknown fault, because it was a blind thrust fault near Los Angeles, California. Although California is prone to many natural hazards, including volcanic eruptions at Mt. Shasta or Mt. Lassen, and landslides on coastal cliffs, the natural hazard the state is linked with is earthquakes. New Zealand also has strike-slip earthquakes, about 20,000 a year, but only a small percentage of those are large enough to be felt. A 6.3 quake in Christchurch in February 2011 killed about 180 people. 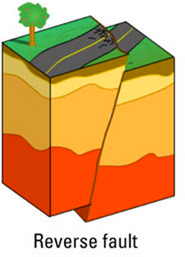 Earthquakes at convergent plate boundaries mark the motions of subducting lithosphere as it plunges through the mantle, creating reverse and thrust faults. Convergent plate boundaries produce earthquakes all around the Pacific Ocean basin. The Philippine Plate and the Pacific Plate subduct beneath Japan, creating a chain of volcanoes and produces as many as 1,500 earthquakes annually.In March 2011 an enormous 9.0 earthquake struck off of Sendai in northeastern Japan. This quake, called the 2011 Tōhoku earthquake, was the most powerful ever to strike Japan and one of the top five known in the world. Damage from the earthquake was nearly overshadowed by the tsunami it generated, which wiped out coastal cities and towns. Two months after the earthquake, about 25,000 people were dead or missing, and 125,000 buildings had been damaged or destroyed. Aftershocks, some as large as major earthquakes, have continued to rock the region. Check out this map of aftershocks. Recently, the New York Times created an interactive website of the Japan earthquake and tsunami.

The Pacific Northwest of the United States is at risk from a potentially massive earthquake that could strike any time. Subduction of the Juan de Fuca plate beneath North America produces active volcanoes, but large earthquakes only hit every 300 to 600 years. The last was in 1700, with an estimated magnitude of around 9.0. You can download this movie on the elastic rebound theory as applied to subduction zones.

Massive earthquakes are the hallmark of the thrust faulting and folding when two continental plates converge. The 2001 Gujarat earthquake in India was responsible for about 20,000 deaths, and many more people became injured or homeless.In Understanding Earthquakes: From Research to Resilience, scientists try to understand the mechanisms that cause earthquakes and tsunamis and the ways that society can deal with them. 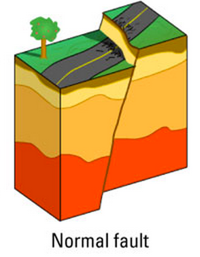 Earthquakes at mid-ocean ridges are small and shallow because the plates are young, thin, and hot. On land where continents split apart, earthquakes are larger and stronger. A classic example of normal faulting along divergent boundaries is the Wasatch Front in Utah and the entire Basin and Range through Nevada. 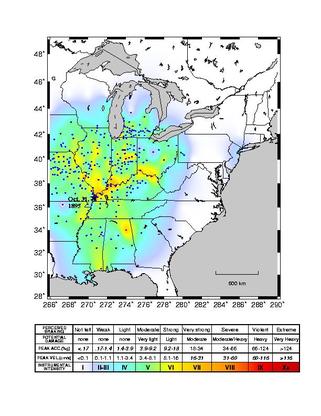 Intraplate earthquakes are the result of stresses caused by plate motions acting in solid slabs of lithosphere. In 1812, a magnitude 7.5 earthquake struck near New Madrid, Missouri. The earthquake was strongly felt over approximately 50,000 square miles and altered the course of the Mississippi River. Because very few people lived there at the time, only 20 people died. Many more people live there today. A similar earthquake today would undoubtedly kill many people and cause a great deal of property damage.