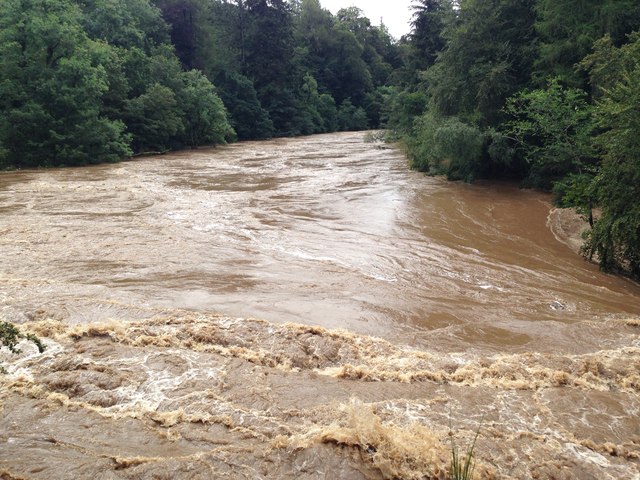 Floods are a natural part of the water cycle, but they can be terrifying forces of destruction. Put most simply, a flood is an overflow of water in one place. Floods can occur for a variety of reasons, and their effects can be minimized in several different ways. Perhaps unsurprisingly, floods tend to affect low-lying areas most severely. Floods usually occur when precipitation falls more quickly than that water can be absorbed into the ground or carried away by rivers or streams. Waters may build up gradually over a period of weeks, when a long period of rainfall or snow-melt fills the ground with water and raises stream levels.

Heavily vegetated lands are less likely to experience flooding. Plants slow down water as it runs over the land, giving it time to enter the ground. Even if the ground is too wet to absorb more water, plants still slow the water’s passage and increase the time between rainfall and the water’s arrival in a stream; this could keep all the water falling over a region to hit the stream at once. Wetlands act as a buffer between land and high water levels and play a key role in minimizing the impacts of floods. Flooding is often more severe in areas that have been recently logged.

When a dam breaks along a reservoir, flooding can be catastrophic. High water levels have also caused small dams to break, wreaking havoc downstream. People try to protect areas that might flood with dams, and dams are usually very effective. People may also line a river bank with levees, high walls that keep the stream within its banks during floods. A levee in one location may just force the high water up or downstream and cause flooding there. The New Madrid Overflow in the image above was created with the recognition that the Mississippi River sometimes simply cannot be contained by levees and must be allowed to flood.Not all the consequences of flooding are negative. Rivers deposit new nutrient-rich sediments when they flood and so floodplains have traditionally been good for farming. Flooding as a source of nutrients was important to Egyptians along the Nile River until the Aswan Dam was built in the 1960s. Although the dam protects crops and settlements from the annual floods, farmers must now use fertilizers to feed their crops.