Glaciers cover about 10 percent of the land surface near Earth’s poles and they are also found in high mountains. During the Ice Ages, glaciers covered as much as 30 percent of Earth. Around 600 to 800 million years ago, geologists think that almost all of the Earth was covered in snow and ice, called the Snowball Theory. Scientists use the evidence of erosion and deposition left by glaciers to do a kind of detective work to figure out where the ice once was and where it came from.

Glaciers are solid ice that move extremely slowly along the land surface. They erode and shape the underlying rocks. Glaciers also deposit sediments in characteristic landforms. The two types of glaciers are: continental and alpine. Continental glaciers are large ice sheets that cover relatively flat ground. These glaciers flow outward from where the greatest amount of snow and ice accumulate. Alpine or valley glaciers flow downhill through mountains along existing valleys. 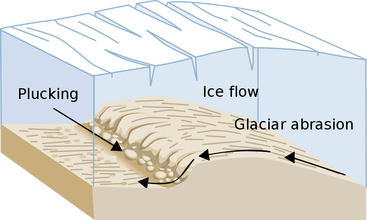 Glaciers erode the underlying rock by abrasion and plucking. Glacial meltwater seeps into cracks of the underlying rock, the water freezes and pushes pieces of rock outward. The rock is then plucked out and carried away by the flowing ice of the moving glacier. With the weight of the ice over them, these rocks can scratch deeply into the underlying bedrock making long, parallel grooves in the bedrock, called glacial striations. Mountain glaciers leave behind unique erosional features. When a glacier cuts through a ‘V’ shaped river valley, the glacier pucks rocks from the sides and bottom. This widens the valley and steepens the walls, making a ‘U’ shaped valley.For example, Utah’s landscape has been greatly influenced by glacial activity of the last ice age. Using Google Maps for our map, first look at Little Cottonwood Canyon and notice how linear the canyon is. That is a direct result of an alpine glacier carving down creating a U-shaped canyon that ultimately ended in Lake Bonneville. Now using the same map, compare Little Cottonwood Canyon with Big Cottonwood Canyon. If you were to drive from the Salt Lake Valley up the canyon, you would notice the canyon to be more V-shaped since because it was carved out by the stream and spring runoff instead of a glacier. The canyon is also more jagged in shape rather than linear like U-shaped canyons. But notice about half way up the canyon, the direction of the canyon changes from the northeast to running southeast. At that pivot point is where the canyon stopped being carved by a river and was carved by another alpine glacier. From that pivot point to the end of the canyon, the canyon because linear and more U-shaped. The cirque, where the glacier originated, is at the head of the canyon is now home to Solitude Sky Resort and a portion of the melted cirque is now called Silver Lake.Smaller tributary glaciers, like tributary streams, flow into the main glacier in their own shallower ‘U’ shaped valleys. A hanging valley forms where the main glacier cuts off a tributary glacier and creates a cliff. Streams plunge over the cliff to create waterfalls. Up high on a mountain, where a glacier originates, rocks are pulled away from valley walls. 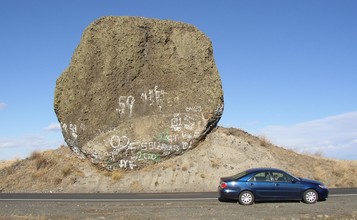 As glaciers flow, mechanical weathering loosens rock on the valley walls, which falls as debris on the glacier. Glaciers can carry rocks of any size, from giant boulders to silt. These rocks can be carried for many miles over many years and decades. These rocks that are different in type or origin from the surrounding bedrock are glacial erratics. Melting glaciers deposit all the big and small bits of rocky material they are carrying in a pile. These unsorted deposits of rock are called glacial till. Glacial till is found in different types of deposits. Linear rock deposits are called moraines and are named by their location relative to the glacier. Geologists study moraines to figure out how far glaciers extended and how long it took them to melt away. 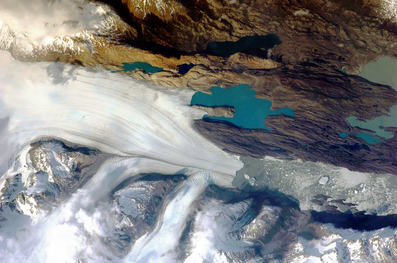 Terminal moraines are long ridges of till left at the furthest point the glacier reached. End moraines are deposited where the glacier stopped for a long enough period to create a rocky ridge as it retreated. Long Island in New York is formed by two end moraines.

While glaciers dump unsorted sediments, glacial melt water can sort and re-transport the sediments. As water moves through unsorted glacial till, it leaves behind the larger particles and takes away the smaller bits of sand and silt.Several types of stratified deposits form in glacial regions but are not formed directly by the ice. Varves form where lakes are covered by ice in the winter. Dark, fine-grained clays sink to the bottom in winter but melting ice in spring brings running water that deposits lighter colored sands. Each alternating dark/light layer represents one year of deposits. If during a year, a glacier accumulates more ice than melts away, the glacier advances downhill. If a glacier melts more than it accumulates over a year, it is retreating.