Introduction to the Universe

This chapter has several goals and objectives: 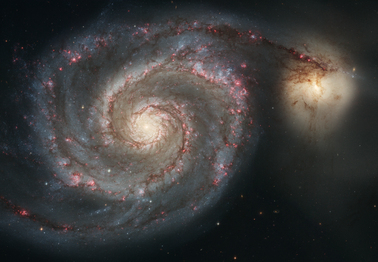 The Whirlpool Galaxy, also known as M51, is a spiral galaxy about 23 million light-years from Earth. Its interactions with the yellowish dwarf galaxy NGC 5195 are of interest to astronomers because the galaxies are near enough to Earth to be well-studied.Decades ago astronomers could not tell if these two galaxies were just passing each other but radio astronomy has supplied astronomers with important data outlining their interactions. Using this data, astronomers have simulated the interaction. NGC 5195 came from behind and then passed through the main disk of M51 about 500 to 600 million years ago. The dwarf galaxy crossed the disk again between 50 and 100 million years ago and is now slightly behind M51. These interactions appear to have intensified the spiral arms that are the dominant characteristic of the Whirlpool Galaxy. Astronomers are able to learn about objects unimaginably far away from Earth using telescopes that sense all wavelengths on the electromagnetic spectrum. Imagine what Galileo would do if he could see the images and data astronomers have available to them now. The study of the universe is called cosmology. Cosmologists study the structure and changes in the present universe. The universe contains all of the star systems, galaxies, gas and dust, plus all the matter and energy that exists now, that existed in the past, and that will exist in the future. The universe includes all of space and time.