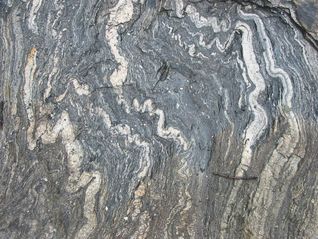 Metamorphism is the addition of heat and/or pressure to existing rocks, which causes them to change physically and/or chemically so that they become a new rock. Metamorphic rocks may change so much that they may not resemble the original rock. Any type of rock—igneous, sedimentary, or metamorphic—can become a metamorphic rock. All that is needed is enough heat and/or pressure to alter the existing rock’s physical or chemical makeup without melting the rock entirely. Rocks change during metamorphism because the minerals need to be stable under the new temperature and pressure conditions. The need for stability may cause the structure of minerals to rearrange and form new minerals. Ions may move between minerals to create minerals of different chemical composition. Hornfels, with its alternating bands of dark and light crystals, is a good example of how minerals rearrange themselves during metamorphism.

Extreme pressure may also lead to foliation, the flat layers that form in rocks as the rocks are squeezed by pressure. Foliation normally forms when pressure is exerted in only one direction. Metamorphic rocks may also be non-foliated. Quartzite and limestone are nonfoliated. The two main types of metamorphism are both related to heat within Earth:

Quartzite is very hard and is often crushed and used in building railroad tracks. Schist and slate are sometimes used as building and landscape materials. Graphite, the “lead” in pencils, is a mineral commonly found in metamorphic rocks.