Volcanologists attempt to forecast volcanic eruptions, but this has proven to be nearly as difficult as predicting an earthquake. Many pieces of evidence can mean that a volcano is about to erupt, but the time and magnitude of the eruption are difficult to pin down. This evidence includes the history of previous volcanic activity, earthquakes, slope deformation, and gas emissions. 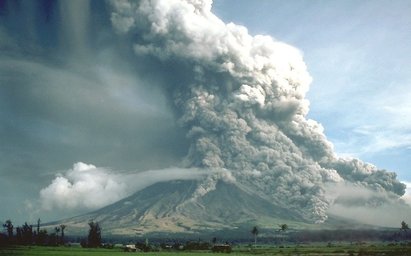 A volcano’s history, how long since its last eruption and the time span between its previous eruptions, is a good first step to predicting eruptions. If the volcano is considered active, it is currently erupting or shows signs of erupting soon. A dormant volcano means there is no current activity, but it has erupted recently. Finally, an extinct volcano means their is no activity and will probably not erupt again. Active and dormant volcanoes are heavily monitored, especially in populated areas.

Moving magma shakes the ground, so the number and size of earthquakes increases before an eruption. A volcano that is about to erupt may produce a sequence of earthquakes. Scientists use seismographs that record the length and strength of each earthquake to try to determine if an eruption is imminent. Magma and gas can push the volcano’s slope upward. Most ground deformation is subtle and can only be detected by tiltmeters, which are instruments that measure the angle of the slope of a volcano. But ground swelling may sometimes create huge changes in the shape of a volcano. Mount St. Helens grew a bulge on its north side before its 1980 eruption. Ground swelling may also increase rockfalls and landslides.

Gases may be able to escape a volcano before magma reaches the surface. Scientists measure gas emissions in vents on or around the volcano. Gases, such as sulfur dioxide (SO2), carbon dioxide (CO2), hydrochloric acid (HCl), and even water vapor (H2O) can be measured at the site or, in some cases, from a distance using satellites. The amounts of gases and their ratios are calculated to help predict eruptions.

Some gases can be monitored using satellite technology. Satellites also monitor temperature readings and deformation. As technology improves, scientists are better able to detect changes in a volcano accurately and safely.Since volcanologists are usually uncertain about an eruption, officials may not know whether to require an evacuation. If people are evacuated and the eruption doesn’t happen, the people will be displeased and less likely to evacuate the next time there is a threat of an eruption. The costs of disrupting business are great. However, scientists continue to work to improve the accuracy of their predictions.