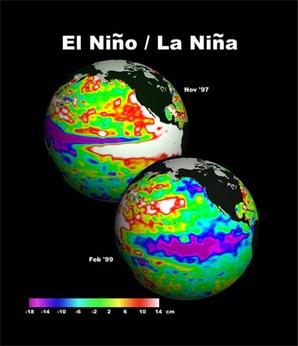 Short-term changes in climate are common. The largest and most important of these is the oscillation between El Niño and La Niña conditions. This cycle is called the ENSO (El Niño southern oscillation). The ENSO drives changes in climate that are felt around the world about every two to seven years.

In a normal year, the trade winds blow across the Pacific Ocean near the equator from east to west (toward Asia). A low pressure cell rises above the western equatorial Pacific. Warm water in the western Pacific Ocean and raises sea levels by one-half meter. Along the western coast of South America, the Peru Current carries cold water northward, and then westward along the equator with the trade winds. Upwelling brings cold, nutrient-rich waters from the deep sea.

In an El Niño year, when water temperature reaches around 28 degrees C (82 degrees F), the trade winds weaken or reverse direction and blow east (toward South America). Warm water is dragged back across the Pacific Ocean and piles up off the west coast of South America. With warm, low-density water at the surface, upwelling stops. Without upwelling, nutrients are scarce and plankton populations decline. Since plankton form the base of the food web, fish cannot find food, and fish numbers decrease as well. All the animals that eat fish, including birds and humans, are affected by the decline in fish.

Other important oscillations are smaller and have a local, rather than global, effect. The North Atlantic Oscillation mostly alters climate in Europe. The Mediterranean also goes through cycles, varying between being dry at some times, and warm and wet at others.