The oceans make up 70 percent of the planet and contains 97 percent of all the water on Earth. It also makes up the vast majority of water stores the majority of the planet’s moisture, terrestrial energy, and heat from the Sun. This energy is transferred between the equator and the two poles by larger surface currents by winds and deep ocean currents driven by differences in ocean density. It also provides the moisture and energy for storm systems and ultimately global climates. Phytoplankton, microscopic plants and animals in the oceans provide the foundation of the global food web of species. The earth’s oceans are so vital for life that over 40 percent of the world’s population live near coastal areas. 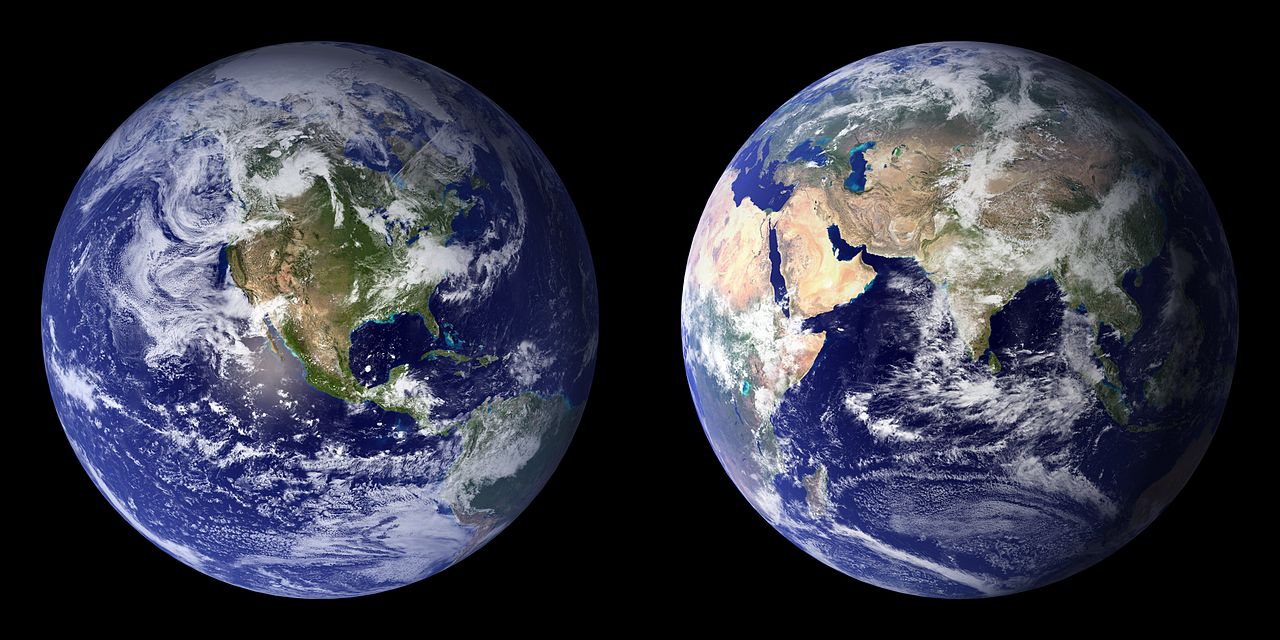 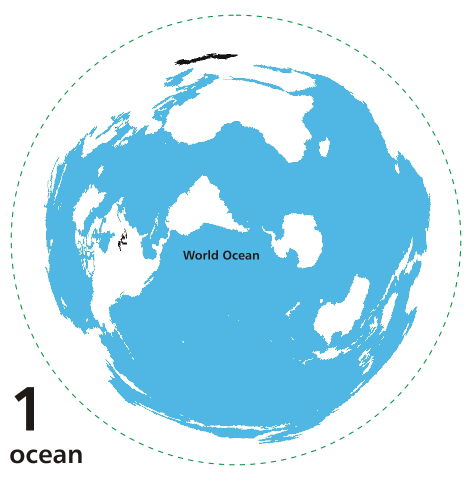 70 percent of the planet is water.

As terrestrial creatures, humans think of the importance of the planet’s land surfaces, yet Earth is a planet consisting of 70 percent water. From space, the dominance of water is obvious because most of it is stored in Earth’s oceans.Earth would not be the same planet without its oceans. The oceans, along with the atmosphere, keep Earth’s surface temperatures fairly constant worldwide. Some places on Earth reach as cold as −7 degrees Celsius, whereas other places reach as hot as 55 degrees Celsius. Yet on other planets like Mercury, temperatures range from −180 degrees Celsius to 430 degrees Celsius.The oceans, along with the atmosphere, distribute heat around the planet. The oceans absorb heat near the equator and then transport that solar energy to polar regions. The oceans also moderate climate within a region. At the same latitude, the temperature range is smaller along coastal areas compared to areas farther inland. Along coastal areas, summer temperatures are not as hot, and winter temperatures are not as cold, because water takes a long time to heat up or cool down. 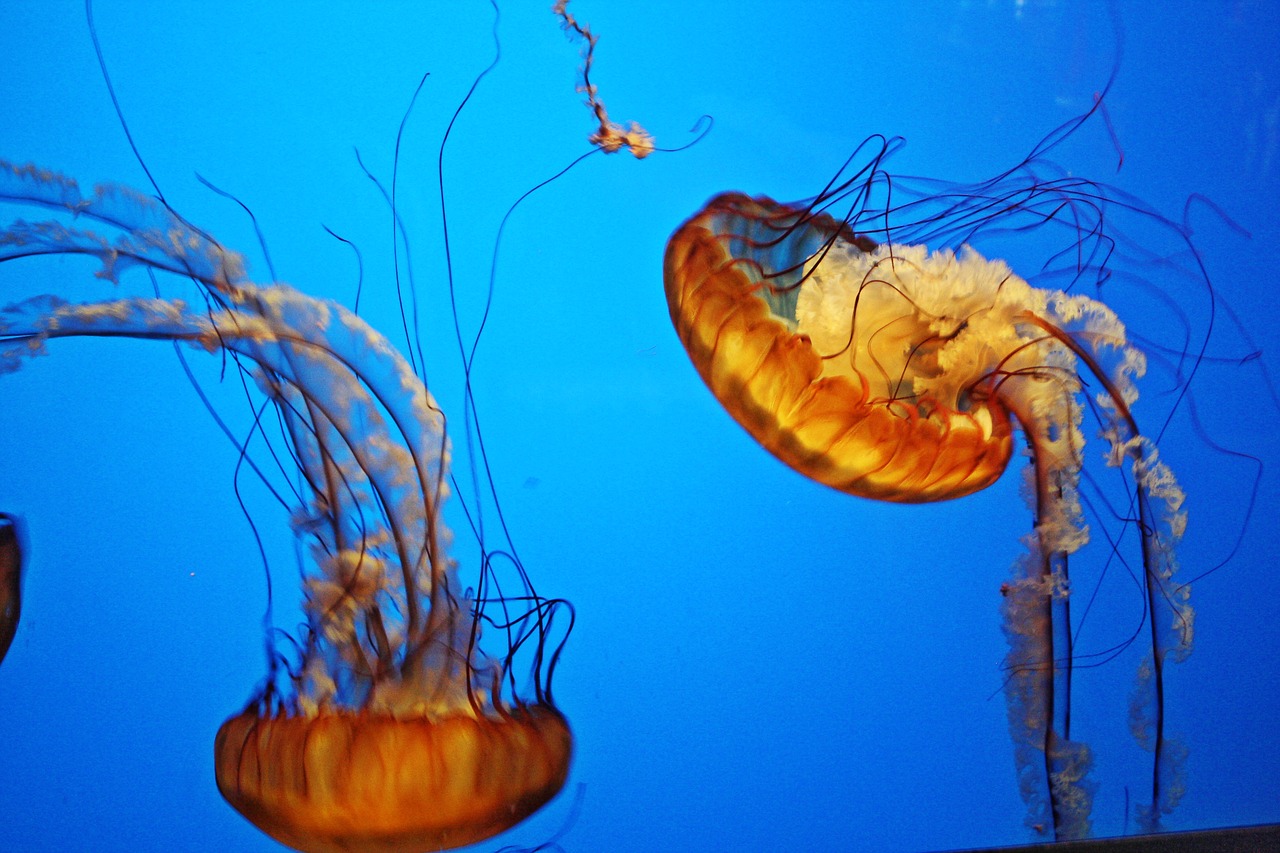 The oceans are an essential part of Earth’s water cycle. Since they cover so much of the planet, most evaporation comes from the ocean and most precipitation falls on the oceans.The oceans are also home to an enormous amount of life. That is, they have tremendous biodiversity. Tiny ocean plants create the base of a food web that supports all sorts of life forms. Marine life makes up the majority of all biomass on Earth. (Biomass is the total mass of living organisms in a given area.) These organisms supply us with food and even the oxygen created by marine plants.

Recall from the chapter on Plate Tectonics that the ocean floor is not flat. Mid-ocean ridges, deep sea trenches, and other features all rise sharply above or plunge deeply below the abyssal plains. In fact, Earth’s tallest mountain is Mauna Kea volcano, which rises 10,203 m (33,476 ft.) from the Pacific Ocean floor to become one of the volcanic mountains of Hawaii. The deepest canyon is also on the ocean floor, the Challenger Deep in the Marianas Trench, 10,916 m (35,814 ft). The mapping of the ocean floor and coastal margins is called bathymetry.The continental margin is the transition from the land to the deep sea or, geologically speaking, from continental crust to oceanic crust. More than one-quarter of the ocean basin is continental margin. 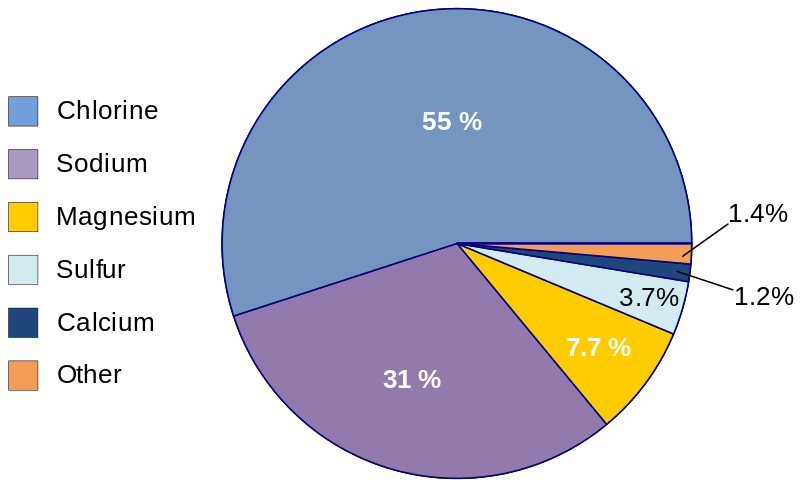 Water is a polar molecule so it can dissolve many substances such as salts, sugars, acids, bases, and organic molecules. Where does the salt in seawater come from? As water moves through rock and soil on land it picks up ions. This is the flip side of weathering. Salts comprise about 3.5 percent of the mass of ocean water, but the salt content or salinity is different in different locations.In places like estuaries, seawater mixes with fresh water, causing salinity to be much lower than average. Where there is lots of evaporation but little circulation of water, salinity can be much higher. The Dead Sea has 30 percent salinity—nearly nine times the average salinity of ocean water. It is called the Dead Sea because nearly nothing can survive within it because of its salinity. Earthquide has an interactive ocean maps, which can show salinity, temperature, nutrients, and other characteristics.Differences in water density are responsible for deep ocean currents. With so many dissolved substances mixed in seawater, what is the density (mass per volume) of seawater relative to fresh water? Water density increases as: salinity increases; temperature decreases; pressure increases.