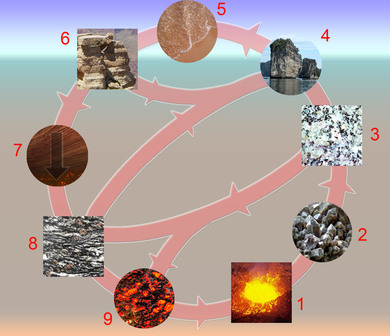 Rocks change as a result of natural processes that are taking place all the time. Most changes happen very slowly; many take place below the Earth’s surface, so we may not even notice the changes. Although we may not see the changes, the physical and chemical properties of rocks are constantly changing in a natural, never-ending cycle called the rock cycle.The concept of the rock cycle was first developed by James Hutton, an eighteenth century scientist often called the “Father of Geology.” Hutton recognized that geologic processes have “no [sign] of a beginning, and no prospect of an end.” The processes involved in the rock cycle often take place over millions of years. So on the scale of a human lifetime, rocks appear to be “rock solid” and unchanging, but in the longer term, change is always taking place.

In the rock cycle the three main rock types are igneous, sedimentary, and metamorphic. Arrows connecting the three rock types show the processes that change one rock type into another. The cycle has no beginning and no end. Rocks deep within the Earth are right now becoming other types of rocks. Rocks at the surface are lying in place before they are next exposed to a process that will change them.