The continental drift hypothesis was developed in the early part of the 20th century, mostly by Alfred Wegener. Wegener said that continents move around on Earth’s surface and that they were once joined together as a single supercontinent. While Wegener was alive, scientists did not believe that the continents could move.Find a map of the continents and cut each one out. Better yet, use a map where the edges of the continents show the continental shelf. That’s the true size and shape of a continent and many can be pieced together like a puzzle. The easiest link is between the eastern Americas and western Africa and Europe, but the rest can fit together too. 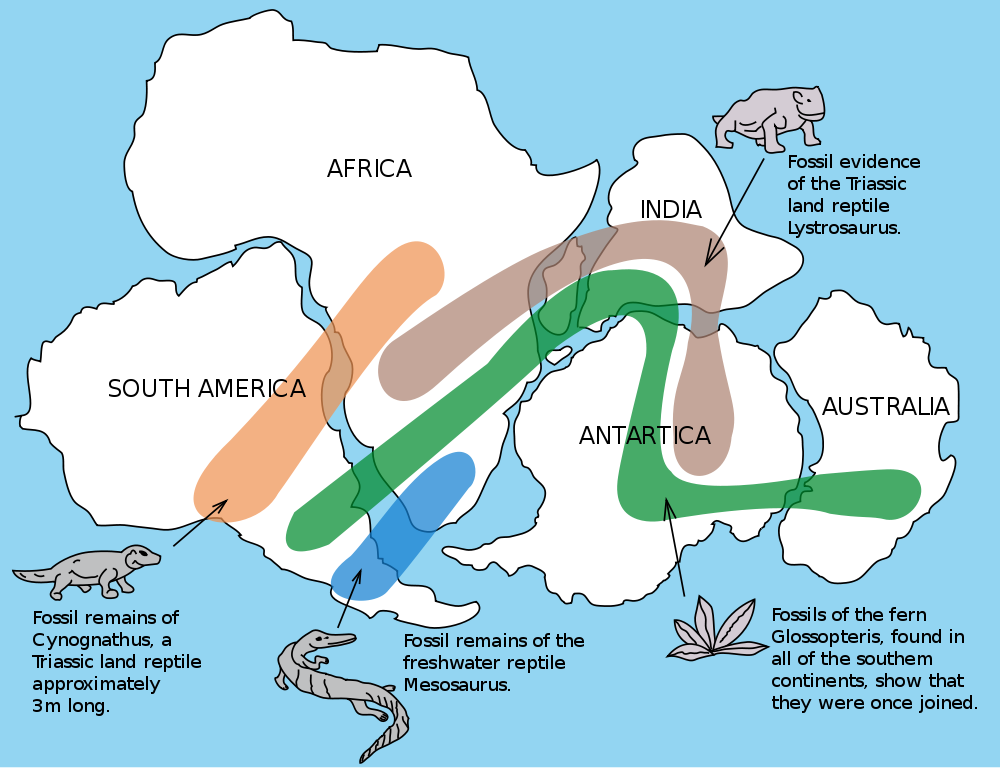 Besides the way the continents fit together, Wegener and his supporters collected a great deal of evidence for the continental drift hypothesis. For one, identical rocks of the same type and age are found on both sides of the Atlantic Ocean. Wegener said the rocks had formed side-by-side and that the land had since moved apart.Mountain ranges with the same rock types, structures, and ages are now on opposite sides of the Atlantic Ocean. The Appalachians of the eastern United States and Canada, for example, are just like mountain ranges in eastern Greenland, Ireland, Great Britain, and Norway. Wegener concluded that they formed as a single mountain range that was separated as the continents drifted.Ancient fossils of the same species of extinct plants and animals are found in rocks of the same age but are on continents that are now widely separated. Wegener proposed that the organisms had lived side by side, but that the lands had moved apart after they were dead and fossilized. He suggested that the organisms would not have been able to travel across the oceans. For example, the fossils of the seed fern Glossopteris were too heavy to be carried so far by wind. The reptile Mesosaurus could only swim in fresh water. was a swimming reptile but could only swim in fresh water. Cynognathus and Lystrosaurus were land reptiles and were unable to swim.Grooves and rock deposits left by ancient glaciers are found today on different continents very close to the equator. This would indicate that the glaciers either formed in the middle of the ocean and/or covered most of the Earth. Today glaciers only form on land and nearer the poles. Wegener thought that the glaciers were centered over the southern land mass close to the South Pole and the continents moved to their present positions later on.Coral reefs and coal-forming swamps are found in tropical and subtropical environments, but ancient coal seams and coral reefs are found in locations where it is much too cold today. Wegener suggested that these creatures were alive in warm climate zones and that the fossils and coal later had drifted to new locations on the continents.Although Wegener’s evidence was sound, most geologists at the time rejected his hypothesis of continental drift. Scientists argued that there was no way to explain how solid continents could plow through solid oceanic crust. Wegener’s idea was nearly forgotten until technological advances presented even more evidence that the continents moved and gave scientists the tools to develop a mechanism for Wegener’s drifting continents.