A rock fall are the fastest of all landslide types and occurs when a rock falls through the air until it comes to rest on the ground—not too complicated. In Utah, they are common in the spring and fall because of freeze-thaw weathering. In the daytime, temperatures in the spring and fall tend to be above freezing, which allows liquid water to enter cracks within rocks.

At night, the temperatures cool below freezing and the water within the rocks freezes and expands which causes the rock to break more. The following morning, the ice will melt and go deeper within the crack to refreeze later that night. This freeze-thaw action over time can cause rocks to break off and fall to the ground. The debris the accumulates at the base of these steep slopes is called talus.

Rotational slides occur when the a landslide occurs in a curved manner concave to the sky. When this type of slide occurs, the upper surface of the slide tilts backwards toward the original slope and the lower surface moves away from the slope. They are common when the soil tends to be deep in clay or soft sediment deposits. The video on the right is a large landslide again in Taiwan in early September 2013 following every rainfall. Needless to say, they were having a bad few days in the region. 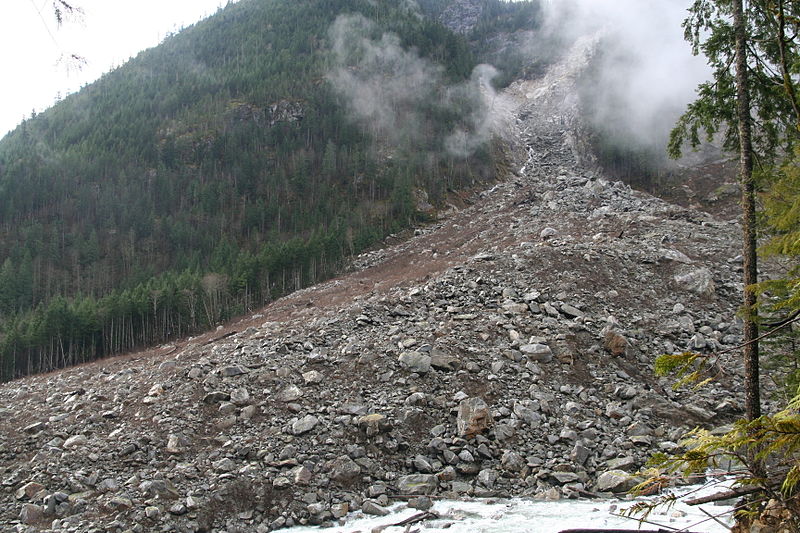 Debris flows are one of the most common, but most dangerous of the various types of landslides because of their speed and consistency. Debris flows tend to be a mixture of rock and water with two to three times the density of flooding streams. That density allows debris flows strip away the land and pick up objects as large as school buses. Debris flows are most common at the mouth of canyons along alluvial fans. Lets first explain an alluvial fan. When floods occur within the mouth of a canyon, either because of intense thunderstorms or snow melt, the erosive power of the water can pick up sediment and boulders – a debris flow. Now once the debris flow reaches the mouth of a canyon, the sediment gets deposited in a fan-shaped delta called an alluvial fan. The problem is that people like to live along alluvial fans because of their scenic view on the canyon. Another influence of debris flows is wildfires. When a wildfire strips an area of its vegetation, the bare soil is easily eroded away in either a thunderstorm or snow melt creating these debris flows. Because of Utah’s topography and tendency to wildfires, debris flows are quite common. 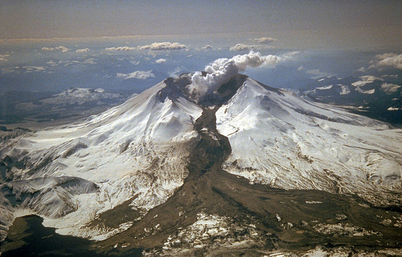 Lahars were mentioned in the module on volcanoes, but in essence they are volcanic landslides. Recall that volcanoes eject pyroclastic material ranging is size from ash to boulders. Now there tends to be two ways lahars occur. One is if a thunderstorm precipitates large amounts of moisture on the pyroclastic material and the pyroclastics flow down slope. The other option is if a volcano is snow-capped and the heat from the volcano causes some of the snow to melt and mix with the pyroclastic material. What makes lahars so dangerous is that they have the consistency of concrete and can travel hundreds of miles. For a breakdown of potential landslide types in the State of Utah, check out the Utah Geologic Survey.