Before you can learn about plate tectonics, you need to know something about the layers that are found inside Earth. These layers are divided by composition into core, mantle, and crust or by mechanical properties into lithosphere and asthenosphere. Scientists use information from earthquakes and computer modeling to learn about Earth’s interior.Humans have never drilled past Earth’s crust, and yet we know a lot about the composition of the earth’s interior. Rocks yield some clues, but they only reveal information about the outer crust. In rare instances, a mineral, such as a diamond, comes to the surface from deeper down in the crust or the mantle. To learn about Earth’s interior, scientists use energy, recorded by seismographs, to “see” the different layers of the Earth, just like doctors can use an MRI, CT scan, or x-ray to see inside our bodies. 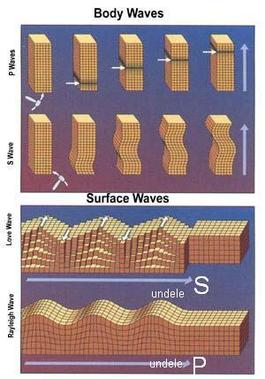 One ingenious way scientists learn about Earth’s interior is by looking at how energy travels from the point of an earthquake, called seismic waves. Seismic waves travel outward in all directions from where the ground breaks at an earthquake. Seismograph stations measure the energy released by these earthquakes, but there are two that scientists are most interested with in regards to understanding the interior of the earth.

Primary waves (also called P-waves) are fastest, traveling at about 6 to 7 kilometers (about 4 miles) per second, so they arrive first at the seismometer. P-waves move in a compression/expansion type motion, squeezing and unsqueezing earth materials as they travel. P-waves bend slightly when they travel from one layer into another. Seismic waves move faster through denser or more rigid material. As P-waves encounter the liquid outer core, which is less rigid than the mantle, they slow down. This makes the P-waves arrive later and further away than would be expected. The result is a P-wave shadow zone. No P-waves are picked up at seismographs 104o to 140o from the earthquakes focus.

Secondary waves (also called S-waves) are about half as fast as P-waves, traveling at about 3.5 km (2 miles) per second, and arrive second at seismographs. S-waves move in an up and down motion perpendicular to the direction of wave travel. This produces a change in shape for the earth materials they move through. Only solids resist a change in shape, so S-waves are only able to propagate through solids. S-waves cannot travel through liquid.

By tracking seismic waves, scientists have learned what makes up the planet’s interior. P-waves slow down at the mantle core boundary, so we know the outer core is less rigid than the mantle. S-waves disappear at the mantle core boundary, so the outer core is liquid. Other clues to Earth’s interior includes the fact that we know that Earth’s overall density is higher than the density of crustal rocks, so the core must be made of something dense, like metal. Also, since Earth has a magnetic field, there must be metal within the planet. Iron and nickel are both magnetic. Finally, meteorites are the remains of the material that formed the early solar system and are thought to be similar to material in Earth’s interior.