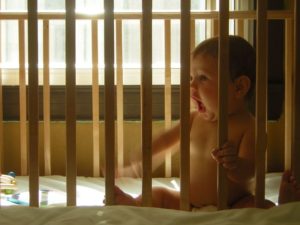 A consumer can be broadly defined as a person who needs, uses, or has used a particular service or product. In this sense, we are all consumers. Consumers make up the largest economic group, affecting and affected by almost every public and private economic decision. Yet often their views are not heard.

Individual consumers tend to be dispersed, while producers and traders can be organized and powerful, with greater access to information. Consumers are therefore more vulnerable to exploitation through deceptive advertising and selling, provision of substandard, fake, and adulterated products, predatory loans and fraudulent, unethical, and monopolistic trade practices. This can result in not only poor value for money, which undermines welfare and efficiency, but also present risks to health and safety. Children, elderly people, disabled people, the poor, uneducated, and illiterate are particularly vulnerable.

The principle of caveat emptor (“buyer beware”) is not sufficient, and consumers need specific protections, and the rights to safety, choice, information, and redress. Consumer protection supports economic prosperity, as it enables honest and efficient businesses to compete, and it helps consumers make the best use of resources.

The choices people make as consumers can affect their health, safety, welfare, and financial security, and that of those around them and the wider environment. Choices also offer a means by which people can influence society. Demographic changes, economic growth, international trade, and technology innovation are opening up new opportunities for consumer welfare, but they’re are also creating new challenges. Enabling people to be informed and active consumers is critical to developing a participative, critical, and competent citizenship. 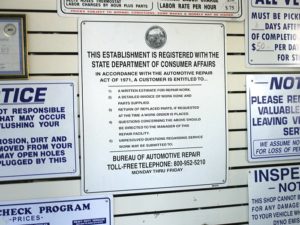 Consumer protection laws often mandate the posting of notices such as this one, which appears in all automotive repair shops in California.

In the United States a range of laws at both the federal and state levels regulate consumer affairs. Federal consumer protection laws are mainly enforced by the Federal Trade Commission, the Consumer Financial Protection Bureau, the Food and Drug Administration, and the U.S. Department of Justice. The function of such legislation is to protect consumers from unscrupulous business practices or potentially dangerous products. Several of the most far-reaching pieces of consumer protection legislation are discussed below.

The Fair Credit Reporting Act is U.S. Federal Government legislation enacted to promote the accuracy, fairness, and privacy of consumer information contained in the files of consumer reporting agencies. It was intended to protect consumers from the willful and/or negligent inclusion of inaccurate information in their credit reports. To that end, the FCRA regulates the collection, dissemination, and use of consumer information, including consumer credit information. Together with the Fair Debt Collection Practices Act (“FDCPA”), the FCRA forms the foundation of consumer rights law in the United States. It was originally passed in 1970 and is enforced by the U.S. Federal Trade Commission and the Consumer Financial Protection Bureau.

The Fair Debt Collection Practices Act (FDCPA), is a consumer protection amendment to the Consumer Credit Protection Act, establishing legal protection from abusive debt collection practices. The statute’s stated purposes are to eliminate abusive practices in the collection of consumer debts, to promote fair debt collection, and to provide consumers with an avenue for disputing and obtaining validation of debt information in order to ensure the information’s accuracy. The act creates guidelines under which debt collectors may conduct business, defines rights of consumers involved with debt collectors, and prescribes penalties and remedies for violations of the act.

The United States Federal Food, Drug, and Cosmetics Act  is a set of laws passed by Congress in 1938 giving authority to the U.S. Food and Drug Administration (FDA) to oversee the safety of food, drugs, and cosmetics. It covers everything from food coloring (Red Dye #6) to bottled water, homeopathic remedies, and medical devices.

At the state level, many states have adopted the Uniform Deceptive Trade Practices Act. This statute allows local prosecutors or the attorney general to press charges against people who knowingly use deceptive business practices in a consumer transaction, and it authorizes consumers to hire a private attorney to bring an action seeking their actual damages, punitive damages, and attorney’s fees. The deceptive trade practices prohibited by the Uniform Act can be roughly subdivided into conduct involving the following:

Also, the majority of states have a Department of Consumer Affairs devoted to regulating certain industries and protecting consumers who use goods and services from those industries. For example, in California, the California Department of Consumer Affairs regulates about 2.3 million professionals in more than 230 different professions, through its forty regulatory entities. In addition, California encourages its consumers to act as private attorneys general through the liberal provisions of its Consumers Legal Remedies Act. Other states have been the leaders in specific aspects of consumer protection. For example, Florida, Delaware, and Minnesota have legislated requirements that contracts be written at reasonable readability levels, because a large proportion of contracts cannot be understood by most consumers who sign them.

Antitrust legislation is essentially another type of consumer protection. The goal of such legislation is to protect consumers against unfair business practices that limit competition or control prices. In 1980, Congress passed the first antitrust law, the Sherman Act, as a “comprehensive charter of economic liberty aimed at preserving free and unfettered competition as the rule of trade.” In 1914, Congress passed two additional antitrust laws: the Federal Trade Commission Act, which created the FTC, and the Clayton Act. With some revisions, these are the three core federal antitrust laws still in effect today.

The antitrust laws proscribe unlawful mergers and business practices in general terms, leaving courts to decide which ones are illegal based on the facts of each case. Courts have applied the antitrust laws to changing markets, from a time of horse and buggies to the present digital age. Yet for more than one hundred years, the antitrust laws have had the same basic objective: to protect the process of competition for the benefit of consumers, making sure there are strong incentives for businesses to operate efficiently, keep prices down, and keep quality up.

The Sherman Act outlaws “every contract, combination, or conspiracy in restraint of trade,” and any “monopolization, attempted monopolization, or conspiracy or combination to monopolize.” Long ago, the Supreme Court decided that the Sherman Act does not prohibit every restraint of trade, only those that are unreasonable. For instance, in some sense, an agreement between two individuals to form a partnership restrains trade, but not necessarily unreasonably, and thus may be lawful under the antitrust laws. On the other hand, certain acts are considered so harmful to competition that they are almost always illegal. These include plain arrangements among competing individuals or businesses to fix prices, divide markets, or rig bids. These acts are “per se” violations of the Sherman Act; in other words, no defense or justification is allowed.

The penalties for violating the Sherman Act can be severe. Although most enforcement actions are civil, the Sherman Act is also a criminal law, and individuals and businesses that violate it may be prosecuted by the Department of Justice. Criminal prosecutions are typically limited to intentional and clear violations such as when competitors fix prices or rig bids. The Sherman Act imposes criminal penalties of up to $100 million for a corporation and $1 million for an individual, along with up to ten years in prison. Under federal law, the maximum fine may be increased to twice the amount the conspirators gained from the illegal acts or twice the money lost by the victims of the crime, if either of those amounts is more than $100 million.

The Clayton Act addresses specific practices that the Sherman Act does not clearly prohibit, such as mergers and interlocking directorates (that is, the same person making business decisions for competing companies). Section 7 of the Clayton Act prohibits mergers and acquisitions where the effect “may be substantially to lessen competition, or to tend to create a monopoly.” As amended by the Robinson-Patman Act of 1936, the Clayton Act also bans certain discriminatory prices, services, and allowances in dealings between merchants. The Clayton Act was amended again in 1976 by the Hart-Scott-Rodino Antitrust Improvements Act to require companies planning large mergers or acquisitions to notify the government of their plans in advance. The Clayton Act also authorizes private parties to sue for triple damages when they have been harmed by conduct that violates either the Sherman or Clayton Act and to obtain a court order prohibiting the anticompetitive practice in the future.