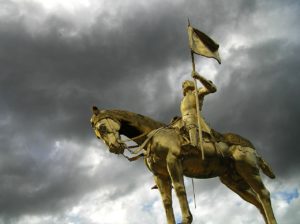 The late management guru Peter Drucker was one of the first to recognize this shift in the roles and relationships of managers and employees. He identified the emergence of the “knowledge worker” and the profound impact that would have on the way business is organized. With the rise of the knowledge worker, “one does not ‘manage’ people,” Drucker wrote. “The task is to lead people. And the goal is to make productive the specific strengths and knowledge of every individual.”[2]

Narcissistic leaders are known for being interested only in themselves, at the expense of others, such as employees or group members. The leader’s narcissism may be healthy or destructive, although there is a continuum in between. To critics, the narcissistic leader—especially one with destructive narcissism—is driven by unyielding arrogance, self-absorption, and a personal egotistic need for power and admiration. A study published in Personality and Social Psychology Bulletin suggests that when a group is without a leader, a narcissist often takes charge; researchers found that people who score high in narcissism tend to take control of leaderless groups. Freud considered “the narcissistic type . . . especially suited to act as a support for others, to take on the role of leaders and to . . . impress others as being ‘personalities’.”