The Meaning and Purposes of Law 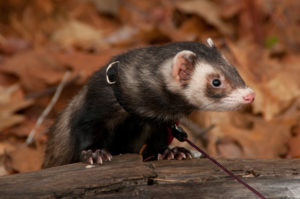 Law has been defined as “a body of rules of action or conduct prescribed by a controlling authority, and having binding legal force. That which must be obeyed and followed by citizens subject to sanctions or legal consequence is a law.”[1]

Although intended to protect the fundamental rights and liberties of U.S. citizens, the legal system and its laws are not always readily understood by the average citizen. At what point do we cross that fine line between legal and illegal, and on what basis is that line even drawn in the first place? Most people understand (and accept) laws prohibiting acts of murder, thievery, physical harm, and financial malfeasance, but there are plenty of other laws that might give us pause. For example, in Minnesota, any game in which participants attempt to capture a greased or oiled pig is illegal. The same laws also prohibits turkey scrambles.[2] Don’t attempt to substitute a ferret for a hunting dog in West Virginia. Anyone who hunts, catches, takes, kills, injures, or pursues a wild animal or bird with a ferret will face a fine of no less than $100 (but no more than $500) and no fewer than 10 (but no more than 100) days in jail. [3] While you may never have considered taking part in a turkey scramble or hunting with a ferret, chances are good that you have broken some law at some time—perhaps even in the last twenty-four hours. Did you exceed a speed limit while driving? Roll through a stop sign at an empty intersection while riding your bike? Drive to the minimart without wearing your seatbelt? Although unlikely that you will be prosecuted and jailed for these minor traffic offenses, the fact is that you broke the law. Why do we have so many laws? Let’s take a closer look at the role of law in society and why laws are created in the first place.

The Purposes of Law

In a society such as the United States, the law informs everyday life in a wide variety of ways and is reflected in numerous branches of law. For example, contract law regulates agreements to exchange goods, services, or anything else of value, so it includes everything from buying a bus ticket to trading options on a derivatives market. Property law defines people’s rights and duties toward tangible property, including real estate (i.e., real property, such as land or buildings,) and their other possessions (i.e., personal property, such as clothes, books, vehicles, and so forth), and intangible property, such as bank accounts and shares of stock. Tort law provides for compensation when someone or their property is harmed, whether in an automobile accident or by defamation of character. Those are fields of civil law, which deals with disputes between individuals. Offenses against a federal, state, or local community itself are the subject of criminal law, which provides for the government to punish the offender.

The law serves many purposes. Four principal ones are establishing standards, maintaining order, resolving disputes, and protecting liberties and rights.

The law is a guidepost for minimally acceptable behavior in society. Some activities, for instance, are crimes because society (through a legislative body) has determined that it will not tolerate certain behaviors that injure or damage persons or their property. For example, under a typical state law, it is a crime to cause physical injury to another person without justification—doing so generally constitutes the crime of assault.[4]

This is an offshoot of establishing standards. Some semblance of order is necessary in a civil society and is therefore reflected in law. The law—when enforced—provides order consistent with society’s guidelines. Wildlife management laws, for example, (such as West Virginia’s prohibition against using ferrets for hunting,) were first passed in an effort to conserve game that had nearly been hunted into extinction during the nineteenth century. Such laws reflect the value society places on protecting wildlife for future generations to enjoy.[5]

Disputes are unavoidable in a society comprised of persons with different needs, wants, values, and views. The law provides a formal means for resolving disputes—the court system.[6]

The constitutions and statutes of the United States and its states provide for various liberties and rights. One function of the law is to protect these various liberties and rights from violations or unreasonable intrusions by persons, organizations, or government. For example, subject to certain exceptions, the First Amendment to the Constitution prohibits the government from making a law that prohibits the freedom of speech. Someone who believes that his free speech rights have been prohibited by the government may pursue a remedy by bringing a case in the courts.[7] 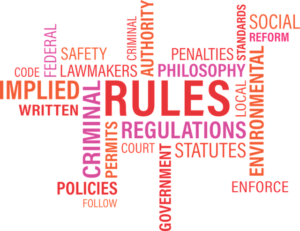 The Rule of Law

What is the rule of law? Aren’t laws and rules the same thing? You can think of the rule of law as the rules that govern the law. The rule of law is the legal principle that law should govern a nation, as opposed to being governed by arbitrary decisions of individual government officials. It primarily refers to the influence and authority of law within society, particularly as a constraint upon behavior, including behavior of government officials. The phrase can be traced back to sixteenth-century Britain, and in the following century, the Scottish theologian Samuel Rutherford used the phrase in his argument against the divine right of kings. The concept, if not the phrase, was familiar to ancient philosophers such as Aristotle, who wrote, “Law should govern.”

Rule of law implies that every citizen is subject to the law, including lawmakers themselves. In this sense, the rule of law stands in contrast to an autocracy, dictatorship, or oligarchy, in which the rulers are held above the law. Lack of the rule of law can be found in both democracies and dictatorships, because of neglect or ignorance of the law, for example, and the rule of law is more apt to deteriorate if a government has insufficient corrective mechanisms for restoring it. If you’ve ever read Alice’s Adventures in Wonderland (or seen the movie), and you can recall the Queen of Hearts yelling, “Off with their heads!” at the slightest infraction or offense, you have some idea of what it would be like to live in a society that is not governed by the rule of law.

The rule of law system in the United States is established in the U.S. Constitution. The U.S. Constitution itself became the law of the land well over two hundred years ago, and the tenets set forth in the document remain in full force today. The way in which the Constitution is applied, though, has always been subject to court interpretation. As circumstances and public opinion evolve through the years, so too do the interpretations offered by the courts. From time to time, it even becomes necessary to amend the Constitution to keep pace with changes in the country’s beliefs and values.

The establishment of a system of laws was not invented by the founding fathers of the United States. The idea of written laws goes back to ancient Mesopotamian culture that prospered long before the Bible was written or the civilizations of the Greeks or Romans flowered. In fact, the oldest known evidence of a law code is tablets from the ancient city Ebla (Tell Mardikh in modern-day Syria). They date to about 2400 BCE. However, most scholars credit Hammurabi’s Code as the origin of written laws and a formal legal system. If you haven’t heard of Hammurabi, you have certainly heard one of his laws: “An eye for an eye, and a tooth for a tooth.” Hammurabi’s Code, a collection of 282 laws inscribed on an upright stone pillar, contains many fundamental legal concepts we would recognize in today’s legal system. In fact, Hammurabi’s reasoning for creating this code is not that far removed from the rationale for our current legal system. In his preface, Hammurabi writes that he sets forth these laws “to bring about the rule of righteousness in the land, to destroy the wicked and the evil-doers; so that the strong should not harm the weak.”