Putting It Together: Financial Markets and System 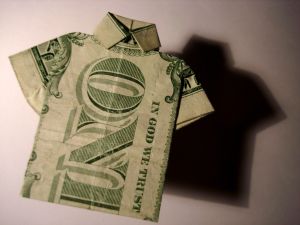 Still have that dollar bill handy that you pulled out earlier when you learned about the Federal Reserve System? Do you think about it the same way you did before you completed this module? Perhaps you do, but now you should have a better understanding of what that dollar bill represents, how it came into existence, and where its value comes from.  Money will always exist in some form, whether it’s based on NFC technology in your iPhone or we go back to a barter system where we trade seashells for bread.  It will still motivate people to work, study, achieve, and unfortunately even break the law. But, as you consider everything you have read and heard in this module, is it the money itself that is the motivator or the “store of value” that we work to obtain? In fact, you can look at that dollar bill and, really, it’s just a piece of paper with a picture of a dead president on its face—it has no intrinsic value.  So where is the value in the dollar bill you’re holding? Is it that our society recognizes it as having value, and business and individuals are willing to “trade” you dollars for shoes, cars, houses, food, and the other things that you need or want in your day-to-day life? Yes, we could go back to trading chickens for shoes, but technology is pushing us further and further away from that model, and as the monetary system evolves, it’s unlikely that it will become less complex. That’s one big reason you’ve spent all this time understanding this thing that “makes the world go ’round.”

This module covered the financial markets and system. Below is a summary of the topics covered in this module.

The four main ways that businesses raise financial capital are: