Corn, squash, and beans. The three most important crops for Mississippian cultures.

Formations made of earth that were used as foundations for Mississippian culture structures.

The Mississippian Period lasted from approximately 800 to 1540 CE. It’s called “Mississippian” because it began in the middle Mississippi River valley, between St. Louis and Vicksburg. However, there were other Mississippians as the culture spread across modern-day US. There were large Mississippian centers in Missouri, Ohio, and Oklahoma.

Although hunting and gathering plants for food was still important, the Mississippians were mainly farmers. They grew corn, beans, and squash, called the “three sisters” by historic Southeastern Indians. The “sisters” provided a stable and balanced diet, making a larger population possible. Thousands of people lived in some larger towns and cities.

A typical Mississipian town was built near a river or creek. It covered about ten acres of ground, and was surrounded by a palisade, a fence made of wooden poles placed upright in the ground. A typical Mississippian house was rectangular, about 12 feet long and 10 feet wide. The walls of a house were built by placing wooden poles upright in a trench in the ground. The poles were then covered with a woven cane matting. The cane matting was then covered with plaster made from mud. This plastered cane matting is called “wattle and daub”. The roof of the house was made from a steep “A” shaped framework of wooden poles covered with grass woven into a tight thatch.

Mississippian artists produced unique art works. They engraved shell pendants with animal and human figures, and carved ceremonial objects out of flint. They sculpted human figures and other objects in stone. Potters molded their clay into many shapes, sometimes decorating them with painted designs. 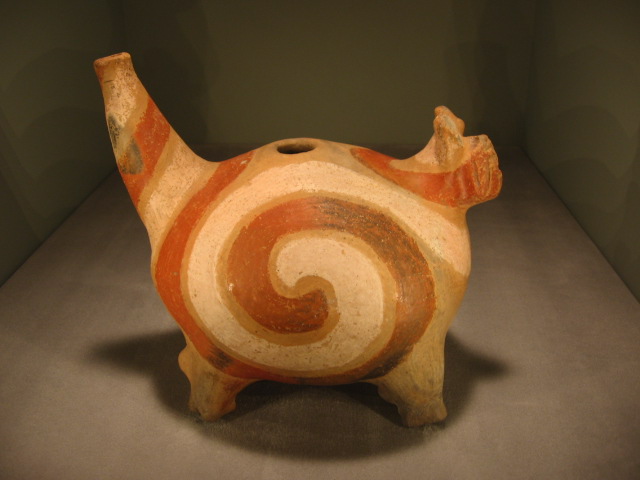 The Nashville area was a major population center during this period. Thousands of Mississippian-era graves have been found in the city, and thousands more may exist in the surrounding area. There were once many temple and burial mounds in Nashville, especially along the Cumberland River.

Decline of the Mississippians

Hernando de Soto was a Spanish explorer who, from 1539-43, lived with and spoke to many Mississippian cultures. After his contact, their cultures were relatively unaffected directly by Europeans, though they were indirectly. Since the natives lacked immunity to new infectious diseases, such as measles and smallpox, epidemics caused so many fatalities that they undermined the social order of many chiefdoms. Some groups adopted European horses and changed to nomadism. Political structures collapsed in many places.By the time more documentary accounts were being written, the Mississippian way of life had changed irrevocably. Some groups maintained an oral tradition link to their mound-building past, such as the late 19th-century Cherokee. Other Native American groups, having migrated many hundreds of miles and lost their elders to diseases, did not know their ancestors had built the mounds dotting the landscape. This contributed to the myth of the Mound Builders as a people distinct from Native Americans.