Facing severe financial crisis, Louis XVI appointed three ministers who tried progressive reforms but failed under the pressure of opposition from the privileged classes of the society.

Assembly of Notables
A group of high-ranking nobles, ecclesiastics, and state functionaries convened by the King of France on extraordinary occasions to consult on matters of state.
estates of the realm
The broad orders of social hierarchy used in Christendom (Christian Europe) from the medieval period to early modern Europe. Different systems for dividing society members into estates evolved over time. The best-known system is the French Ancien Régime (Old Regime), a three-estate system used until the French Revolution (1789–1799). It was made up of clergy (the First Estate), nobility (the Second Estate), and commoners (the Third Estate).
Seven Years’ War
A world war fought between 1754 and 1763, the main conflict occurring in the seven-year period from 1756 to 1763. It involved every European great power of the time except the Ottoman Empire, spanning five continents and affecting Europe, the Americas, West Africa, India, and the Philippines. The conflict split Europe into two coalitions, led by Great Britain on one side and France on the other.
parlements
Provincial appellate courts in the France of the Ancien Régime, i.e. before the French Revolution. They were not legislative bodies but rather the court of final appeal of the judicial system. They typically wielded much power over a wide range of subject matter, particularly taxation. Laws and edicts issued by the Crown were not official in their respective jurisdictions until they gave assent by publication. The members were aristocrats who had bought or inherited their offices and were independent of the King.
Flour War
A wave of riots arising from April to May 1775 in France that followed an increase in grain prices and subsequently bread prices. The riots started after the police withheld grain from the royal stores but were also triggered by poor harvests in the summers of 1773 and 1774.
Estates-General
A general assembly representing the French estates of the realm: the clergy (First Estate), the nobles (Second Estate), and the common people (Third Estate).

When Louis XVI succeeded to the throne in 1774, he was 19 years old. At the time, the government was deeply in debt and resentment of monarchy was on the rise. While the later years of Louis XV’s reign saw serious economic setbacks and the Seven Years’ War (1756–1763) led to an increase in the royal debt and the loss of nearly all of France’s North American possessions, it was not until 1775 that the French economy began enter a true state of crisis. An extended reduction in agricultural prices over the previous twelve years, with dramatic crashes in 1777 and 1786, and climatic events such as the disastrous winters of 1785-1789, contributed to the problem. With the government deeply in debt, Louis XVI was forced to permit radical reforms. He felt unqualified to resolve the situation and surrounded himself with experienced finance ministers.

Anne Robert JacquesTurgot was appointed Controller-General of Finances in 1774. His first act was to submit to the king a statement of his guiding principles: “No bankruptcy, no increase of taxation, no borrowing.” Turgot’s policy, in face of the desperate financial position, was to enforce the most rigid economy in all departments. All departmental expenses were to be submitted for the approval of the controller-general, while Turgot appealed personally to the king against the lavish giving of places and pensions. He also imposed certain conditions on leases as they were renewed or annulled, including those for the manufacture of gunpowder and the administration of the royal mails.

Turgot’s measures succeeded in considerably reducing the deficit and raised the national credit to such an extent that in 1776, just before his fall, he was able to negotiate a loan with Dutch bankers at 4% interest. Nonetheless, the deficit was still so large that it prevented him from substituting for indirect taxation a single tax on land. He suppressed, however, a number of octrois (a local tax collected on various articles brought into a district for consumption)and minor duties, and opposed on grounds of economy, the participation of France in the American Revolutionary War, although without success.Turgot also set to work to establish free trade in grain, but his edict (1774) met with strong opposition although it won the praise of intellectuals. Turgot was hated by those who were interested in speculations in grain, but his worst enemy was the poor harvest of 1774, which led to a rise in the price of bread in the winter and early spring of 1774–1775. The so-called Flour War of 1775, a series of riots against the high price of flour and bread, followed. Turgot showed great firmness in repressing the riots and the king loyally supported his decisions. 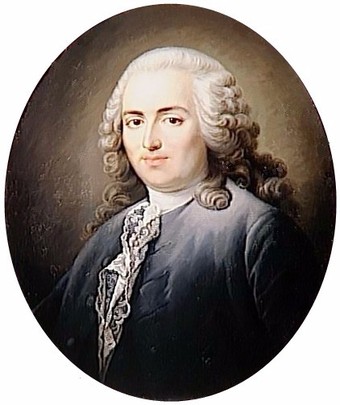 Portrait of Turgot by Antoine Graincourt, now in Versailles.

Turgot, originally considered a physiocrat, is today best remembered as an early advocate for economic liberalism.

All this time Turgot had been preparing his famous Six Edicts, which were finally presented in 1776. Two of them met with violent opposition: the edict suppressing forced unpaid labor and the edict suppressing certain rules by which the craft guilds maintained their privileges. In the preamble to the former, Turgot boldly announced the abolition of privilege and the subjection of all three estates to taxation (although the clergy were afterwards excepted). Soon nearly everybody was against Turgot. His attacks on privilege won him the hatred of the nobles and the parlements; his attempted reforms in the royal household, that of the court; his free trade legislation, that of the financiers; and his views on tolerance and his agitation for the suppression of the phrase that was offensive to Protestants in the king’s coronation oath, that of the clergy. The queen disliked him for opposing the grant of favors to her proteges, which played a key role in the end of his career. With all his enemies, Turgot’s fall was certain. In 1776, he was ordered to resign.

In 1777, JacquesNecker was made director-general of the finances since he could not be controller because of his Protestant faith. He gained popularity by regulating the finances through modest tax and loan reforms. His greatest financial measures were his use of loans to help fund the French debt and raisin  interest rates rather than taxes. He also advocated loans to finance French involvement in the American Revolution. From 1777 to 1781, Necker was essentially in control of all of France’s wealth. In 1781, he published a work (Compte rendu), in which he summarized governmental income and expenditures, giving the first-ever public record of royal finances. It was meant to create a well-informed, interested populace. However, the statistics presented by Necker were completely false and misleading. He wanted to show France in a strong financial position when the reality was actually bleak. France was suffering financially and Necker was blamed for the high debt accrued from the American Revolution. While at court, Necker made many enemies because of his reforming policies. Marie Antoinette was his most formidable enemy and following his wife’s pressure, Louis would become a factor in Necker’s resignation. The king would not reform taxation to bring in more money to cover debts, nor would he allow Necker to be a special adviser because this was strongly opposed by the ministers.

Yet in 1788, the country had been struck by both economic and financial crises, and Necker was called back to the office to stop the deficit and save France from financial ruin. He was seen as the savior of France while the country stood on the brink of ruin, but his actions could not stop the French Revolution. He put a stop to the rebellion in the Dauphiné by legalizing its assembly and then set to work to arrange for the summons of the Estates-General of 1789. He advocated doubling the representation of the Third Estate to satisfy the people. But he failed to address the matter of voting – rather than voting by head count, which is what the people wanted, voting remained as one vote for each estate. Necker was dismissed on July 11, 1789, three days before the storming of the Bastille. The king recalled him on July 19 and Necker stayed in office until 1790, but his efforts to keep the financial situation afloat were ineffective. His popularity vanished and he resigned with a broken reputation. 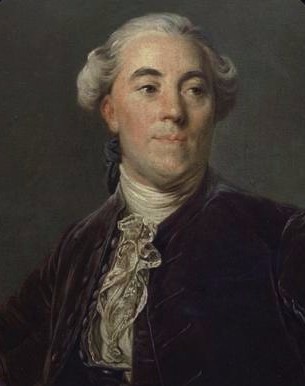 Jacques Necker by Joseph Duplessi. Original was exhibited at the Salon of 1783, now in the Château de Coppet.

When Necker was criticized by his enemies for the Compte rendu, he made public his “Financial Summary for the King,” which appeared to show that France had fought the war in America, paid no new taxes, and still had a massive credit of 10 million livres of revenue.

In 1783, Louis replaced Necker with Charles Alexandre de Calonne, who increased public spending to buy the country’s way out of debt. He took office when France was 110 million livres in debt, partly because of its involvement in the American Revolution, and had no means of paying it. At first he attempted to obtain credit and support the government through loans to maintain public confidence in its solvency. In 1785, he reissued the gold coinage and developed reductions to a basic price of goods or services. Knowing the Parlement of Paris would veto a single land tax payable by all landowners, Calonne persuaded Louis XVI to call the Assembly of Notables to vote on his referendum. Calonne’s eventual reform package consisted of five major points: cut government spending; create a revival of free trade methods; authorize the sale of Church property; equalize salt and tobacco taxes; and establish a universal land value tax. While Turgot and Necker had attempted similar reforms, Calonne attributed their failure to the opposition of the parlements. Therefore, he called the Assembly of Notables in 1787, to which he presented his plan and the deficit in the treasury. Composed of the old regime’s social and political elite, the Assembly balked at the deficit presented to them and despite Calonne’s plan for reform and his backing from the king, they accused the controller-general of being responsible for the enormous financial strains. All the proposed measures failed because of the powerlessness of the crown to impose them. As a last resort, Calonne proposed to the king the suppression of internal customs duties and argued in favor of the taxation of the property of nobles and clergy.Under the pressure of the opposition, Louis XVI dismissed Calonne in 1787 and exiled him to Lorraine. 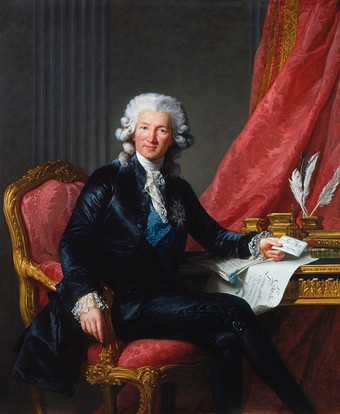 Louis XVI dismissed Calonne in 1787 and exiled him to Lorraine. The joy was general in Paris where Calonne, accused of wishing to raise taxes, was known as Monsieur Déficit. Calonne soon afterwards left for Great Britain, and during his residence there kept up a polemical correspondence with Necker. After his dismissal, Calonne stated, “The King, who assured me a hundred times that he would support me with unshakable firmness, abandoned me, and I succumbed.”