Jansenist
An advocate of a Catholic theological movement, primarily in France, that emphasized original sin, human depravity, the necessity of divine grace, and predestination. The movement originated from the posthumously published work of the Dutch theologian Cornelius Jansen, who died in 1638. Through the 17th and into the 18th centuries, it was a distinct movement within the Catholic Church and was opposed by many in the Catholic hierarchy, especially the Jesuits.
the Pragmatic Sanction of 1713
An edict issued by Charles VI in 1713 to ensure that the Habsburg hereditary possessions could be inherited by a daughter. The Head of the House of Habsburg ruled the Archduchy of Austria, the Kingdom of Hungary, the Kingdom of Croatia, the Kingdom of Bohemia, the Italian territories awarded to Austria by the Treaty of Utrecht, and the Austrian Netherlands. The edict did not affect the office of Holy Roman Emperor because the Imperial crown was elective, not hereditary, although successive elected Habsburg rulers headed the Holy Roman Empire since 1438.
the War of Austrian Succession
A war (1740–1748) that involved most of the powers of Europe over the question of Maria Theresa’s succession to the realms of the House of Habsburg. The war included King George’s War in North America, the War of Jenkins’ Ear (which formally began in October 1739), the First Carnatic War in India, the Jacobite rising of 1745 in Scotland, and the First and Second Silesian Wars.

Maria Theresa (1717 – 1780) was the only female ruler of the Habsburg dominions and the last of the House of Habsburg. She was the sovereign of Austria, Hungary, Croatia, Bohemia, Transylvania, Mantua, Milan, Lodomeria and Galicia, the Austrian Netherlands and Parma. By marriage, she was Duchess of Lorraine, Grand Duchess of Tuscany and Holy Roman Empress. Although her father Charles VI ensured that his daughter, the first woman in the dynasty, would succeed him as the ruler of the Habsburg lands (the Pragmatic Sanction of 1713), the title of Holy Roman Emperor was neither hereditary nor ever held by a woman. The refusal of Prussia and Bavaria to accept Maria Theresa’s rule in 1740 after her father’s death resulted in the War of Austrian Succession (1740-48). In its aftermath, Maria Theresa was recognized as the ruler of the Habsburg lands. However, her title of Holy Roman Empress meant that she was in fact the wife of the Emperor, Francis I, who secured the title as one of Austria’s gains in the same war.

Although Maria Theresa was an  absolutist conservative, this was tempered by pragmatism and she implemented a number of overdue reforms, which were responses to the challenges to her lands but not ideologically framed in the Age of Enlightenment. 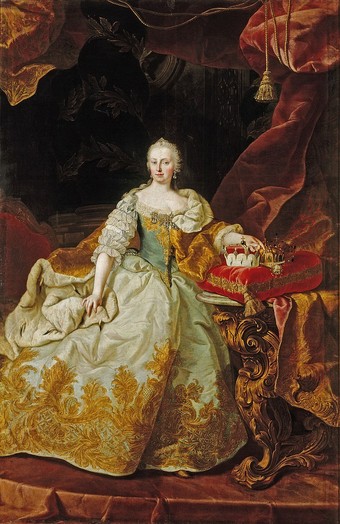 After several diplomatic failures and military defeats in the 1730s, Austria seemed to be declining or even on the verge of collapse. After her forty-year reign, Maria Theresa left a revitalized empire that influenced the rest of Europe through the 19th century.

Maria Theresa was a devout Roman Catholic and believed that religious unity was necessary for a peaceful public life. Consequently, she explicitly rejected the idea of religious toleration but never allowed the Church to interfere with what she considered to be prerogatives of a monarch and kept Rome at arm’s length. She controlled the selection of archbishops, bishops, and abbots. Her approach to religious piety differed from that of her predecessors, as she was influenced by Jansenist ideas. The empress actively supported conversion to Roman Catholicism by securing pensions to the converts. She tolerated Greek Catholics and emphasized their equal status with Roman Catholics. Convinced by her advisors that the Jesuits posed a danger to her monarchical authority, she hesitantly issued a decree that removed them from all the institutions of the monarchy. Though she eventually gave up trying to convert her non-Catholic subjects to Roman Catholicism, Maria Theresa regarded both the Jews and Protestants as dangerous to the state and actively tried to suppress them. The empress was arguably the most anti-Semitic monarch of her time yet like many of her contemporaries, she supported Jewish commercial and industrial activity.

Maria Theresa implemented significant reforms to strengthen Austria’s military and bureaucratic efficiency. She employed Count Friedrich Wilhelm von Haugwitz, who modernized the empire by creating a standing army of 108,000 men paid for with 14 million gulden extracted from each crown-land. The central government was responsible for the army, although Haugwitz instituted taxation of the nobility for the first time. Under Haugwitz, she centralized administration, a task previously left to the nobility and church, along Prussian models with permanent civil service. She also oversaw the unification of the Austrian and Bohemian chancellories in May 1749 and doubled the state revenue between 1754 and 1764, though her attempt to tax clergy and nobility was only partially successful. However, these financial reforms greatly improved the economy.

In 1760, Maria Theresa created the council of state, which served as a committee of experienced people who advised her. The council lacked executive or legislative authority, but nevertheless was distinguishable from the form of government employed by Frederick II of Prussia. Unlike the latter, Maria Theresa was not an autocrat who acted as her own minister. Prussia would adopt this form of government only after 1807. In 1776, Austria outlawed witch burning and torture. It was later reintroduced, but the progressive nature of these reforms remains noted. Despite all these reformist efforts, Maria Theresa did not change her lands’ deeply feudal social order based on privileged landlords and oppressive forced labor of the peasantry.

Maria Theresa invested in reforms that advanced what today would be defined as public health. She recruited Gerard van Swieten, who founded the Vienna General Hospital, revamped Austria’s educational system, and served as the Empress’s personal physician. After calling in van Swieten, Maria Theresa asked him to study the problem of infant mortality in Austria. Following his recommendation, she made a decree that autopsies would be mandatory for all hospital deaths in Graz, Austria’s second largest city. This law – still in effect today – combined with the relatively stable population of Graz, resulted in one of the most important and complete autopsy records in the world. Maria Theresa banned the creation of new burial grounds without prior government permission, thus countering wasteful and unhygienic burial customs. Her decision to have her children inoculated after the smallpox epidemic of 1767 was responsible for changing Austrian physicians’ negative view of inoculation.

Aware of the inadequacy of bureaucracy in Austria and wishing to improve it, Maria Theresa reformed education in 1775. In a new school system based on the Prussian one, all children of both genders had to attend school between ages 6 an 12. Education reform was met with much hostility. Maria Theresa crushed the dissent by ordering the arrest of those who opposed. The reforms, however, were not as successful as expected since no funding was offered from the state, education in most schools remained substandard, and in many parts of the empire forcing parents to send their children to school was ineffective (particularly in the countryside, children were seen as valuable labor force and schooling as a way to take them away from work). The empress permitted non-Catholics to attend university and allowed the introduction of secular subjects such as law, which influenced the decline of theology as the main foundation of university education. Educational reform also included that of Vienna University by Swieten from 1749, the founding of the Theresianum (1746) as a civil service academy, and other new military and foreign service academies.

Maria Theresa as a widow in 1773, by Anton von Maron

Maria Theresa was devastated by her husband’s (Francis I) death. Their eldest son, Joseph, became Holy Roman Emperor. Maria Theresa abandoned all ornamentation, had her hair cut short, painted her rooms black, and dressed in mourning for the rest of her life. She completely withdrew from court life, public events, and theater. She described her state of mind shortly after Francis’s death: “I hardly know myself now, for I have become like an animal with no true life or reasoning power.”