Louis XVI and Marie Antoinette’s marriage confirmed and strengthened the Franco-Austrian alliance, which had many opponents among French elites and commoners.

Seven Years’ War
A world war fought between 1754 and 1763, the main conflict occurring in the seven-year period from 1756 to 1763. It involved every European great power of the time except the Ottoman Empire, spanning five continents and affecting Europe, the Americas, West Africa, India, and the Philippines. The conflict split Europe into two coalitions, led by Great Britain on one side and France on the other.
Diplomatic Revolution of 1756
The reversal of longstanding alliances in Europe between the War of the Austrian Succession and the Seven Years’ War. Austria went from an ally of Britain to an ally of France. Prussia became an ally of Britain. It was part of efforts to preserve or upset the European balance of power.
War of the Bavarian Succession
A 1778 – 1779 conflict between a Saxon-Prussian alliance and Austria to prevent the Habsburgs from acquiring the Electorate of Bavaria. Although the war consisted of only a few minor skirmishes, thousands of soldiers died from disease and starvation, earning the conflict the name Kartoffelkrieg (Potato War) in Prussia and Saxony.
Dauphin
The title given to the heir apparent to the throne of France from 1350 to 1791 and 1824 to 1830.

Maria Antonia (1755 – 1793), commonly known as Marie Antoinette, was born in Vienna as the youngest daughter of Empress Maria Theresa, ruler of the Habsburg Empire, and her husband Francis I, Holy Roman Emperor. Shortly after her birth, she was placed under the care of the Governess of the Imperial children, Countess von Brandeis. Despite the private tutoring she received, results of her schooling were less than satisfactory. At the age of ten, she could not write correctly in German or in any language commonly used at court, such as French and Italian. Conversations with her were stilted although she became a good musician. She played the harp, the harpsichord, and the flute, had a beautiful singing voice, and excelled at dancing.

Following the Seven Years’ War and the Diplomatic Revolution of 1756, Empress Maria Theresa decided to end hostilities with her longtime enemy, King Louis XV of France. Their common desire to destroy the ambitions of Prussia and Great Britain and help secure a definitive peace between them led them to seal their alliance with a marriage: in 1770, Louis XV formally asked the hand of Maria Antonia for his eldest surviving grandson, future Louis XVI. Maria Antonia formally renounced all her rights to the Habsburg domains and was married to the Dauphin of France the same year. Upon her arrival in France, she adopted the French version of her name: Marie Antoinette.

The couple’s failure to produce children for several years placed a strain upon their marriage, exacerbated by the publication of obscene pamphlets mocking their infertility. The reasons behind the couple’s initial failure to have children were debated at that time and have been since. The marriage was reportedly consummated in 1773 but historians have concluded it did not take place until 1777.Eventually, in spite of their early difficulties, the royal couple became the parents of four children.

The French public was hostile towards the marriage. France’s alliance with Austria pulled the country into the disastrous Seven Years’ War, in which it was defeated by the British both in Europe and in North America. By the time that Louis and Marie Antoinette were married, the French were generally critical of the Austrian alliance and many saw Marie Antoinette as an unwelcome foreigner. Simultaneously, the Dauphine was beautiful, personable, and well-liked by the common people. Her first official appearance in Paris in 1773 was a resounding success. 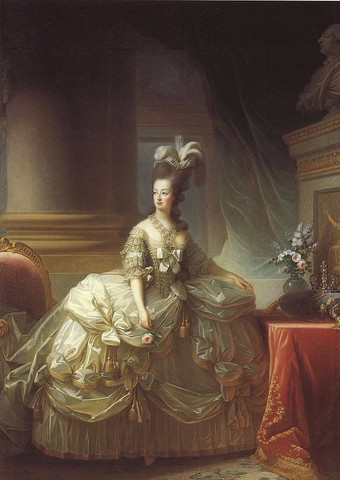 The queen spent heavily on fashion, luxuries, and gambling, although the country was facing a grave financial crisis. For her, Rose Bertin created dresses, hair styles such as poufs up to three feet high and the panache (bundle of feathers). She and her court also adopted the English fashion of dresses made of indienne (a material banned in France from 1686 until 1759), percale, and muslin. By the time of the Flour War of 1775, a series of riots against the high price of flour and bread, her reputation among the general public was damaged.

Upon the death of Louis XV in 1774, the Dauphin ascended the throne as King Louis XVI of France and Navarre, and Marie Antoinette became Queen of France and Navarre. At the outset, the new queen had limited political influence with her husband. Marie Antoinette’s first child, Marie-Thérèse Charlotte, was born in 1778, but in the middle of the queen’s pregnancy her brother made claims on the throne of Bavaria (the War of the Bavarian Succession). Marie Antoinette pleaded with her husband for the French to intercede on behalf of Austria. The Peace of Teschen (1779) ended the brief conflict, with the queen imposing French mediation on the demand of her mother and Austria’s gaining a territory of at least 100,000 inhabitants, a strong retreat from the early French position of hostility toward Austria with the impression, partially justified, that the queen sided with Austria against France.

The queen played a very important role in supporting the American Revolution by securing Austrian and Russian support for France, which resulted in the establishment of a neutral league that stopped Great Britain’s attack and by weighing in decisively for the nomination of Philippe Henri, marquis de Ségur, as Minister of War and Charles Eugène Gabriel de La Croix, marquis de Castries, Secretary of the Navy in 1780. The two helped George Washington in defeating the British in the American Revolutionary War, which ended in 1783.

In 1783, the queen also played a decisive role in the nomination of Charles Alexandre de Calonne as Controller-General of Finances, and of the baron de Breteuil as the Minister for the Maison du Roi (Minister of the Royal Household), making him perhaps the strongest and most conservative minister of the reign. As a result of these nominations, Marie Antoinette’s influence became paramount in government, and the new ministers rejected any major change to the structure of the old regime. More than that, the decree by de Ségur requiring four quarterings of nobility as a condition for the appointment of officers blocked the access of commoners to important positions in the armed forces.

Empress Maria Theresa died in 1780 and Marie Antoinette feared the death of her mother would jeopardize the Franco-Austrian alliance, but her brother, Joseph II, Holy Roman Emperor, assured her that he had no intention of breaking the alliance. Joseph II visited his sister in 1781 to reaffirm the Franco-Austrian alliance, but his visit was tainted with rumors that Marie Antoinette was sending money from the French treasury to Austria.In the same year, Marie Antoinette gave birth to her second child, Louis Joseph Xavier François, Dauphin of France. Despite the general celebration over the birth of the Dauphin, Marie Antoinette’s political influence, such as it was, did greatly benefit Austria. This together with the queen’s extravagant and expensive lifestyle contributed to her growing unpopularity.