Napoleon’s Italian victories overshadowed his Egyptian defeats during the French Revolutionary Wars, while his position at home strengthened after the Directory became dependent on the military. This made Napoleon the greatest enemy of the same government that relied on his protection.

Review Napoleon’s career from the military to the Directory

Thermidorian Reaction
A 1794 coup d’état within the French Revolution against the leaders of the Jacobin Club that dominated the Committee of Public Safety. It was triggered by a vote of the National Convention to execute Maximilien Robespierre, Louis Antoine de Saint-Just, and several other leaders of the revolutionary government. It ended the most radical phase of the French Revolution.
Committee of Public Safety
A committee created in April 1793 by the National Convention and restructured in July 1793 that formed the de facto executive government in France during the Reign of Terror (1793–94), a stage of the French Revolution.
13 Vendémiaire
A name given to an October 5, 1795,  battle between the French Revolutionary troops and royalist forces in the streets of Paris. The battle was largely responsible for the rapid advancement of Republican General Napoleon Bonaparte’s career. The name comes from the date of the battle according to the French Republican Calendar.
Directory
A five-member committee that governed France from November 1795, when it replaced the Committee of Public Safety, until it was overthrown by Napoleon Bonaparte in the Coup of 18 Brumaire (November 8-9, 1799) and replaced by the Consulate. It gave its name to the final four years of the French Revolution.
National Convention
A single-chamber assembly in France from September 20, 1792, to October 26, 1795, during the French Revolution. It succeeded the Legislative Assembly and founded the First Republic after the Insurrection of August 10, 1792.
Coup of 18th Brumaire
A bloodless coup d’état under the leadership of Napoleon Bonaparte that overthrew the Directory, replacing it with the French Consulate. It took place on November 9, 1799, 18 Brumaire, Year VIII under the French Republican Calendar.
French Revolutionary Wars
A series of sweeping military conflicts lasting from 1792 until 1802, resulting from the French Revolution. They pitted the French First Republic against Britain, Austria, and several other monarchies. They are divided in two periods: the War of the First Coalition (1792–1797) and the War of the Second Coalition (1798–1802). Initially confined to Europe, the fighting gradually assumed a global dimension as the political ambitions of the Revolution expanded.
Coup of 18 Fructidor
A seizure of power by members of the French Directory on September 4, 1797, when their opponents, the Royalists, were gaining strength.

Napoleon Bonaparte (1769 – 1821) was a French military and political leader who rose to prominence during the French Revolution and led several successful campaigns during the Revolutionary Wars. As Napoleon I, he was emperor of the French from 1804 until 1814, and again in 1815. He dominated European and global affairs for more than a decade while leading France against a series of coalitions in the Napoleonic Wars. He remains one of the most celebrated and controversial political figures in human history.

Upon graduating from the prestigious École Militaire (military academy) in Paris in September 1785, Bonaparte was commissioned as a second lieutenant in an artillery regiment. He served in Valence and Auxonne until after the outbreak of the Revolution in 1789 and took nearly two years’ leave in Corsica (where he was born and spent his early years) and Paris during this period. At this time, he was a fervent Corsican nationalist. He spent the early years of the Revolution in Corsica, fighting in a complex three-way struggle among royalists, revolutionaries, and Corsican nationalists. He was a supporter of the republican Jacobin movement, organizing clubs in Corsica, and was given command over a battalion of volunteers. He was promoted to captain in the regular army in 1792, despite exceeding his leave of absence and leading a riot against a French army in Corsica.

He returned to Corsica and came into conflict with the Corsican leader Pasquale Paoli, who decided to split with France and sabotage the French assault on the Sardinian island of La Maddalena. Bonaparte and his family fled to the French mainland in June 1793 because of the conflict with Paoli. 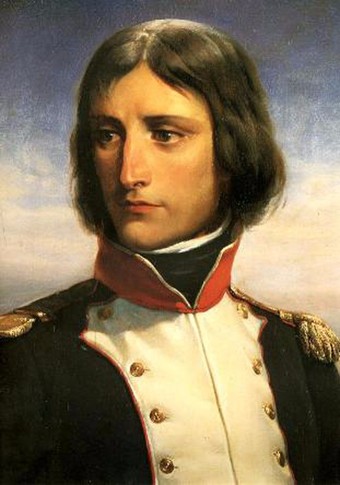 Napoleon Bonaparte, aged 23, lieutenant-colonel of a battalion of Corsican Republican volunteers, paitning by Henri Félix Emmanuel Philippoteaux, ca. 1834. Born and raised in Corsica, Napoleon’s first language was Corsican and he always spoke French with a marked Corsican accent . The Corsican Buonapartes were descended from minor Italian nobility of Tuscan origin, who had come to Corsica from Liguria in the 16th century. His father Carlo Buonaparte was named Corsica’s representative to the court of Louis XVI in 1777.

Bonaparte was promoted to brigadier general at the age of 24. Catching the attention of the Committee of Public Safety, he was put in charge of the artillery of France’s Army of Italy. He devised plans for attacking the Kingdom of Sardinia as part of France’s campaign against the First Coalition. The French army carried out Bonaparte’s plan in the Battle of Saorgio in April 1794 and then advanced to seize Ormea in the mountains. From Ormea, they headed west to outflank the Austro-Sardinian positions around Saorge. After this campaign, he was sent on a mission to the Republic of Genoa to determine that country’s intentions towards France.

Rise as a Military Leader

Following the fall of Robespierre and the Thermidorian Reaction in July 1794, Napoleon, although closely associated with Robespierre, was released from the arrest within two weeks. He was asked to draw up plans to attack Italian positions in the context of France’s war with Austria. He also took part in an expedition to take back Corsica from the British, but the French were repelled by the British Royal Navy.

In October 1795, royalists in Paris declared a rebellion against the National Convention. Paul Barras, a leader of the Thermidorian Reaction, knew of Bonaparte’s earlier military exploits and gave him command of the improvised forces in defense of the Convention in the Tuileries Palace. Napoleon had seen the massacre of the King’s Swiss Guard there three years earlier and realized that artillery would be the key to its defense. He ordered a young cavalry officer named Joachim Murat to seize large cannons and used them to repel the attackers on October 5, 1795 (13 Vendémiaire in the French Republican Calendar). 1,400 royalists died and the rest fled.  The defeat of the royalist insurrection extinguished the threat to the Convention and earned Bonaparte sudden fame, wealth, and the patronage of the new government, the Directory. He was promoted to Commander of the Interior and given command of the Army of Italy.

During the French Revolutionary Wars, Napoleon was successful in a daring invasion of Italy. In the Montenotte Campaign, he separated the armies of Sardinia and Austria, defeating each one in turn, and then forced a peace on Sardinia. Following this, his army captured Milan and started the Siege of Mantua. Bonaparte defeated successive Austrian armies under three different leaders while continuing the siege.

The next phase of the conflict featured the French invasion of the Habsburg heartlands. In the first encounter between the two armies, Napoleon pushed back his opponents and advanced deep into Austrian territory. The Austrians were alarmed by the French thrust that reached all the way to Leoben, not very far from Vienna, and finally decided to sue for peace. The Treaty of Leoben, followed by the more comprehensive Treaty of Campo Formio, gave France control of most of northern Italy and the Low Countries, and a secret clause promised the Republic of Venice to Austria. Bonaparte marched on Venice and forced its surrender, ending 1,100 years of independence. He also authorized the French to loot treasures.

In the Italian campaign, Bonaparte’s army captured 150,000 prisoners, 540 cannons, and 170 standards. The French army fought 67 actions and won 18 pitched battles through superior artillery technology and Bonaparte’s tactics. During the campaign, Bonaparte became increasingly influential in French politics. The royalists attacked Bonaparte for looting Italy and warned that he might become a dictator. Bonaparte also sent General Pierre Augereau to Paris to lead a coup d’état and purge the royalists on September  4 (Coup of 18 Fructidor). This left Barras and his republican allies in control again but dependent on Bonaparte, who proceeded to peace negotiations with Austria. These negotiations resulted in the Treaty of Campo Formio, and Bonaparte returned to Paris in December as a hero. He met Talleyrand, France’s new Foreign Minister—who served in the same capacity for Emperor Napoleon—and they began to prepare for an invasion of Britain.

Bonaparte decided on a military expedition to seize Egypt and thereby undermine Britain’s access to its trade interests in India. Bonaparte wished to establish a French presence in the Middle East, with the ultimate dream of linking with Tipu Sultan, a Muslim enemy of the British in India. In May 1798, Bonaparte was elected a member of the French Academy of Sciences. His Egyptian expedition included a group of 167 scientists, with mathematicians, naturalists, chemists, and geodesists among them (their discoveries included the Rosetta Stone).

General Bonaparte and his expedition eluded pursuit by the Royal Navy and landed at Alexandria in July. In August, the British fleet under Horatio Nelson captured or destroyed all but two French vessels in the Battle of the Nile, defeating Bonaparte’s goal to strengthen the French position in the Mediterranean. In early 1799, he moved an army into the Ottoman province of Damascus (Syria and Galilee). Bonaparte led 13,000 French soldiers in the conquest of the coastal towns of Arish, Gaza, Jaffa, and Haifa. The attack on Jaffa was particularly brutal. Bonaparte discovered that many of the defenders were former prisoners of war, ostensibly on parole, so he ordered the garrison and 1,400 prisoners to be executed by bayonet or drowning to save bullets. Men, women, and children were robbed and murdered for three days.

Bonaparte began with an army of 13,000 men: 1,500 were reported missing, 1,200 died in combat, and thousands perished from disease. He failed to reduce the fortress of Acre, so he marched his army back to Egypt in May. To speed up the retreat, Bonaparte ordered plague-stricken men to be poisoned with opium. The number who died remains disputed, ranging from a low of 30 to a high of 580. He also brought out 1,000 wounded men.

Despite the failures in Egypt, Napoleon returned to a hero’s welcome. He allied with a number of prominent political figures tooverthrew the Directory by a coup d’état on November 9, 1799 (Coup of 18th Brumaire, according to the revolutionary calendar), closing down the Council of Five Hundred. Napoleon became “first consul” for ten years, and appointed two consuls who had consultative voices only. His power was confirmed by the new Constitution of 1799, which preserved the appearance of a republic but in reality established a dictatorship.