The Century of Peace

29.1.1: The European Continent After Vienna

Post-Napoleonic Europe was characterized by a general lack of major conflict between the great powers, with Great Britain as the major hegemonic power bringing relative balance to European politics.

hegemonic
The political, economic, or military predominance or control of one state over others.
Concert of Europe
Also known as the Congress System or the Vienna System after the Congress of Vienna, a system of dispute resolution adopted by the major conservative powers of Europe to maintain their power, oppose revolutionary movements, weaken the forces of nationalism, and uphold the balance of power. It is suggested that it operated in Europe from the end of the Napoleonic Wars (1815) to the early 1820s, while some see it as lasting until the outbreak of the Crimean War, 1853-1856.
Belle Époque
A period of Western European history conventionally dated from the end of the Franco-Prussian War in 1871 to the outbreak of World War I around 1914. Occurring during the era of the French Third Republic (beginning 1870), it was characterized by optimism, regional peace, economic prosperity and technological, scientific and cultural innovations. In the climate of the period, especially in Paris, the arts flourished.
Pax Britannica
The period of relative peace in Europe (1815–1914) during which the British Empire became the global hegemonic power and adopted the role of a global police force.

The 19th century was the century marked by the collapse of the Spanish, Napoleonic, Holy Roman, and Mughal empires. This paved the way for the growing influence of the British Empire, the Russian Empire, the United States, the German Empire, the French colonial empire, and Meiji Japan, with the British boasting unchallenged dominance after 1815. After the defeat of the French Empire and its allies in the Napoleonic Wars, the European powers came together at the Congress of Vienna in 1815 to reorganize the political map of Europe to preserve peace and balance of power, termed the Concert of Europe.

The British and Russian empires expanded significantly and became the world’s leading powers. The Russian Empire expanded in central and far eastern Asia. The British Empire grew rapidly in the first half of the century, especially with the expansion of vast territories in Canada, Australia, South Africa, and heavily populated India, and in the last two decades of the century in Africa. By the end of the century, the British Empire controlled a fifth of the world’s land and one-quarter of the world’s population. During the post-Napoleonic era, it enforced what became known as the Pax Britannica, which had ushered in unprecedented globalization, industrialization, and economic integration on a massive scale.

At the beginning of this period, there was an informal convention recognizing five Great Powers in Europe: the French Empire, the British Empire, the Russian Empire, the Austrian Empire (later Austria-Hungary), and the Kingdom of Prussia (later the German Empire). In the late 19th century, the newly united Italy was added to this group. By the early 20th century, two non-European states, Japan and the United States, would come to be respected as fellow Great Powers.

The entire era lacked major conflict between these powers, with most skirmishes taking place between belligerents within the borders of individual countries. In Europe, wars were much smaller, shorter, and less frequent than ever before. The quiet century was shattered by World War I (1914–18), which was unexpected in its timing, duration, casualties, and long-term impact.

Pax Britannica (Latin for “British Peace,” modeled after Pax Romana) was the period of relative peace in Europe (1815–1914) during which the British Empire became the global hegemonic power and adopted the role of a global police force.

Between 1815 and 1914, a period referred to as Britain’s “imperial century,” around 10 million square miles of territory and roughly 400 million people were added to the British Empire. Victory over Napoleonic France left the British without any serious international rival, other than perhaps Russia in central Asia. When Russia tried expanding its influence in the Balkans, the British and French defeated it in the Crimean War (1854–56), thereby protecting the by-then feeble Ottoman Empire.

Britain’s Royal Navy controlled most of the key maritime trade routes and enjoyed unchallenged sea power. Alongside the formal control it exerted over its own colonies, Britain’s dominant position in world trade meant that it effectively controlled access to many regions, such as Asia and Latin America. British merchants, shippers, and bankers had such an overwhelming advantage over everyone else that in addition to its colonies it had an informal empire.

The global superiority of British military and commerce was aided by a divided and relatively weak continental Europe and the presence of the Royal Navy on all of the world’s oceans and seas. Even outside its formal empire, Britain controlled trade with countries such as China, Siam, and Argentina. Following the Congress of Vienna, the British Empire’s economic strength continued to develop through naval dominance and diplomatic efforts to maintain a balance of power in continental Europe.

In this era, the Royal Navy provided services around the world that benefited other nations, such as the suppression of piracy and blocking the slave trade. The Slave Trade Act 1807 banned the trade across the British Empire, after which the Royal Navy established the West Africa Squadron and the government negotiated international treaties under which they could enforce the ban. Sea power, however, did not project on land. Land wars fought between the major powers include the Crimean War, the Franco-Austrian War, the Austro-Prussian War, and the Franco-Prussian War, as well as numerous conflicts between lesser powers. The Royal Navy prosecuted the First Opium War (1839–1842) and Second Opium War (1856–1860) against Imperial China. The Royal Navy was superior to any other two navies in the world, combined. Between 1815 and the passage of the German naval laws of 1890 and 1898, only France was a potential naval threat.

The Pax Britannica was weakened by the breakdown of the continental order established by the Congress of Vienna. Relations between the Great Powers of Europe were strained to breaking by issues such as the decline of the Ottoman Empire, which led to the Crimean War, and later the emergence of new nation states of Italy and Germany after the Franco-Prussian War. Both wars involved Europe’s largest states and armies. The industrialization of Germany, the Empire of Japan, and the United States contributed to the relative decline of British industrial supremacy in the early 20th century. 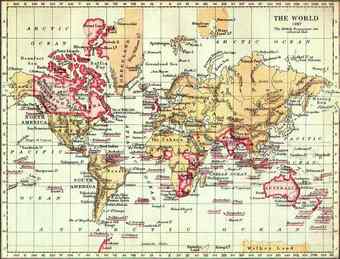 Pax Britannica: Map of the world from 1897. The British Empire (marked in pink) was the superpower of the 19th century.

The Belle Époque (French for “Beautiful Era”) was a period of Western European history conventionally dated from the end of the Franco-Prussian War in 1871 to the outbreak of World War I in around 1914. Occurring during the era of the French Third Republic (beginning 1870), it was a period characterized by optimism, regional peace, economic prosperity, and technological, scientific and cultural innovations. In the climate of the period, especially in Paris, the arts flourished. Many masterpieces of literature, music, theater, and visual art gained recognition. The Belle Époque was named, in retrospect, when it began to be considered a “Golden Age” in contrast to the horrors of World War I.

In the United Kingdom, the Belle Époque overlapped with the late Victorian era and the Edwardian era. In Germany, the Belle Époque coincided with the Wilhelminism; in Russia with the reigns of Alexander III and Nicholas II. In the newly rich United States emerging from the Panic of 1873, the comparable epoch was dubbed the Gilded Age. In Brazil it started with the end of the Paraguayan War, and in Mexico the period was known as the Porfiriato.

The years between the Franco-Prussian War and World War I were characterized by unusual political stability in western and central Europe. Although tensions between the French and German governments persisted as a result of the French loss of Alsace-Lorraine to Germany in 1871, diplomatic conferences, including the Congress of Berlin in 1878, the Berlin Congo Conference in 1884, and the Algeciras Conference in 1906, mediated disputes that threatened the general European peace. For many Europeans in the Belle Époque period, transnational, class-based affiliations were as important as national identities, particularly among aristocrats. An upper-class gentleman could travel through much of Western Europe without a passport and even reside abroad with minimal bureaucratic regulation. World War I, mass transportation, the spread of literacy, and various citizenship concerns changed this.

European politics saw very few regime changes, the major exception being Portugal, which experienced a republican revolution in 1910. However, tensions between working-class socialist parties, bourgeois liberal parties, and landed or aristocratic conservative parties increased in many countries, and some historians claim that profound political instability belied the calm surface of European politics in the era. In fact, militarism and international tensions grew considerably between 1897 and 1914, and the immediate prewar years were marked by a general armaments competition in Europe. Additionally, this era was one of massive overseas colonialism known as the New Imperialism. The most famous portion of this imperial expansion was the Scramble for Africa.