The Popularization of Science

21.1.3: The Popularization of Science

Scientific societies and academies and the unprecedented popularization of science among an increasingly literate population dominated the Age of Enlightenment.

Encyclopaedia, or a Systematic Dictionary of the Sciences, Arts, and Crafts
A general encyclopedia published in France between 1751 and 1772, with later supplements, revised editions, and translations. It had many writers, known as the Encyclopédistes, and was edited by Denis Diderot and until 1759 co-edited by Jean le Rond d’Alembert. It is most famous for representing the thought of the Enlightenment.
Scientific Revolution
The emergence of modern science during the early modern period, when developments in mathematics, physics, astronomy, biology (including human anatomy) and chemistry transformed society’s views about nature. It began in Europe towards the end of the Renaissance period and continued through the late 18th century, influencing the intellectual social movement known as the Enlightenment. While its dates are disputed, the publication of Nicolaus Copernicus’s De revolutionibus orbium coelestium (On the Revolutions of the Heavenly Spheres) in 1543 is often cited as its beginning.
Conversations on the Plurality of Worlds
A popular science book by French author Bernard le Bovier de Fontenelle published in 1686. It offered an explanation of the heliocentric model of the Universe, suggested by Nicolaus Copernicus in his 1543 work De revolutionibus orbium coelestium. The book, written in French and not in Latin as most scientific works of the era, was one of the first attempts to explain scientific theories in a popular language understandable to the wide audience.

Science during the Enlightenment was dominated by scientific societies and academies, which largely replaced universities as centers of scientific research and development. These organizations grew out of the Scientific Revolution as the creators of scientific knowledge in contrast to the scholasticism of the university. During the Enlightenment, some societies created or retained links to universities. However, contemporary sources distinguished universities from scientific societies by claiming that the university’s utility was in the transmission of knowledge, while societies functioned to create knowledge. As the role of universities in institutionalized science began to diminish, learned societies became the cornerstone of organized science. After 1700, many official academies and societies were founded in Europe, with more than seventy official scientific societies in existence by 1789. In reference to this growth, Bernard de Fontenelle coined the term “the Age of Academies” to describe the 18th century.

National scientific societies were founded in the urban hotbeds of scientific development across Europe. In the 17th century, the Royal Society of London (1662), the Paris Académie Royale des Sciences (1666), and the Berlin Akademie der Wissenschaften (1700) came into existence. In the first half of the 18th century, the Academia Scientiarum Imperialis (1724) in St. Petersburg, and the Kungliga Vetenskapsakademien (Royal Swedish Academy of Sciences) (1739) were created. Many regional and provincial societies followed along with some smaller private counterparts. Official scientific societies were chartered by the state to provide technical expertise, which resulted in direct, close contact between the scientific community and government bodies. State sponsorship was beneficial to the societies as it brought finance and recognition along with a measure of freedom in management. Most societies were granted permission to oversee their own publications, control the election of new members, and otherwise provide administration. Membership in academies and societies was highly selective. Activities included research, experimentation, sponsoring essay contests, and collaborative projects between societies.

Academies and societies served to disseminate Enlightenment science by publishing the scientific works of their members as well as their proceedings. With the exception of the Philosophical Transactions of the Royal Society by the Royal Society of London, which was published on a regular, quarterly basis, publication schedules were typically irregular, with periods between volumes sometimes lasting years. These and other limitations of academic journals left considerable space for the rise of independent periodicals, which excited scientific interest in the general public. While the journals of the academies primarily published scientific papers, independent periodicals were a mix of reviews, abstracts, translations of foreign texts, and sometimes derivative, reprinted materials. Most of these texts were published in the local vernacular, so their continental spread depended on the language of the readers. For example, in 1761, Russian scientist Mikhail Lomonosov correctly attributed the ring of light around Venus, visible during the planet’s transit, as the planet’s atmosphere. However, because few scientists understood Russian outside of Russia, his discovery was not widely credited until 1910. With a wider audience and ever-increasing publication material, specialized journals emerged, reflecting the growing division between scientific disciplines in the Enlightenment era. 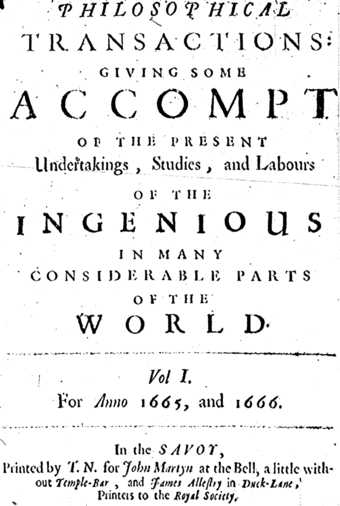 The Philosophical Transactions was established in 1665 as the first journal in the world exclusively devoted to science. It is still published by the Royal Society, which also makes it the world’s longest-running scientific journal. The use of the word “Philosophical” in the title refers to “natural philosophy,” which was the equivalent of what would now be generally called science.

Although dictionaries and encyclopedias have existed since ancient times, they evolved from simply a long list of definitions to detailed discussions of those words in 18th-century encyclopedic dictionaries. The works were part of an Enlightenment movement to systematize knowledge and provide education to a wider audience than the educated elite. As the 18th century progressed, the content of encyclopedias also changed according to readers’ tastes. Volumes tended to focus more strongly on secular affairs, particularly science and technology, rather than on matters of theology. The most well-known of these works is Denis Diderot and Jean le Rond d’Alembert’s Encyclopaedia, or a Systematic Dictionary of the Sciences, Arts, and Crafts. The work, which began publication in 1751, was composed of thirty-five volumes and more than 71,000 separate entries. Many entries describe the sciences and crafts in detail. The massive work was arranged according to a “tree of knowledge.” The tree reflected the marked division between the arts and sciences, largely a result of the rise of empiricism. Both areas of knowledge were united by philosophy, the trunk of the tree of knowledge.

Science and the Public

During Enlightenment, the discipline of science began to appeal to a consistently growing audience. An increasingly literate population seeking knowledge and education in both the arts and the sciences drove the expansion of print culture and the dissemination of scientific learning. The British coffeehouse is an early example of this phenomenon, as their establishment created a new public forum for political, philosophical, and scientific discourse. In the mid-16th century, coffeehouses cropped up around Oxford, where the academic community began to capitalize on the unregulated conversation the coffeehouse allowed. The new social space was used by some scholars as a place to discuss science and experiments outside the laboratory of the official institution. Education was a central theme, and some patrons began offering lessons to others. As coffeehouses developed in London, customers heard lectures on scientific subjects such as astronomy and mathematics for an exceedingly low price.

Public lecture courses offered scientists unaffiliated with official organizations a forum to transmit scientific knowledge and their own ideas, leading to the opportunity to carve out a reputation and even make a living. The public, on the other hand, gained both knowledge and entertainment from demonstration lectures. Courses varied in duration from one to four weeks to a few months or even the entire academic year and were offered at virtually any time of day. The importance of the lectures was not in teaching complex scientific subjects, but rather in demonstrating the principles of scientific disciplines and encouraging discussion and debate.Barred from the universities and other institutions, women were often in attendance at demonstration lectures and constituted a significant number of auditors.

Increasing literacy rates in Europe during the Enlightenment enabled science to enter popular culture through print. More formal works included explanations of scientific theories for individuals lacking the educational background to comprehend the original scientific text. The publication of Bernard de Fontenelle’s Conversations on the Plurality of Worlds (1686) marked the first significant work that expressed scientific theory and knowledge expressly for the laity, in the vernacular and with the entertainment of readers in mind. The book specifically addressed women with an interest in scientific writing and inspired a variety of similar works written in a discursive style. These were more accessible to the reader than complicated articles, treatises, and books published by the academies and scientists.

During the Enlightenment, women were excluded from scientific societies, universities, and learned professions. They were educated, if at all, through self-study, tutors, and by the teachings of more open-minded family members and relatives. With the exception of daughters of craftsmen, who sometimes learned their fathers’ professions by assisting in the workshop, learned women were primarily part of elite society. In addition, women’s inability to access scientific instruments (e.g., microscope) made it difficult for them to conduct independent research.

Despite these limitations, many women made valuable contributions to science during the 18th century. Two notable women who managed to participate in formal institutions were Laura Bassi and the Russian Princess Yekaterina Dashkova. Bassi was an Italian physicist who received a PhD from the University of Bologna and began teaching there in 1732. Dashkova became the director of the Russian Imperial Academy of Sciences of St. Petersburg in 1783. Her personal relationship with Empress Catherine the Great allowed her to obtain the position, which marked in history the first appointment of a woman to the directorship of a scientific academy. More commonly, however, women participated in the sciences as collaborators of their male relative or spouse. Others became illustrators or translators of scientific texts. 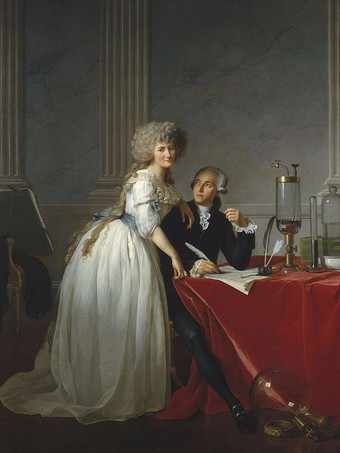 Portrait of M. and Mme Lavoisier, by Jacques-Louis David, 1788, Metropolitan Museum of Art.

Women usually participated in the sciences through an association with a male relative or spouse. For example, Marie-Anne Pierette Paulze worked collaboratively with her husband, Antoine Lavoisier. Aside from assisting in Lavoisier’s laboratory research, she was responsible for translating a number of English texts into French for her husband’s work on the new chemistry. Paulze also illustrated many of her husband’s publications, such as his Treatise on Chemistry (1789).