Social scientists define global poverty in different ways and take into account the complexities and the issues of relativism described above. Relative poverty is a state of living where people can afford necessities but are unable to meet their society’s average standard of living. People often disparage “keeping up with the Joneses”—the idea that you must keep up with the neighbors’ standard of living to not feel deprived. But it is true that you might feel ”poor” if you are living without a car to drive to and from work, without any money for a safety net should a family member fall ill, and without any “extras” beyond just making ends meet. 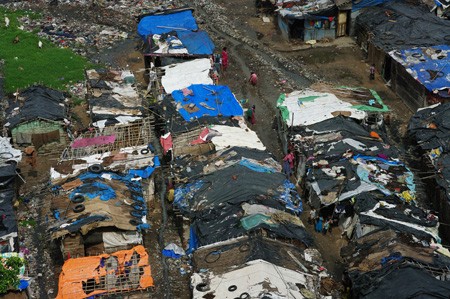 Contrary to relative poverty, people who live in absolute poverty lack even the basic necessities, which typically include adequate food, clean water, safe housing, and access to healthcare. Absolute poverty is defined by the World Bank (2014a) as when someone lives on less than $1.25 a day. According to the most recent estimates, in 2011, about 17 percent of people in the developing world lived at or below $1.25 a day, a decrease of 26 percent compared to ten years ago, and an overall decrease of 35 percent compared to twenty years ago. A shocking number of people––88 million––live in absolute poverty, and close to 3 billion people live on less than $2.50 a day (Shah 2011). If you were forced to live on $2.50 a day, how would you do it? What would you deem worthy of spending money on, and what could you do without? How would you manage the necessities—and how would you make up the gap between what you need to live and what you can afford?

Subjective poverty describes poverty that is composed of many dimensions; it is subjectively present when your actual income does not meet your expectations and perceptions. With the concept of subjective poverty, the poor themselves have a greater say in recognizing when it is present. In short, subjective poverty has more to do with how a person or a family defines themselves. This means that a family subsisting on a few dollars a day in Nepal might think of themselves as doing well, within their perception of normal. However, a westerner traveling to Nepal might visit the same family and see extreme need.

The Underground Economy Around the World

What do the driver of an unlicensed hack cab in New York, a piecework seamstress working from her home in Mumbai, and a street tortilla vendor in Mexico City have in common? They are all members of the underground economy, a loosely defined unregulated market unhindered by taxes, government permits, or human protections. Official statistics before the worldwide recession posit that the underground economy accounted for over 50 percent of nonagricultural work in Latin America; the figure went as high as 80 percent in parts of Asia and Africa (Chen 2001). A recent article in the Wall Street Journal discusses the challenges, parameters, and surprising benefits of this informal marketplace. The wages earned in most underground economy jobs, especially in peripheral nations, are a pittance––a few rupees for a handmade bracelet at a market, or maybe 250 rupees ($5 U.S.) for a day’s worth of fruit and vegetable sales (Barta 2009). But these tiny sums mark the difference between survival and extinction for the world’s poor.

The underground economy has never been viewed very positively by global economists. After all, its members don’t pay taxes, don’t take out loans to grow their businesses, and rarely earn enough to put money back into the economy in the form of consumer spending. But according to the International Labor Organization (an agency of the United Nations), some 52 million people worldwide will lose their jobs due to the ongoing worldwide recession. And while those in core nations know that high unemployment rates and limited government safety nets can be frightening, their situation is nothing compared to the loss of a job for those barely eking out an existence. Once that job disappears, the chance of staying afloat is very slim.

Within the context of this recession, some see the underground economy as a key player in keeping people alive. Indeed, an economist at the World Bank credits jobs created by the informal economy as a primary reason why peripheral nations are not in worse shape during this recession. Women in particular benefit from the informal sector. The majority of economically active women in peripheral nations are engaged in the informal sector, which is somewhat buffered from the economic downturn. The flip side, of course, is that it is equally buffered from the possibility of economic growth.

Even in the United States, the informal economy exists, although not on the same scale as in peripheral and semi-peripheral nations. It might include under-the-table nannies, gardeners, and housecleaners, as well as unlicensed street vendors and taxi drivers. There are also those who run informal businesses, like daycares or salons, from their houses. Analysts estimate that this type of labor may make up 10 percent of the overall U.S. economy, a number that will likely grow as companies reduce head counts, leaving more workers to seek other options. In the end, the article suggests that, whether selling medicinal wines in Thailand or woven bracelets in India, the workers of the underground economy at least have what most people want most of all: a chance to stay afloat (Barta 2009).

1. Maya is a twelve-year-old girl living in Thailand. She is homeless, and often does not know where she will sleep or when she will eat. We might say that Maya lives in _________ poverty.
Show Answer
b

2. Mike, a college student, rents a studio apartment. He cannot afford a television and lives on cheap groceries like dried beans and ramen noodles. Since he does not have a regular job, he does not own a car. Mike is living in:

Show Answer
d
3. Faith has a full-time job and two children. She has enough money for the basics and can pay her rent each month, but she feels that, with her education and experience, her income should be enough for her family to live much better than they do. Faith is experiencing:
Show Answer
b
Show Glossary

absolute poverty:
the state where one is barely able, or unable, to afford basic necessities

relative poverty:
the state of poverty where one is unable to live the lifestyle of the average person in the country

subjective poverty:
a state of poverty composed of many dimensions, subjectively present when one’s actual income does not meet one’s expectations

underground economy:
an unregulated economy of labor and goods that operates outside of governance, regulatory systems, or human protections